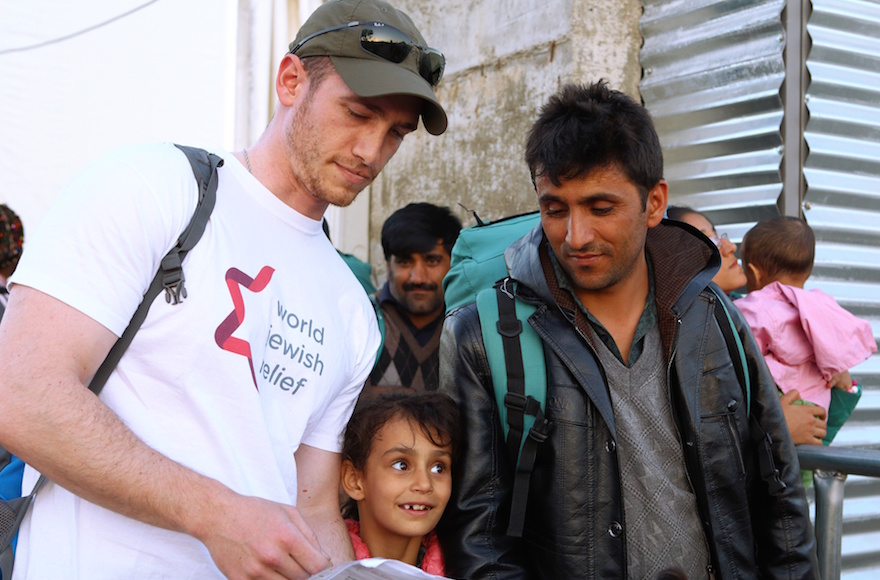 A volunteer with the organization World Jewish Relief works with refugees in Greece. (Minos Alchanati)
Advertisement

NEW YORK (JTA) — Eighty percent of Jews live in two countries — Israel and the United States — but Jewish organizations are spending more and more of their money elsewhere.

Jewish aid to the developing world — the impoverished set of countries your zayde called the “third world” — has grown quickly in the past couple of decades. What used to be a handful of groups has grown to become a constellation of organizations working on anything from solar power in Rwanda to agricultural sustainability in Nepal. Together, the groups aid millions of people.

Jewish global service efforts come from across the Jewish world and provide funding and personnel to a range of causes and places. Now, for the first time, a survey has quantified the industry’s basics: where it works, how many people it helps and how much money it spends. The survey was conducted in March by Olam, an umbrella organization for Jewish global service groups, and was shared with JTA on Monday.

Here are five indicators that explain this booming sector.

Jewish groups spend at least $125 million in the developing world.

While it doesn’t compare to the billions Jews give every year to Israel, the amount Jews give in this sector tops well over $100 million annually. Of the 47 groups Olam covers, 26 reported operating budgets that total $125 million in funding for international development.

Some of those groups are small initiatives, each with a budget of under $100,000 — all of which goes to the developing world. Others are sprawling organizations like the American Jewish Joint Distribution Committee, which dedicates a small but still sizable portion of its $300 million budget to international development.

The reported budgets range from $60,000 to $45 million — the median budget is just shy of $1 million. Some of the largest are the American Jewish World Service and the refugee aid group HIAS, each of which has a budget of approximately $40 million.

The Jewish global service world spans a wide range of causes. Many of the groups work on some form of women’s empowerment and education, while a handful focus directly on goals like alleviating hunger or expanding access to technology.

Altogether, through seminars, direct aid, education or employment programs, the groups help 3 million people. As with the budget figures, five of the groups dominate the field, accounting for 92 percent of the people reached. Because the individual data of the groups has been kept confidential, the survey does not indicate which five groups these are.

Much Jewish international aid work is done either by funding local nonprofits or sending professionals to coordinate aid. But some of the nonprofits’ most visible work is through volunteer programs that send young Jews to work on the ground in the developing world. In total, 19 of the groups surveyed send 1,850 volunteers to do aid work. Of those volunteers, most of them went on short-term programs lasting a week or two, most were college students and nearly all were Jewish. Like the overall Jewish population, nearly four-fifths came from North America or Israel.

The survey found that organizations also use the volunteer trips to reinforce Jewish identity. Eighty-one percent of volunteer experiences had some form of Jewish curriculum, as well as a structured way to observe Shabbat.

The field has expanded rapidly since 2000 and is increasingly centered in Israel.

Some Jewish global service groups are more than a century old. But two-thirds — 20 of the 30 that responded to the survey — were founded in the 21st century. In addition to helping countries across the globe, the organizations also come from countries the world over. While many are based in the U.S. and Canada, others are found in South Africa, Australia or Mexico.

But the plurality of the groups come from the country that’s also the biggest beneficiary of Jewish charity: Israel. The Jewish state is home to 27 of Olam’s 46 member groups, ranging from Brit Olam, an international volunteering group, to Innovation: Africa, which provides solar and agricultural technology to African villages.

Ginsburg says the Israeli global service world has ballooned in recent years due to Israelis’ increased affluence. Also, she adds, Israeli groups can focus on specific areas of international development without having to worry about being their country’s “Jewish” representative in the field, like the American Jewish World Service or Australia’s StandUp.

“There’s this general sense at least among some that Israel is in a place where it can not just think of meeting its own needs, but [can] share some of that with others,” she said. “Many of those are niche organizations with specific areas of expertise, in agriculture, in clean tech, in health care, education, et cetera, so they don’t see themselves as the Israeli or Jewish voice.”

South Asia and East Africa attract the most groups

Jewish service efforts span what activists sometimes call the “global south,” where much of the world’s poverty is found. In total, the groups provide services or aid in 69 countries. But two regions are especially popular aid destinations: South Asia and East Africa.

A dozen groups are active in India, with its vast geography and massive population, while eight are active in Nepal, four in Myanmar and three in Sri Lanka. East Africa’s countries also attract the attention of a range of groups, from 11 that are active in Uganda to nine in Kenya and six in Rwanda.

Notably, both regions have remote Jewish communities. The Abayudaya Jewish community lives in the hills of central Uganda, and the B’nei Menashe hail from the eastern Indian province of Manipur.