80% of Reform rabbis are Democrats. That’s higher than any other clergy. 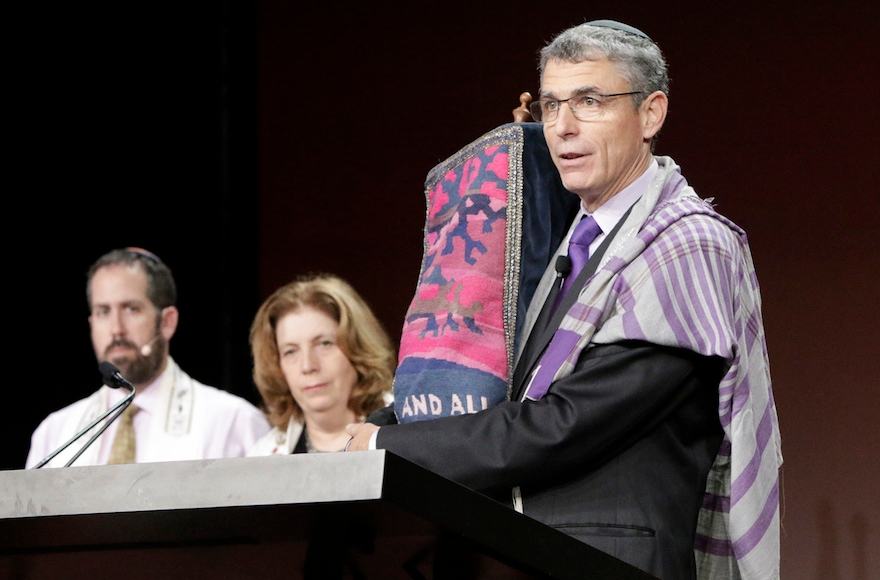 NEW YORK (JTA) — The vast majority of Reform and Conservative rabbis affiliate as Democrats, according to a new study.

The study, published Sunday by Yale University, found that more than 80 percent of Reform rabbis, and about 70 percent of Conservative rabbis, affiliate as Democrats. Both were among the top five most Democratic clergy of the Jewish and Christian denominations in the United States, with Reform rabbis topping the list.

Among Orthodox rabbis, nearly 40 percent identify as Democrats and a quarter as Republicans.

By contrast, Evangelical pastors are almost all Republicans, as are most Baptists. The Black Protestant African Methodist Episcopal clergy, as well as Unitarian ministers, are heavily Democratic. Catholic priests are evenly split between Republicans and Democrats.

Anyone familiar with American Jews won’t be surprised by the data. Solid majorities of American Jews consistently vote for Democrats — 70 percent voted for Hillary Clinton in the November presidential race — with polls showing that Orthodox Jews are more likely to vote Republican. Reform Jews have been on the front lines of protests against President Donald Trump.

“The overwhelming majority of non-Orthodox Jews look at Jewish values and Jewish tradition, and their understanding of them, and come out in a place that’s fairly liberal on the American political spectrum,” said Mark Pelavin, chief program officer for the Union for Reform Judaism. “I don’t think there’s anything new there.”

Orthodox Jews make up about 10 percent of the American Jewish population, various studies show. One-third, or 35 percent, of all U.S. Jews identify with the Reform movement, 18 percent identify with Conservative Judaism, 6 percent with other movements and 30 percent with no denomination, according to the Pew Research Center.

“Clergy in general are more politically active and more likely to take on the distinctive patterns of their followers, more than the followers themselves,” said Cohen, a professor at the Hebrew Union College-Jewish Institute of Religion. “Elites tend toward political poles more than the masses, and clergy are part of the elites.”

The split among Orthodox rabbis reflects Orthodox voters’ focusing more on individual issues than an overarching political ideology, said Nathan Diament, executive director of the Orthodox Union Advocacy Center. He added that, regardless of the movement’s reputation for political conservatism, most of its congregations are still located in “blue” states.

“It’s not about parties, it’s about issues,” Diament said. “In recent years, I would say, from the Orthodox community, there’s been a sense that Republicans have positions that are more attractive with regard to policy on Israel. On the other hand, a lot of people in the Orthodox community, including rabbis, believe in supporting social welfare safety-net programs, which is something that would put them more aligned with Democratic political positions.”

In total, the data cover 130,000 clergy, including approximately 2,700 rabbis. The data were collected via denominational websites cross-referenced with voter registration records. Some denominations and religions — including Mormons and Muslims — are not included due to lack of reliable clergy lists.

“In recent years, the Democrats have been more on the side of rights in regard to women [and] women’s health issues,” said Rabbi Hara Person, the chief strategic officer for the Reform movement’s Central Conference of American Rabbis. “It would seem to me that the more women you have as clergy, the more you’re going to lean toward Democrats.”