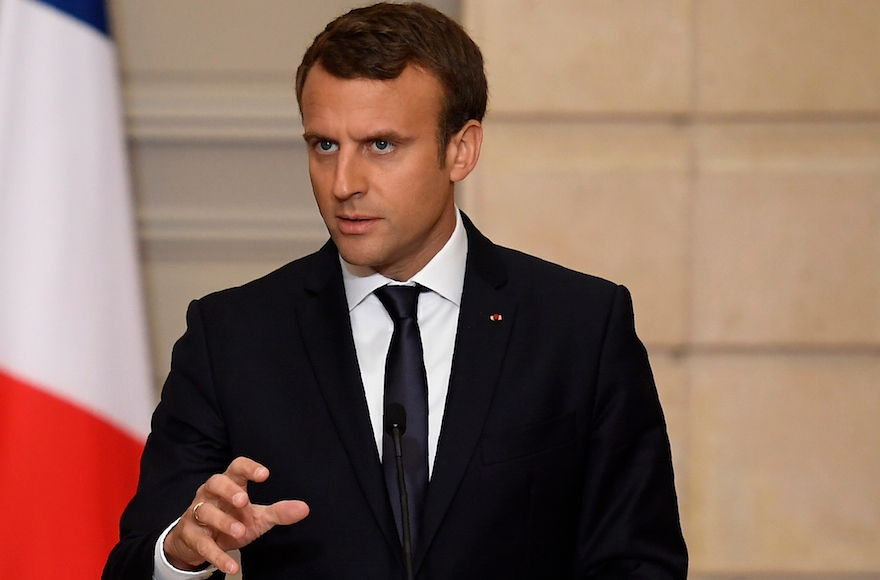 (JTA) – Before he threw Sarah Halimi to her death from a window of her third-story apartment in Paris, 27-year-old Kobili Traore called his Jewish neighbor “Satan” and cried out for Allah.

These and other facts about the April 4 incident that shocked French Jewry are known from testimonies and a recording made by a neighbor, according to the National Bureau for Vigilance Against Anti-Semitism watchdog.

Years before the attack, Traore called a daughter of his 65-year-old victim, whom he beat savagely before killing, “a dirty Jewess,” the daughter said.

Despite these accounts Traore, who reportedly has no history of mental illness, was placed under psychiatric evaluation as per his temporary insanity claim. Prosecutors presented a draft indictment against him for voluntary manslaughter that contains no mention of the aggravated element of a hate crime.

The omission, along with the perceived indifference of authorities and the media in France to a crime that was largely eclipsed by a dramatic elections campaign, has left many members and leaders of the country’s traumatized Jewish community feeling marginalized and angry at a society they say is reluctant to confront anti-Semitism head-on.

“The authorities’ failure to state the terrorist and anti-Semitic nature of this murder is nothing unusual,” Shmuel Trigano, an author of 24 books and a scholar on anti-Semitism, said in an interview on Radio J three weeks after the killing.

Trigano for years has been accusing French authorities of turning a blind eye to anti-Semitism – including at times when leaders of French Jewry praised their government for taking extraordinary measures to protect Jews, particularly for deploying thousands of armed soldiers around Jewish institutions for their protection following the murder of four Jews at a kosher supermarket in Paris in January 2015.

Yet amid silence by authorities and the national media about the April 4 killing, l’affaire Halimi has emerged as a rallying issue for Jewish leaders, activists and prominent thinkers. They say the investigation is indicative of a deeper problem in French society and the community’s first major test for the administration of the newly elected president, Emmanuel Macron.

“Everything about this crime suggests there is an ongoing denial of reality” by authorities, 17 French intellectuals wrote this month in an open letter published in Le Figaro. “We demand all the truth be brought to light in the murder of Sarah Halimi,” added the authors, including Alain Finkielstein, a Jewish philosopher and member of the Academie Francaise — the guardian of French language and culture.

Amid growing criticism by its constituents CRIF, the umbrella group of French Jewish communities, substituted its calls for patience for authorities’ handling of the investigation with open criticism over its handling and bid to intervene legally.

“A Jewish woman, a physician who ran a kindergarten, was murdered at her home amid cries of ‘Allah hu akbar,” CRIF Vice President Robert Ejnes wrote in a statement titled “An Increasingly Heavy Silence” nearly two months after the incident. The phrase “Allah hu akbar,” which means “God is great” in Arabic, is sometimes linked to terrorist attacks.

The judiciary, Ejnes added, “has not referenced the anti-Semitic character of the murder but it is clear that Ms. Sarah Halimi of blessed memory was killed because she was Jewish by a murderer motivated by Islamism.”

And the media “has practically not spoken about this, as though the defenestration of a woman is not unusual in Paris in 2017!” he wrote, giving voice to one of the aspects of the affair that many French Jews say is among its most painful aspects.

But it was the open letter by the 17 intellectuals on June 4 that broke the silence in the national media about that affair, according to Hervé Gardette, a journalist for the France Culture state radio station. On June 8, Gardette investigated the case in a program titled “Is There a Denial of Anti-Semitism in France?”

Long before the Halimi case, Jewish leaders and thinkers have been complaining for years of a reluctance in society to face inconvenient truths about crimes when their victims happen to be Jewish.

Gardette, who is not Jewish, acknowledged this on his show.

“Strikingly, this murder immediately brings to mind another older murder, of Ilan Halimi in 2006, 24 days after his abduction, and how long it took back then for the anti-Semitic character of the crime to be admitted by the detectives and journalists. So nothing has changed,” he said. “Is there a denial of anti-Semitism in France?”

Ilan Halimi (no relation), a Jewish phone salesman, was abducted, tortured and murdered by a gang led by a career criminal with a history of targeting mostly Jewish victims.

In an open letter addressed to French Interior Minister Gerard Collomb, the French-Jewish philosopher and historian Alexandra Laignel-Lavastine suggested the silence around the Sarah Halimi case stems from the establishment’s desire not to offend Muslims — and to deprive the anti-Muslim far right, led by the leader of the National Front party Marine Le Pen, of campaign fodder.

“Insisting on not calling a spade a spade, minimizing (‘isolated acts’ and ‘lone wolves’), euphemizing (‘children lost to jihad’), justifying, banalizing and playing psychiatrist will get us nowhere,” Laignel-Lavastine wrote.

As for Macron, his official platform speaks of “fighting with determination against all radical streams that distort the values” of Islam, and the distrust of institutions, conspiracy theories and anti-Semitism they represent. But Macron has remained vague on solutions, proposing to conduct the fight by “helping French Muslims to achieve the [restructuring] of their institutions.”

Those who believe that France, despite its previous government’s strong mobilization to protect Jews, has a denial problem cite a long list of cases that they say have been swept under the carpet.

According to Trigano’s research, the French government under former President Jacques Chirac suppressed the anti-Semitic characteristics of at least 500 assaults recorded in the years 2000-02, when anti-Jewish incidents grew from a few dozen annually to hundreds of incidents each year.

More recent cases included the omission of an anti-Semitic motive in a draft indictment against the alleged perpetrators of a 2014 rape and robbery of a Jewish family in the Paris suburb of Creteil. The hate crime element was added following a public outcry.

In 2015, a man who stabbed three Jews near a synagogue in Marseille while crying Allah’s name was initially labeled mentally ill by police, who revised their indictment to omit any reference to mental health following criticism by Jewish leaders.

The question about denial “needs to be asked, and in those terms,” Alain Jakubowicz, president of the International League Against Racism and Anti-Semitism – the French counterpart of the Anti-Defamation League – said during the June 8 radio broadcast. “There is a denial of reality when it comes to this new form of anti-Semitism, which is as deadly as the previous and which poses a problem particularly in France.”

Scholars and watchdogs also worry that anti-Semitic acts are labeled and minimized as “anti-Israel.” The scrapping this year of a documentary about this phenomenon — what some call the “new anti-Semitism” — by the Franco-German Arte television channel “shows the specific treatment of this subject in France, as opposed to other countries,” said Jakubowicz.

Magali Lafourcade, president of the French government’s National Consultative Commission on Human Rights, said she welcomes the debate over whether authorities downplay anti-Semitism and hate crimes. However, referring to the Halimi case during the France Culture broadcast, she said “we need to let the judiciary do its job” and detectives need time to review all aspects of the case.

Jakubowicz rejected Lafourcade’s call to wait for word from the judiciary on the Halimi case.

“The entire reason for this mobilization,” he said in the radio program, “is that the judiciary is not doing its job.”