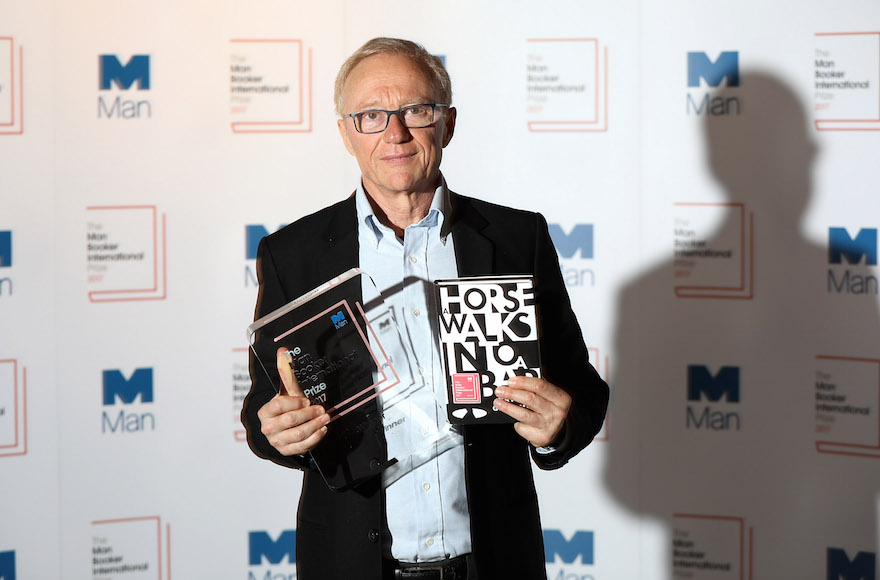 David Grossman posing after being announced as the winner of the Man Booker International Prize 2017 for his book "A Horse Walks into a Bar" at Victoria & Albert Museum in London, June 14, 2017. (Tim P. Whitby/Getty Images)
Advertisement

His novel “A Horse Walks Into a Bar” was announced as the winner Thursday by Nick Barley, chair of the 2017 judging panel, at a dinner at the Victoria & Albert Museum in London.

Grossman, 63, is the author of more than 17 books of fiction and nonfiction, including “See Under: Love” and “To the End of the Land.”  “A Horse Walks Into a Bar,” published in Israel in 2014 and translated into English by Jessica Cohen, is about the day in the life of a failing Israeli stand-up comedian and his memories of past loves, Jerusalem’s Romema neighborhood and his Holocaust survivor parents.

The Man Booker International Prize for fiction has been awarded every two years or so since 2004. Grossman is the first Israeli to win the award. Others shortlisted for the prize this year were Grossman’s fellow Israeli Amos Oz, for “Judas,” and the Argentinian Jewish writer Samanta Schweblin, for “Fever Dream.”

“David Grossman has attempted an ambitious high-wire act of a novel, and he’s pulled it off spectacularly,” said Barley, director of the Edinburgh International Book Festival. “‘A Horse Walks into a Bar’ shines a spotlight on the effects of grief, without any hint of sentimentality. The central character is challenging and flawed, but completely compelling. We were bowled over by Grossman’s willingness to take emotional as well as stylistic risks: Every sentence counts, every word matters in this supreme example of the writer’s craft.’”

This is only the second year that the Man Booker International Prize has been awarded to a single book, with the £50,000 prize ($66,000) divided equally between the author and the translator. Previously it honored a body of work published either originally in English or available in English translation. Philip Roth won the prize in 2011.

The prize is sponsored by Man Group, an investment firm that also sponsors the Man Booker Prize for Fiction.