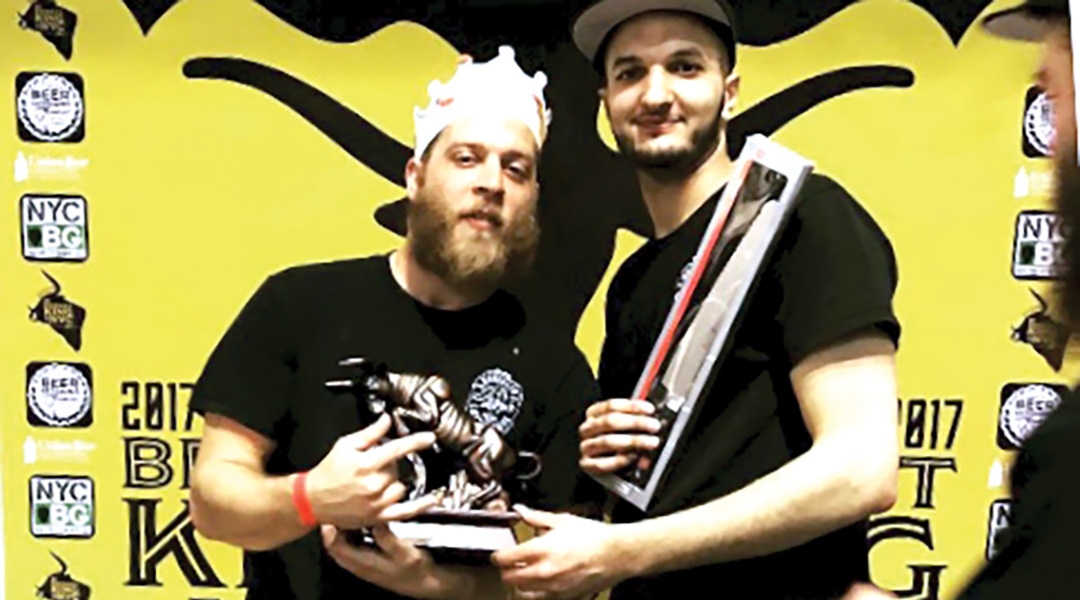 Mohammed “Moe” Sarsour poses with Izzy’s owner Sruli Edelman after winning a cooking contest. “Who woulda thought an Arab and a Jew would make such a good team,” notes the photo’s Instagram caption. (Via briskets_and_blunts on Instagram)
Advertisement

Talk about guilt by association.

Controversial Palestinian-American activist and Women’s March organizer Linda Sarsour generated a wave of press coverage after she was tapped by CUNY as a commencement speaker for one of its graduate schools.

Now, her brother, who works at a popular Crown Heights kosher barbecue joint, is being caught up in her wake.

The Jewish Defense Organization, an extremist group that the Anti-Defamation League said has an agenda “of hate, fear mongering and intimidation,” posted fliers in Crown Heights demanding that the owner of the popular kosher restaurant Izzy’s Brooklyn Smokehouse fire Mohammed Sarsour for, in essence, being Sarsour’s brother.

“Linda Sarsour[,] a hard core Hamas Islamic Nazi terrorist … has a brother pro-Hamas terror [sic] who works at Izzy [sic] Smokehouse. … Let us run him out now before it’s too late!!” the flier said.

Mohammed Sarsour, known by many as Moe, has worked in the neighborhood for more than a decade. Before Izzy’s opened, Sarsour’s father owned a small market, called Linda’s, next door to where Izzy’s is now and where Sarsour has worked since his teens. The supermarket has since been sold and after Izzy’s opened up next door, Moe was hired. He was promoted to a manager position after a few months.

In 2015, Sarsour helped save the life of a man who was stabbed near his father’s store, according to a Facebook post by Linda Sarsour. Although they didn’t mention Sarsour by name, News 12 Brooklyn reported that a “quick-thinking shop worker” at a store at the corner of Troy Avenue and Montgomery Street, the location of Sarsour’s store, tended to the victim’s stomach wound and called 911.

A.J. Weberman, a representative for the JDO, told The Jewish Week that the fliers were produced by “a more extreme part” of its organization but also insisted that they wouldn’t back down from their campaign against Sarsour. “He could be a sleeper agent waiting to be activated by Hamas,” Weberman said, offering no evidence. “It doesn’t make sense for him to work at a glatt kosher restaurant.” Weberman concluded that if Moe Sarsour wanted to work at a kosher restaurant “he should denounce Linda.”

Linda Sarsour is a leader of the BDS (boycott, divestment and sanctions) movement against Israel. Many Jews on the left praise the pro-Palestinian activist for her social justice work. But she is reviled by much of the right for her anti-Israel comments, such as her “Nothing is creepier than Zionism” tweet in 2012 and her 2015 tweet praising a young child walking towards IDF soldiers with a rock in each hand as “the definition of courage.”

Yaacov Behrman, a Crown Heights community activist, told The Jewish Week that he is not a fan of Linda Sarsour, but that “Mohammed, on the other hand, seems to be a good guy. He has deep friendships in the Jewish community, and is well liked. The fact he turned out OK despite Linda actually speaks to his good character.”

Simcha Bard, 26, a Jewish Republican strategist who has known Mohammed for a few years, condemned the flier and said that “Linda Sarsour is problematic, Mohammed isn’t. Quite frankly, anything you might associate with Linda in any way shape or form, shouldn’t define her brother. Linda is fair game, but to attack Mohammed is truly unfair considering his decency and his record of public service, having saved a stabbing victim.” Bard added, “This is the first time I heard of Izzy’s Barbecue and because of this incident I am urging all my friends to support them.”

The owner of Izzy’s, Sruli Edelman, and Mohammed Sarsour declined to comment.