Jared and Ivanka do their own thing as observant Jews. And that’s normal. 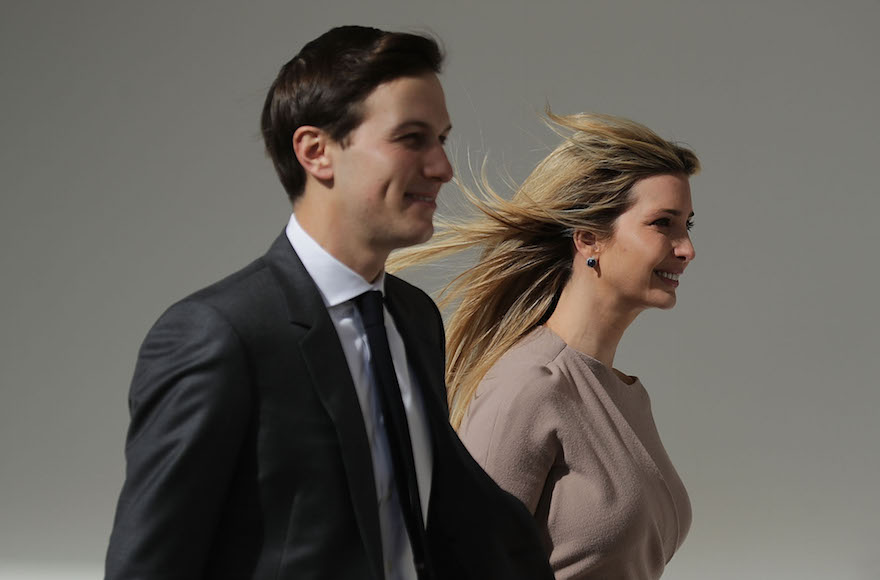 (JTA) — So apparently Jared and Ivanka play golf on Shabbat. Cue the handwringing.

The New York Post reported Wednesday that the president’s Jewish daughter and son-in-law like to hit the links on the holy day, and stay within the bounds of the Sabbath rules by walking the course (instead of driving a cart) and tipping the caddie the next day (instead of handling money). Of course, the newspaper also noted that even according to the “less strict” Conservative movement, merely playing the game is a violation of Shabbat.

Articles of this type — I’ve written a couple — are premised on the idea that if Javanka are Orthodox Jews, they should be observing Jewish law, called halachah, strictly by the book. Anything less is hypocrisy or blasphemy.

On the surface, that assumption seems to make sense. But it’s wrong.

That’s because Jared and Ivanka have never claimed to strictly observe halachah. And among Jews who identify with Orthodoxy and belong to Orthodox synagogues, they are far from alone.

In general, Orthodox Jews tend to structure their lives around obligations and restrictions called mitzvot, from observing the Sabbath and praying three times a day to making sure their clothes don’t include a mix of wool and linen. But a broad spectrum of observance exists among the country’s half-million Orthodox Jews, according to the Pew Research Center’s 2013 “Portrait of Jewish Americans,” the study every American Jewish journalist is statutorily required to cite at least twice a month.

But among self-identified modern Orthodox Jews, the picture is more diverse, says Pew. Nearly a quarter say religion isn’t “very important” in their lives, more than a fifth aren’t certain of their belief in God and 18 percent hardly attend services.

When it comes to Judaism’s legal particulars, nearly a quarter of modern Orthodox Jews don’t light candles on Friday night, 17 percent don’t keep kosher in the home and about a fifth handle money on Shabbat. Alas, the survey did not ask about golfing.

Orthodoxy is theoretically centered around halachic obligation, and today’s modern Orthodoxy is represented by strictly halachic institutions like Yeshiva University and the Orthodox Union. So what to make of these apparently non-Orthodox Orthodox Jews? Actually it’s not all that strange. There are any number of reasons to affiliate with a movement whose rules you occasionally or even often break. Maybe it’s how you grew up. Maybe you appreciate Orthodoxy’s aesthetic of rigor and tradition. Maybe you like the local Orthodox rabbi or synagogue.

Or maybe, when you do observe Jewish customs, you prefer to do so in what feels like a more traditionalist atmosphere – praying a full service in Hebrew with a text mostly unchanged for centuries. There’s a long-running joke in Israel – which isn’t really a joke – that the synagogue secular Israelis don’t go to is Orthodox.

“A lot of people really enjoy the intensity of commitment in the Orthodox community, but they would provide confidentially that they don’t agree with the doctrines or dogmas,” said Rabbi Moshe Grussgott of Congregation Ramath Orah, an Orthodox synagogue in New York City. “They socially find meaning in that community. Every Orthodox rabbi knows such people exist, but there’s an openness. We don’t check to see who believes what.”

Chabad, the sprawling Hasidic outreach movement, has built a global empire on the idea that Orthodox ritual and affiliation can appeal to non-Orthodox Jews. Chabad emissary couples accept that many of those who attend their synagogues are picking and choosing among the mitzvot, perhaps enjoying a Friday night meal and the Saturday morning service before heading off to the golf course or the garden.

Jared and Ivanka undoubtedly adhere more to traditional Jewish customs than most American Jews (Pew says only one in seven Jews avoids handling money on Shabbat; only 25 percent of Jewish parents say they have a child who was enrolled in a yeshiva or Jewish day school in the past year).

But despite the swirling rumors, they’ve – wait for it – never actually claimed to fully observe halachah. Ivanka has discussed her Shabbat observance at length at least twice in the past couple of years, and neither time did she say the family observes Shabbat in the most traditional sense.

In a 2015 Vogue profile, Ivanka said “We’re pretty observant, more than some, less than others.”

Jared added that they both “turn our phones off for 25 hours. Putting aside the religious aspect of it; we live in such a fast-paced world.”

Ivanka repeats this description in her new book, “Women Who Work,” writing that “From sundown Friday to Saturday night, my family and I observe the Shabbat. During this time, we disconnect completely – no emails, no TV, no phone calls, no internet. We enjoy uninterrupted time together and it’s wonderful.”

(A 2016 New Yorker profile of the couple did call them “shomer Shabbos,” a term that denotes full halachic observance, but never quotes them to that effect. Like Jared and Ivanka themselves, the article mentions unplugging and family time.)

Instead, they talk about the thing many observant Jews value about Shabbat: the chance to disconnect from work stress and their numerous devices, and reconnect with family.

Yes, Jared grew up in Orthodox institutions. Yes, the family now attends an Orthodox synagogue. Yes, they play golf on Shabbat, eat at non-kosher restaurants and don’t dress in “Orthodox” garb. And yes, there are many other observant Jews like them — you can find them living in Jewish communities from New York to California to Jerusalem. Frum-shaming people like this doesn’t really make sense when they’ve never actually claimed to be frum.

“Orthodox rabbis have to have that balance,” Grussgott said. “We uphold what halachah and observance should be in the abstract – we don’t compromise on that – but we have to be accepting of everybody.”