Keeping pro-Israel politics bipartisan in an age of polarization 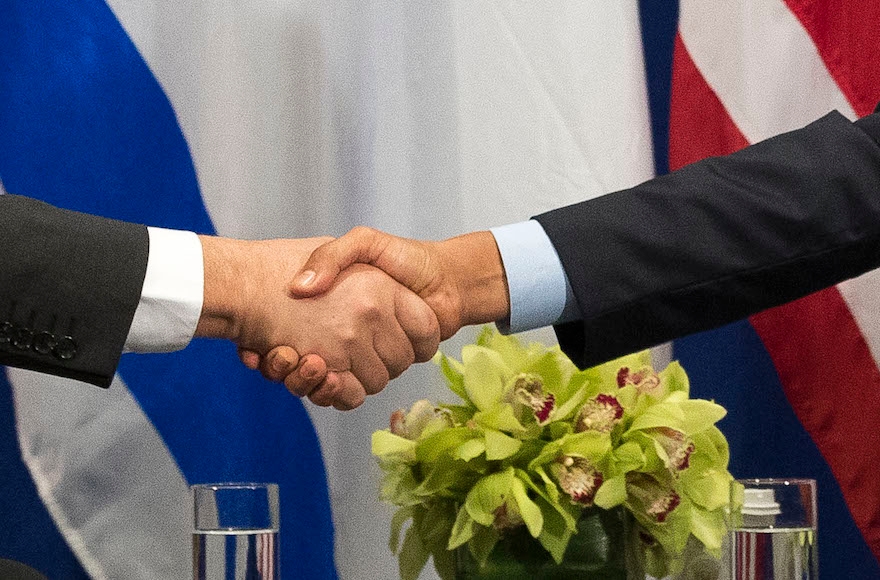 The U.S.-Israel partnership was long based on the idea that both major parties were on the same page. (Drew Angerer/Getty Images)
Advertisement

The tangible friendship expressed for Israel by elected officials at all levels of the U.S. government, the robust cooperation between their business, scientific, defense and intelligence communities, and grassroots American support for the Jewish state endure as the sine qua non of Israel’s success.

None of this would have been possible unless Democrats and Republicans – recognizing the partnership’s inherent value to America – had united in common cause to embrace Israel.

The American Israel Public Affairs Committee has long known this. Reeling from the fallout of its 2016 policy conference, when then-candidate Donald Trump took to the podium to castigate President Barack Obama as “the worst thing that ever happened to Israel,” AIPAC management was determined to prevent this year’s event in March from turning into a partisan battlefield.

But noble aspirations are the first victims in the era of the perpetual political campaign. Addressing the assembly on the first evening, Vice President Mike Pence stoked the coals of divisiveness, proclaiming that “for the first time in a long time, America has a president who will stand with our allies and stand up to our enemies.” He was only echoing the sentiments expressed at that same morning’s opening plenary by Israel’s ambassador to the U.S., Ron Dermer, who said, “For the first time in many years, perhaps even many decades, there is no daylight between our two governments.”

To be sure, Obama clashed with Israeli Prime Minister Benjamin Netanyahu repeatedly, famously blindsiding his government by withholding a U.N. Security Council veto that led to the condemnation of Israel in the twilight of his presidency. But he was still the same president who ultimately signed off on a multi-year, $38 billion Memorandum of Understanding on security assistance — the one that compelled Netanyahu to “thank President Obama and his administration for this historic agreement.”

Here’s the rub: Memories of there never being any “daylight” between even the tightest of allies are myth. Nor has the advent of the Trump era eliminated all points of contention. But Israel has been fortunate to enjoy sustained, exceptionally high levels of coordination and collaboration under U.S. administrations of both political stripes.

And what is it that enables that consistency, which allows Israel to both thrive today and plan for its future?  You guessed it. Bipartisanship.

Skeptics in Israel and within the Republican Party are not wrong: Israel does have a conspicuous problem within the present-day Democratic Party. Its sources range from the raging currents of globalization to differences over Israeli policy vis-à-vis the Palestinians. The incontrovertible fact today is that Republican sympathies for Israel far outstrip Democratic ones, thus posing a challenge from which friends of this bilateral relationship dare not shirk; capitulation is an unaffordable luxury for them.

Because the White House switches hands, congressional majorities are not eternal and even governments in Jerusalem have been rumored to change, neither side of the aisle can be written off. If the Israeli leadership ever had to deal with a hostile and alienated counterpart in the United States, the consequences could be catastrophic.

Ironically, for bipartisanship to be restored to full health, a particular aspect of Israel’s awkward synthesis of identity politics is both relevant and instructive here.

Governance in America is anchored in a two-party system, but Israel’s proportional representation has birthed dozens of parties since its inception; the current Knesset boasts 11 caucuses. Among them are boutique factions championing narrow constituencies, namely religious Jews and Israel’s Arab citizens, but counterintuitively, an independent voice has not always served their needs.

One byproduct has been that these factions are deputized as chief lobbyists for basic services such as religious education and functional neighborhood policing for their communities. In more familiar terms: The fundamental deliverables of liberal democracy have been turned into horse-traded special interests. And if these smaller parties then fail at their polls, whole sectors of society risk being marginalized. Meanwhile, with people voting their parochial concerns, the state becomes almost ungovernable.

A more effective way to guarantee themselves a hearing would have been for these groups to set up shop within Israel’s two major political blocs. That way, their core requisites would become integrated into the platforms of all governments, no matter which way the winds were blowing. In fact, signs of greater consolidation are now underway in Israel with talk of mergers and some newer contenders fielding slates with greater in-house diversity.

Such thinking is a piece of cake for Americans. The Republican and Democratic universes are seeded with multiple affinity groups that toil to ensure their pet causes are well represented in both parties. Among those promoting a strong U.S.-Israel bond, in this context, are the National Jewish Democratic Council and Republican Jewish Coalition, institutions that liaise with their respective party apparatuses and work to foster closer ties between the two nations.

But bipartisan fellowship is becoming ever more tenuous, and I’ve witnessed personally how hyper-politicization can inflict damage to the cause – with supporters of this relationship “colluding” to turn it into a wedge issue when they hammer each other as only fair-weather friends. Since the mission of both the NJDC and the RJC is to help elect members from their own parties, they almost have a vested interest in undermining the bipartisan foundations of U.S.-Israel relations.

This same spirit of polarization has also consumed much of the cohort advocating on behalf of America’s alliance with Israel. AIPAC’s commitment to providing a warm bipartisan home for this community is being assailed by less politically inclusive outfits on both flanks. For the past eight years, J Street’s decidedly pro-Obama bent challenged the kumbaya of pro-Israel orthodoxy. And today, prominent Jewish funders and evangelical groups are calling for a more hard-hitting approach than AIPAC’s, one attuned to the sensibilities of Trump’s America.

How to square this circle when bipartisanship is indispensable but politics is king?

Friends of America’s partnership with Israel might best consider performing triage to stem the bleeding. If the relationship is to recoup its “unifier” status, the most immediate order of business should now be to neutralize the acrimony. AIPAC’s professionalism will remain a formidable asset — but only if the organization is not transformed into a boxing ring where political rivals come to exchange blows without regard for the injury it causes to bipartisanship.

Unless supreme efforts are invested to insulate this neutral ground, it could conceivably implode. Participants in last week’s AIPAC joint trip to Israel for Republican and Democratic campaign operatives’ officials – reportedly it “helped them dial down the bitter partisanship of current-day Washington” – would be the first to vindicate this approach.

At the same time, the current environment has prescribed an increasingly important role for tapered and cohesive silos of the like-minded. Enjoying the cachet of intellectual traction among their natural allies, partisan groups are equally potent messengers on issues ranging from foreign aid to the Iranian nuclear threat that they can cast skillfully in the vernacular of their particular guild. Ideally this task would be performed without too much emphasis on why the opposing team is “weak” on the issue; rather the mutual objective would be for all sides to be “strong.”

Psalm 133 is correct: It is good and pleasant for brothers to dwell together. But to ensure that Democrats and Republicans keep forging ahead to advance the alliance between the United States and Israel – a “best interest” of both countries – parallel inclusive and exclusive tracks of communal activism might just be a sign of the times. Perhaps it’s time for Bipartisanship 2.0.  “Bipairtisanship,” if you will.

(Shalom Lipner [@ShalomLipner] is a nonresident senior fellow of the Center for Middle East Policy at the Brookings Institution. From 1990 to 2016, he served seven consecutive premiers at the Prime Minister’s Office in Jerusalem.)