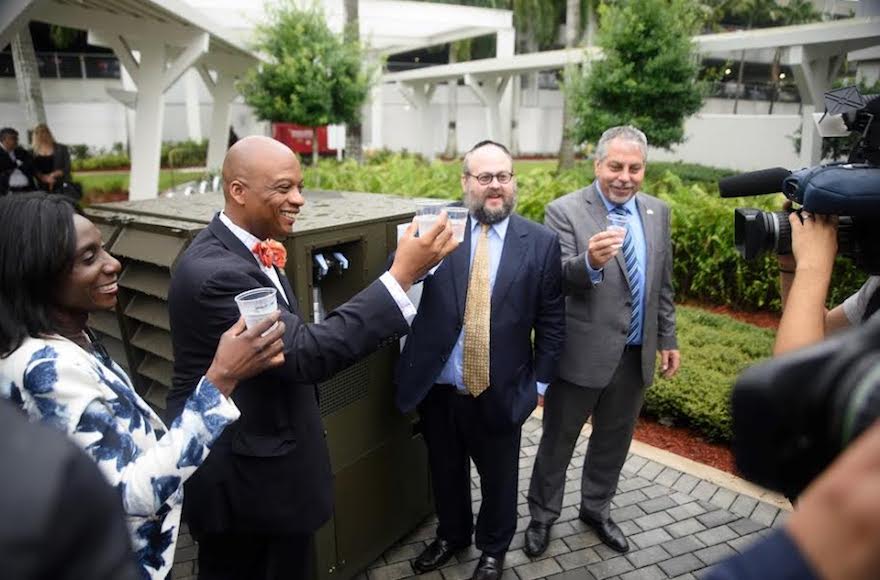 Enter Water-Gen, an Israeli company whose technology captures humidity to extract drinking water from the air.

On Monday, the South Florida city of Miami Gardens announced it was launching a pilot program with the company to address its water problems — the first U.S. city to do so.

“As representatives responsible for the quality of life and safety of our communities, preparedness and readiness to counter crises is mandatory,” Mayor Oliver Gilbert III said at a City Hall news conference. “Water Gen’s pilot will enable us to measure its use for clean drinking water if needed for hurricane relief and any other emergency water situation that may arise.”

Over the next two weeks, Miami Gardens will use a midsized Water-Gen generator to produce drinking water for its residents. Water-Gen officials said they hope the pilot leads to contracts with Miami Gardens and other parts of Florida. The company’s largest generator yields as much as 825 gallons of water per day for only 10 cents a gallon, mostly in energy costs, according to the company.

“Miami Gardens is our first significant pilot program in a U.S. city,” Water-Gen USA President Yehuda Kaploun said Monday. “We are ideally positioned to enable communities to tap into a clean and safe drinking water source with a refreshing taste.”

Florida gets much of its drinking water from the Floridian Aquifer and the Biscayne Aquifer, as well as from surface water from Lake Okeechobee and other lakes, but population increases have strained available sources. Because of the drought, Miami-Dade County, where Miami Gardens in located, has put restrictions on water use, including banning residents from watering outdoors between 10 a.m. and 4 p.m.

In addition, Florida is bracing for hurricanes, which hit the state harder than any other and can cause water contamination. Hurricane season runs from June through November.

“I congratulate Mayor Gilbert and the City of Miami Gardens for its leadership in allowing for the demonstration of water generation technology that could be a game-changer,” he said Monday.

Water-Gen’s ambitions extend beyond Florida and the United States. Earlier this year, the company signed deals, together worth $150 million, to produce drinking water in India and Vietnam, two countries that have long faced shortages. About 1.2 billion people, nearly one-fifth of the world’s population, live in areas of water scarcity, according to the United Nations Department of Economic and Social Affairs.

He touted the technology as a way to counter worldwide water scarcity and the Boycott, Divestment and Sanctions movement against Israel.

“There is no weapon more powerful in the fight against BDS than for Israel to develop technologies that the world cannot live without,” he told the crowd. “You cannot boycott products that you can’t live without.”