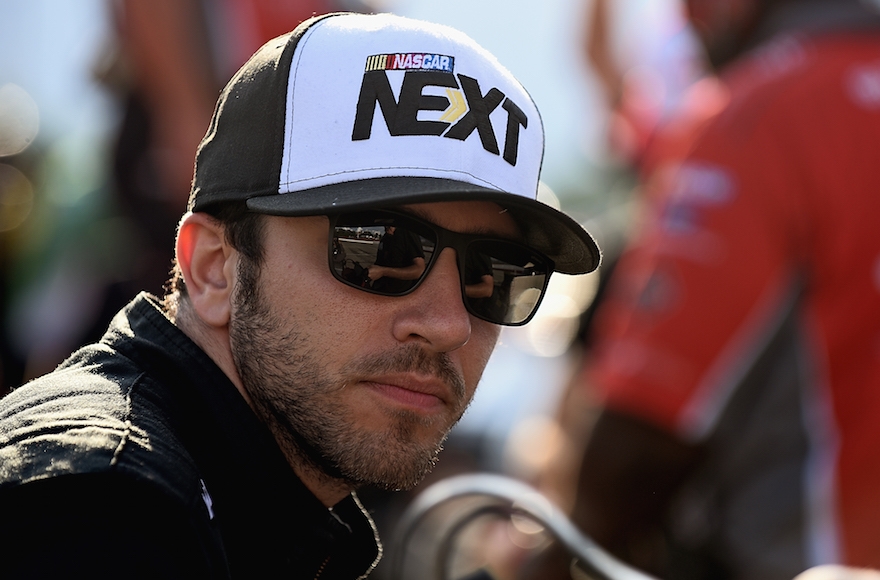 (JTA) — Israeli race car driver Alon Day’s rise to the highest ranks of NASCAR has been an unexpected one for a variety of reasons.

Here’s one of them: The 25-year-old has done the bulk of his training on computer-screen simulators. That’s because Israel didn’t have a motor sport race track until this year.

On Sunday, he became the first Israeli to compete in the Monster Energy NASCAR Cup Series — the sport’s highest league of competition — when he raced the No. 23 car for the BK Racing team at the Sonoma Raceway in Southern California. Though Day finished 32nd among the 38 drivers after being involved in a collision, his participation in the race was still significant.

While NASCAR has made efforts to diversify its pool of athletes, the sport’s fans and drivers remain mostly white and Christian — at times to a controversial extent.

Day, by contrast, wears his Israeli and Jewish identities proudly. His car for Sunday’s race sported a few Israeli flag stickers, and he also had Stars of David on the left arm of his racing suit and on his belt. He has previously driven a car featuring an Anti-Defamation League sticker (even if the ADL was not an official sponsor of the vehicle).

It’s pretty remarkable, given that it is unknown if a Jewish driver has ever made it to the top tier of NASCAR.

Day, speaking to JTA from a taxi following his flight to California on Thursday, is well aware of the unlikeliness of his story — one that involves Israeli go-karts, plenty of computer games and a Florida attorney eager to get a Jewish driver into the NASCAR mainstream.

“I’m going to make history for myself and for my country, Israel,” the Tel Aviv resident said. 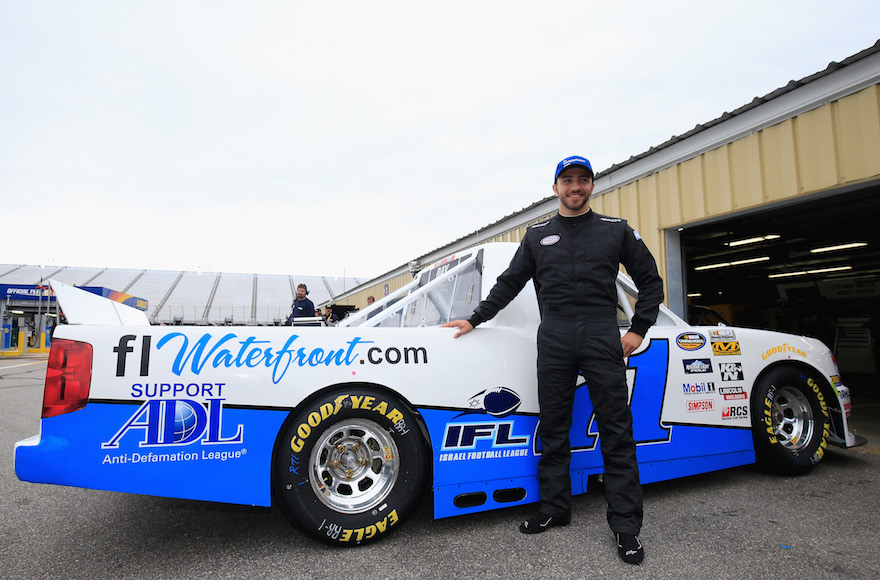 Alon Day at a race in in Loudon, New Hampshire, Sept. 23, 2016, when he had an ADL sticker on his car. (Chris Trotman/NASCAR via Getty Images)

Day grew up in Ashdod, where he learned about NASCAR from playing video games such as Grand Prix Legends. Motor sports have never been popular in Israel, in part because an old British Mandate law (dating to the days when the British ruled Palestine) that banned any cars that could be used for more than commuting was only recently scrapped.

In his early teens, Day became champion of the country’s only semi-professional motor sport league: go-karting. His father, realizing his son’s potential, sent him to compete in Europe. He began racing in Formula Three and was on a trajectory toward Formula One, among the top racing leagues in the world.

But a couple of years ago, Day decided to switch gears (pun intended). He shifted from driving the Formula One open cockpit style of car to stock cars, the ordinary cars that have been modified to be raced in NASCAR.

It was mostly a business decision, because the world of motor racing is driven by sponsorships. Since Israel’s business ties with the U.S. are much stronger than those with Europe, Day recognized he had a greater likelihood of being sponsored to drive for NASCAR.

“It’s definitely much easier for me to get sponsorship here in the states than in Europe,” he said.

Based on his strong start in Europe and the U.S.  — he raced a full season in a sub-league of the Indy 500, the U.S. version of Formula One — Day was selected early last year to be a part of the 2016-17 NASCAR Next program, which highlights young, up-and-coming racers.

That happened to be right around the time that Phil Robertson, the controversial member of the “Duck Dynasty” clan, delivered an eyebrow-raising speech before a NASCAR race in Forth Worth, Texas.

“All right Texas, we got here via Bibles and guns, I’m fixin’ to pray to the one who made that possible,” Robertson said. “I pray Father that we put a Jesus-man in the White House.”

Robertson’s pre-race prayer didn’t sit well with David Levin, a Jewish lawyer from Florida and longtime NASCAR fan. Levin had just waded into the world of NASCAR sponsoring, and the reality star’s rhetoric gave him extra motivation to do something he had long wished for: He would find and help promote a Jewish driver into NASCAR’s top circuit.

Since then, Levin has raised significant sums of money to support Day — he’s even enlisted a former NFL player as a backer. Drivers need sponsors to cover the costs of fuel, a pit crew and its tools, as well as salaries for the driver and his or her manager. In return, sponsors get stickers of their brand logo on their drivers’ car. Over the course of a full season, one sticker can cost over $1 million.

“I don’t really know how he does it, he makes magic,” Day said. “And somehow I’m driving in the car.”

Depending on the results of the Sonoma race — and if Levin can continue to work his “magic” — Day said his goal is to race in the next Cup Series race at Watkins Glen in western New York in August.

Meanwhile, Day is gaining recognition in Israel, where he was named Athlete of the Year in 2016 by the Sports and Culture Ministry. He points to the newly opened race track in Arad and an article about him in Yediot Acharanot, one of Israel’s biggest newspapers, as signs that motor sports are on the rise in the Jewish state.

Day himself is contributing to car racing’s increased visibility in Israel. Alongside his fledgling celebrity, he opened a racing “gym” in Tel Aviv with an old go-karting buddy. The gym houses several driving simulators, which are basically higher-tech versions of arcade games. The building has turned into an all-ages school where Day teaches pupils about racing, as well as about difficult situations a driver encounters on normal roads.

When he’s not abroad racing, Day typically spends three to four hours a day practicing on the race track simulations.

Day says he celebrates Jewish holidays, recites the Kiddush blessing over the wine on Friday nights and is proud to talk about his service in the Israeli army. Although he is an anomaly in the white Christian world of NASCAR, he points out that many stock car racing fans — some of whom are evangelical Christians — are big supporters of Israel, which has helped make him feel comfortable in the United States.

“I think they like seeing someone without that Southern accent, does not have the American flag [on a car] … does not believes in Jesus,” he said. “I’ve gotten tons of media because I’m different.”