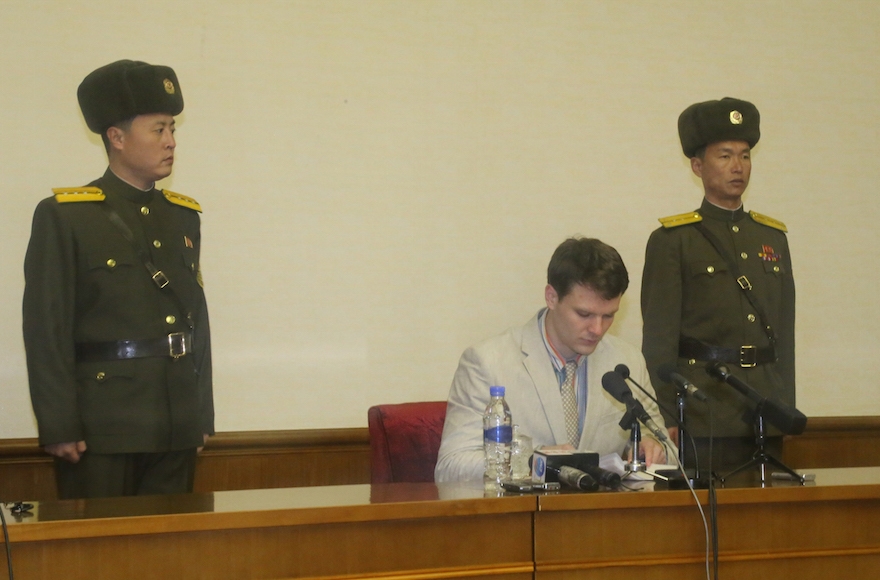 (JTA) — An adjunct professor at the University of Delaware who said that an American Jewish college student who died after being detained for over a year in North Korea “got exactly what he deserved” will not be rehired to teach at the university.

Katherine Dettwyler, who teaches anthropology, criticized Otto Warmbier on social media and in the comments section of an article published on the National Review website after Warmbier died on June 19.

“The University of Delaware has announced that Katherine Dettwyler, who last taught in the spring as an adjunct faculty member, will not be rehired to teach at the University in the future,” the school announced Sunday in a statement, the Delaware News Journal reported.

The announcement came days after the university issued a statement denouncing her remarks.

“Is it wrong of me to think that Otto Warmbier got exactly what he deserved,” Dettwyler said in a post on her Facebook page, according to reports and screenshots of the page, which can no longer be accessed online.

Warmbier was detained in North Korea for over a year and died shortly after returning home in a coma. North Korea has denied that Warmbier was mistreated while in custody after being sentenced to 15 years of hard labor for allegedly stealing a propaganda poster on what North Korea claimed were orders from an Ohio Methodist church.

“These are the same kids who cry about their grades because they didn’t think they’d really have to read and study the material to get a good grade,” wrote Dettwyler. “His parents ultimately are to blame for his growing up thinking he could get away with whatever he wanted. Maybe in the US, where young, white, rich, clueless white males routinely get away with raping women. Not so much in North Korea.”

She also posted that Warmbier behaved like a “spoiled, naive, arrogant U.S. college student who never had to face the consequences of his actions” while he was in North Korea.

The notion that Warmbier deserved his treatment by the North Koreans was floated shortly after his detention in an essay in the HuffPost, which asserted that as a white male Warmbier felt entitled ti misbehave overseas. Salon published a similar essay. Both were widely derided.

Warmbier, whose mother is Jewish, was active at the Hillel at the University of Virginia and visited Israel on Birthright. Throughout negotiations to return Warmbier home, the family did not disclose that he was Jewish so as not to antagonize North Korea, which asserted that he was affiliated with the church.