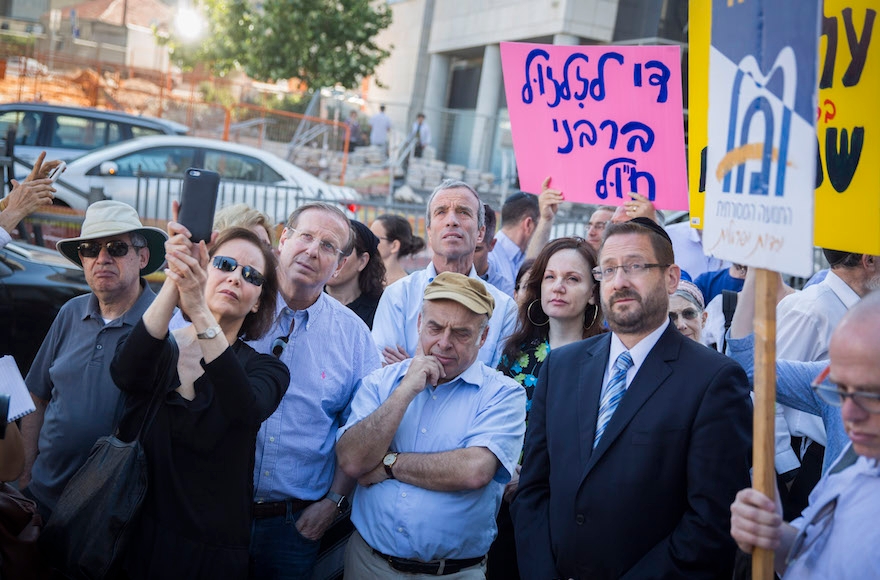 (JTA) — Israeli politicians and Jewish leaders are fighting again over an age-old question: Who counts as a Jew? And who gets to decide?

This week, Israel’s government inflamed simmering tensions over Jewish conversion when a Cabinet committee advanced a bill that would further empower the country’s haredi Orthodox Chief Rabbinate. The measure declares that the rabbinate is the only body authorized by the government to perform conversions in Israel.

Defenders of the bill say it consolidates the conversion system in Israel and safeguards its integrity. But the bill has enraged non-Orthodox Israelis and American Jews who see it as a betrayal of Jewish pluralism.

While the bill does not apply to conversions performed outside of Israel, Jewish leaders fear it will impugn the validity of Reform and Conservative Judaism worldwide.

Here’s what you need to know about the controversial legislation.

The bill gives the Chief Rabbinate authority over all official conversions in Israel.

The aim of the bill is to “establish that conversion performed in Israel will be recognized by law only if it is done through the state conversion system,” which is run by the Chief Rabbinate.

In other words, for those who convert to Judaism in Israel, the state will recognize them as Jewish only if they convert through the rabbinate. Any other Jewish conversion performed within Israel, even under private Orthodox auspices, would not be valid in the eyes of the state. But the bill clarifies that private conversions of any denomination would not be outlawed — just unrecognized.

The rabbinate already determines who is Jewish for the purposes of marriage and divorce within Israel. Under the bill, if a non-Jewish resident of Israel wanted to convert to Judaism and gain citizenship under the Law of Return, the rabbinate would also control that process.

The goal is to consolidate Israel’s conversion system under an authority that everyone considers valid.

“Conversion in Israel will be a state-run, uniform conversion, according to Torah law, that will be recognized by all of the Jewish people,” the bill states.

The bill would prevent Israel from recognizing non-Orthodox conversions.

Until last year, the rabbinate controlled all official conversion in Israel. But in March 2016, the Israeli Supreme Court ruled that the state must recognize conversions performed by private Orthodox courts outside the rabbinate’s purview.

Religious pluralism advocates celebrated the ruling as a victory because it broke the monopoly of the Chief Rabbinate. Liberal Jewish leaders argued that the next step would be for the court to force recognition of private non-Orthodox conversions in Israel, and a petition before the court asks it to do just that.

The proposed legislation would turn back the clock 15 months, taking away recognition from the private Orthodox courts, and also block any possibility of the state recognizing non-Orthodox conversions performed within Israel.

“They understand that the Supreme Court will grant us what we justly deserve,” said Yizhar Hess, CEO of the Israeli Conservative movement. “This law aims to block the Supreme Court. This strengthens the haredi Chief Rabbinate and will anchor it in a way it isn’t anchored today.”

Some government officials have said the bill would prevent African asylum seekers in Israel from getting a Reform conversion and subsequently obtaining citizenship. But there is no discernible movement among asylum seekers to pursue Jewish conversion.

The bill would not affect conversions performed outside of Israel …

So even if the bill passes, Diaspora Jews who converted through the Reform and Conservative movements can still gain automatic Israeli citizenship under the Law of Return.

… but Jewish leaders are still raising hell over it.

If American Jewish leaders are angry about the crisis over the Western Wall, they are apoplectic about this bill. They acknowledge that it does not affect Diaspora conversions. But Jerry Silverman, CEO of the Jewish Federations of North America, warned of a domino effect that could lead the rabbinate one day to extend its reach across the ocean.

“The biggest challenge for the North American Jewish community is codifying the rabbinate as the sole owners of conversion in Israel,” Silverman told JTA on Wednesday. “We think that it will be a domino effect, and it opens the door to give them more decision capability well beyond Israel.”

Silverman has spent the past few days lobbying Knesset members against the bill, and some local American Jewish leaders have made threats in the wake of Sunday’s committee vote. Steven Nasatir, president of Chicago’s federation, told The Times of Israel that any lawmaker who votes for the bill “will not be welcome in our community.”

“This would set back the current reality and make all matters of conversion subject to the furthest right of the ultra-Orthodox world,” Rabbi Rick Jacobs, president of the Union for Reform Judaism, told JTA. “It would begin the slow erosion of the Law of Return and affect the validity of conversion throughout the Jewish world.”

This is the latest battle in a decades-long war.

American Jews and haredi Orthodox Israeli politicians have been fighting over this issue for at least three decades; this is just the latest round.

In 1987, a Reform Jewish convert sought citizenship under the Law of Return, and the Israeli Supreme Court allowed it despite haredi protest. Ten years later, a government commission was appointed to come up with a solution to the conversion debate, which had been exacerbated by the mass arrival of Soviet immigrants who had Jewish ancestry but were not necessarily Jewish. The commission recommended a pluralist conversion school that would lead to an actual conversion ceremony performed by the rabbinate.

In 2010, a bill was introduced that would allow a range of local Orthodox rabbis in Israel to perform conversions, but would make the rabbinate the sole authority over all conversions performed in Israel. Amid a massive outcry from Diaspora Jewish leaders, the bill was shelved.

In 2014, the government voted in a Cabinet decision to let those local Orthodox rabbis perform state-recognized conversions — but not under the authority of the rabbinate. After joining the governing coalition the following year, haredi parties succeeded in getting the decision repealed.

Then, a year later, the Supreme Court issued its ruling on private Orthodox conversions. And here we are.

Israel’s chief rabbis embrace friendlier approach to marriage, but is it enough?