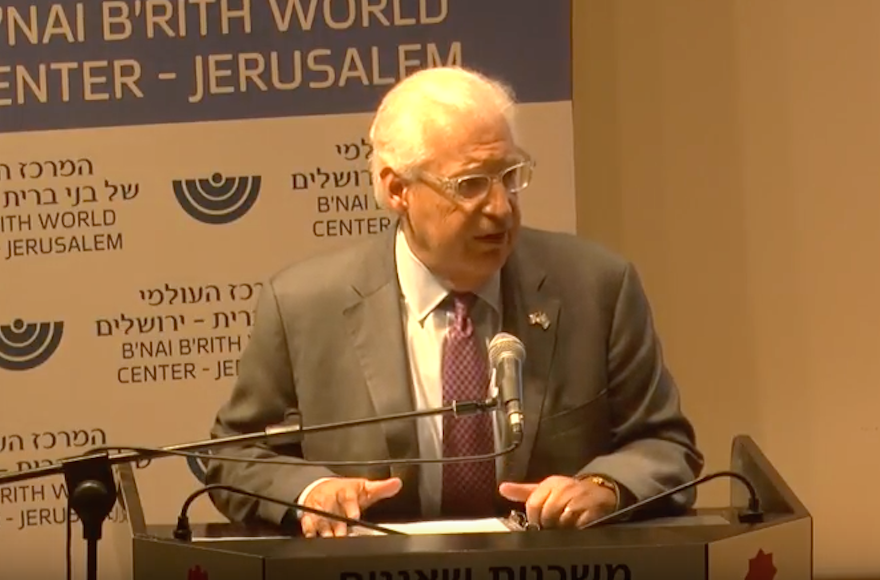 Friedman also called out an unnamed Jewish organization for threatening to withdraw its support for Israel in the wake of the Israeli government’s decision on Sunday to freeze a compromise on egalitarian prayer at the Western Wall.

“It’s not enough to unite behind common enemies. We should unite behind the miracle of the State of Israel,” Friedman said Tuesday night at a B’nai B’rith event in Jerusalem honoring journalists. He also said that Jewish unity “is a question of mutual respect and coexistence. And as soon as someone wants to win, everybody is going to lose.”

In an unusual move, Friedman said he was speaking as an individual Jew, not a diplomat.

“I want to speak to you to some extent not as the United States ambassador to Israel, but as a member of the Jewish faith and as the son of a rabbi who practiced before his pulpit for at least 45 years and committed his life to Jewish unity,” Friedman said.

He also admitted that “I am as guilty as anyone else for having entered the partisan divide that has, unfortunately, to some extent fractured the Jewish community in the U.S. and in Israel. But it has to end.”

In his speech, Friedman said he would “treat the Jewish people of whatever stripe, whatever political views, with the same dignity and respect that they all deserve. And I hope we all do the same. We must turn the page.”

Several Jewish organizations, including the Union for Reform Judaism and the Jewish Agency, warned this week that the freezing of the Western Wall compromise, announced 16 months ago but never implemented, threatened to erode relations between Diaspora Jews and the Israeli government.

Friedman declined to discuss the Middle East peace efforts being undertaken by Trump.

“There’s an expression in English: ‘Those who talk don’t know, and those who know don’t talk.’ And so, here I actually know, so I’m not going to talk,” he said, adding, “I don’t see any real purpose in jumping the gun on some sensitive discussions.”

Friedman reportedly has been scheduled to speak about the deep, abiding relationship between Israel and the United States, but changed his focus in the wake of  the Western Wall controversy and a controversial Knesset bill that would give the haredi Orthodox Chief Rabbinate a monopoly on conversions in Israel.