Al Franken learned about justice from his childhood rabbi 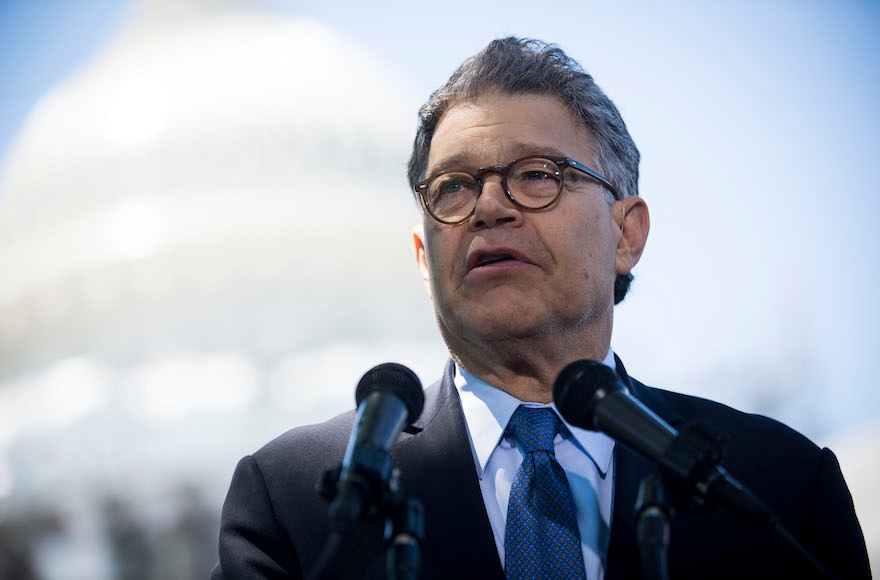 (JTA) — In February 2015, Sen. Jim Inhofe carried a snowball to the floor of the Senate to prove global warming did not exist.Everyone knows “it is very, very cold outside,” the Oklahoma Republican said. “Unseasonable.”

That, said Al Franken, gave him an idea.

“I thought about coming into the chamber with a snowball and just packing it very tight the way we do in Minnesota and throwing it towards Inhofe’s desk,” said Franken, the former comedian and “Saturday Night Live” writer told JTA. “I’d ask him to pre-tape [a scene with] his glasses askew. I was thinking of actually taping it for a laugh.”

But that’s when the senator in Al Franken took over — the Al Franken who learned to suppress his gag reflex when he was first elected to the Senate in 2008. Instead of being the life of the (Democratic) party, he became a respected policy wonk whose thoughtful and intelligent questioning of folks ranging from Jeff Sessions to Rick Perry went viral and elevated him in the minds of some to a potential 2020 presidential candidate.

“No,” he told me, “I’m not gonna do that. I’m not going to run for president. I think whoever is president should really want the job. It’s a very hard job and you have to have a real fire in the belly in order to do it.”

It’s not the first time Franken, 66, has denied presidential ambitions and it probably won’t be the last. Of course, he was an unlikely senator, too.

He tells the story of his metamorphosis from the halls of “SNL” to the halls of Congress in his latest book, “Al Franken: Giant of the Senate.” It’s a serious book leavened by humor — a sort of literary dramedy.

Franken grew up in St. Louis Park, a Minneapolis suburb that also was home to Joel and Ethan Coen — they set their film “A Serious Man” there — and New York Times columnist Thomas Friedman. It was about 25 percent Jewish, which in Minnesota “is the equivalent of a Jewish shtetl,” Franken said. 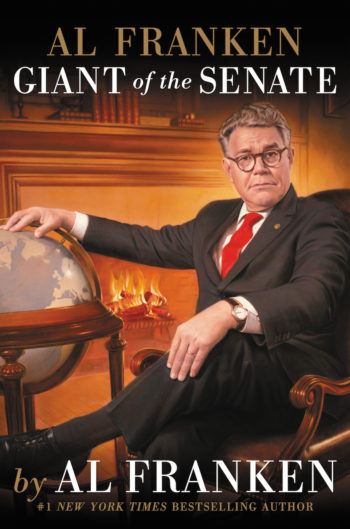 The cover of “Al Franken: Giant of the Senate” (Twelve Books)

He and his family were members of Temple Israel, a large Reform synagogue. Franken said his father, Joe, “mainly loved the temple for the music and the social aspects. He was an usher. I was not a bar mitzvah, but I was confirmed.”

Politically, Joe Franken “was a Jacob Javits Republican,” recalling the liberal GOP senator from New York who served from 1957 to 1981.

Franken said his father changed his affiliation to Democrat in 1964 because the Republican presidential nominee, Barry Goldwater, voted against the Civil Rights Act.

“We used to watch TV in our TV room or in our den while we ate dinner on tray tables. Huntley-Brinkley. Or Cronkite,” Franken recalled. “We’d watch the civil rights demonstrations and see sheriffs pointing fire hoses and setting dogs on demonstrators. My father would say that no Jew could be for that. We knew exactly what he meant.”

According to his campaign biography, Franken and his older brother, Owen, were raised in a two-bedroom, one-bath house.

“We had the Holocaust pounded into our heads,” he said. “That was our first lesson in justice. Our rabbi, Rabbi [Max] Shapiro, would say, ‘It’s not enough to be for justice. You have to do justice.’ I think he was quoting Hillel.”

Neither of Franken’s parents attended college, so they placed extraordinary emphasis on education for their kids.

“When the Russians put Sputnik up and terrified Americans because the Soviets were ahead of us and had nuclear weapons, my parents marched us into the living room and said ‘you boys are going to study math and science so we can beat the Russians,’” he recalled.

Franken made it to Harvard, but ultimately chose comedy over battling the Russkies. He and his writing partner, Tom Davis, worked small comedy clubs before they were hired in 1975 by Lorne Michaels as apprentice writers for the first season of “Saturday Night Live.”

At some point it became clear that Franken was the heir apparent to Michaels. But toward the end of the 1979-80 season, Franken performed a Weekend Update commentary, “A Limo for A Lame-O,” mocking the programming choices of the NBC president, Fred Silverman. According to several histories of the show’s early days, Silverman was not a fan, and soon thereafter denied Michaels’ request to have Franken replace him as producer. Franken and Davis left in a housecleaning by Michaels’ ill-fated successor, Jean Doumanian.

Franken returned to the show in 1985 but quit again 10 years later when Norm MacDonald was tapped as the Weekend Update anchor — a seat Franken wanted.

There followed some film work and a series of best-selling books of political humor — including “Lies and the Lying Liars Who Tell Them: A Fair and Balanced Look at the Right” and “Rush Limbaugh Is a Big Fat Idiot: And Other Observations” — and a three-year stint as an afternoon commentator in Air America, a liberal-leaning radio network he helped found.

Franken can’t say exactly when he decided to transition from political commentary to actually running for office — or to do justice, as his rabbi said. But it was precipitated by the death of his mentor, Sen. Paul Wellstone, in a 2002 plane crash while the Minnesota Democrat was campaigning to retain his seat. Franken was angry, too, when Wellstone’s successor, Norm Coleman, described himself only three months into his first term as a “99 percent” improvement over the late Jewish lawmaker.

It took awhile for Franken to re-establish residency in Minnesota and form a political action committee, but in 2007, he threw his hat in the ring against Coleman. (Noting that the three preceding senatorial races featured Jews on both sides — Rudy Boschwitz vs. Wellstone twice, then Wellstone vs. Coleman, Franken quipped, “I don’t think Minnesota is ready for a gentile in this seat.”)

Not everyone was pleased by his candidacy. The Democratic Senatorial Campaign Committee, for one, was so sure he’d lose it withheld its support.

Not that the Republicans were taking any chances. They started what Franken calls a de-humorizing campaign, treating a joke from the Rush Limbaugh book as fact. Franken had “suggested” that terminally ill elderly people be put in rockets and shot across the Snake River, with pay-per-view revenues going to reduce the debt.

“I was getting slammed all over the place,” Franken told me.  “They [the Republicans] were putting my jokes in the de-humorizer and attacking me for what I did in comedy.”

What turned things around? He claims it was his wife of 40-plus years, Franni.

“She’d had enough of it,” Franken said, and appeared in a 60-second commercial in which she talked about her own battle with alcoholism, how her husband had stood by her “through thick and thin,” and how she was certain “he’ll always come through for Minnesota.”

“A couple of days later we had a debate in a gym, and when Franni entered the room she got a standing ovation.”

Still, it was hardly a landslide victory — Franken won by just 312 votes out of 2.9 million cast. He survived multiple recounts and lawsuits before finally being officially recognized as the winner at the end of June, more than seven months after the election.

He immediately set to work to essentially “de-humorize” himself by coming prepared to all committee and subcommittee meetings.

“What surprised me most was how little debate there is,” Franken said. “A lot of legislation gets worked out in offices or conference rooms. Most speeches you give there’s no one out there. I think that’s most surprising if you think of this as one of the great deliberative bodies in the world.”

He also was taken back by the toxicity in the Congress, as exemplified by the stated goal of Senate Majority Leader Mitch McConnell: that his “No. 1 priority [was] to see that Obama was a one-term president.”

“I remember asking colleagues who’d been there a long time if it was as bad as this 20 years ago, 30 years ago. They said no. When I asked if it had ever been this bad, they said, yes, you know when that [guy] got hit by a cane.”

In 1856, Sen. Charles Sumner, a Massachusetts Republican, was beaten by a member of the House of Representatives after giving a lengthy anti-slavery speech.

Still, Franken has done his best to work with everyone — except Ted Cruz, who the Minnesotan said “makes no effort to be collegial.”

“He’s a toxic co-worker, and if you think of the Senate as a workplace with a 100 people, it’s kind of a good idea to get along with others. He doesn’t.  He’s the guy who cooks fish in the office microwave.”

Franken won re-election in 2014 by a 53-42 percent margin. Keeping his seat, he’s now in a position to really fight the Russians — or at least their election meddling — just like dad wanted all along.