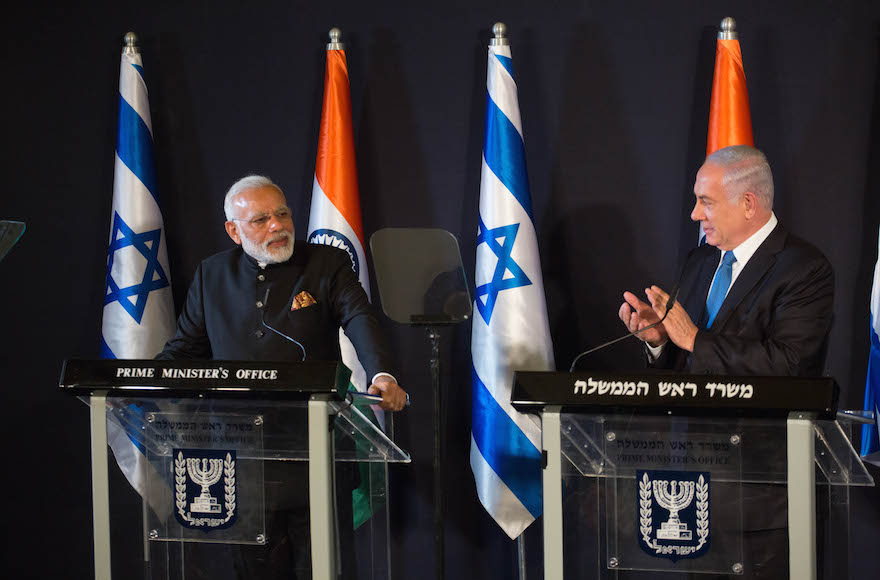 Modi arrived in Israel on Tuesday afternoon, the first visit to Israel by an Indian head of government. The visit comes 25 years after the establishment of diplomatic ties between the two countries.

Modi visited Israel in 2008 for the first time when he served as chief minister of the Indian state of Gujarat.

“My visit celebrates the strength of centuries-old links between our societies,” Modi said during a welcoming ceremony at Ben Gurion International Airport.   He said he would work to build “a strong and resilient partnership with Israel.”

Netanyahu said in his remarks: “Prime Minister, we’ve been waiting for you a long time. We’ve been waiting almost 70 years in fact because yours is truly a historic visit. It’s the first time an Indian Prime Minister is visiting Israel. We receive you with open arms. We love India. We admire your culture, we admire your history, your democracy, your commitment to progress. We view you as kindred spirits in our common quest to provide a better future for our peoples and for our world.”

“The ties between our talented innovative peoples is natural. It’s so natural that we could ask what took so long for them to blossom? Well, it took a meeting of minds and hearts, it took a commitment of our governments. We have that today,” he also said.

Netanyahu announced that the two leaders would sign an agreement for a $40 million innovation fund. The visit is expected to boost economic and defense ties between the two countries.

Among Modi’s first stops on Tuesday was the Yad Vashem Holocaust memorial and museum.  He is not scheduled to visit the Palestinian Authority or meet with Palestinian officials during his visit, despite his country having good relations with the Arab world. Netanyahu reportedly will accompany Modi for much of his three-day visit, an unusual step.

During his visit, Modi will meet with members of the Indian community living in Israel, visit a Haifa cemetery where Indian soldiers are buries, and meet with Moshe Holtzberg, whose parents were murdered in an attack on the Mumbai Chabad House, as well as his Indian nanny who accompanied him to Israel.