Patti LuPone isn’t a Jew, but she often plays one on stage and screen 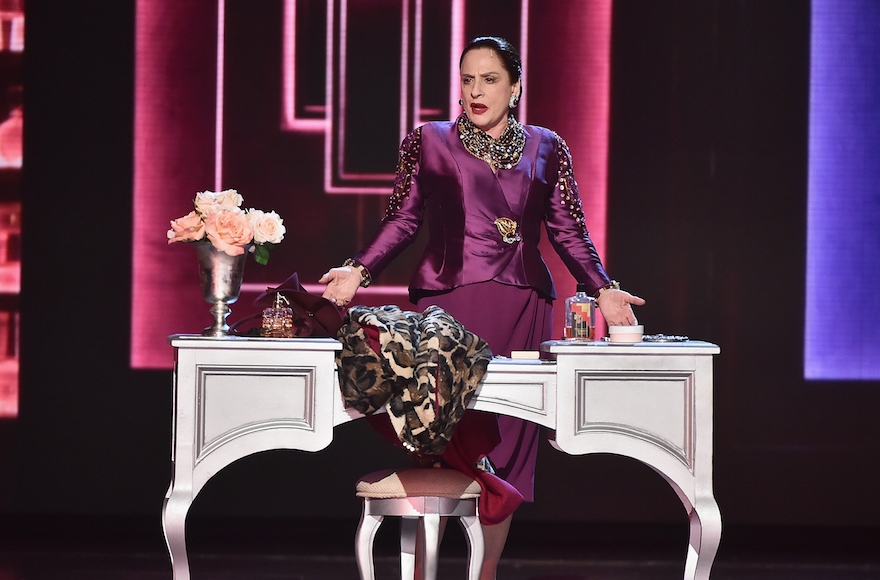 (JTA) — Patti LuPone recently discovered that she has something in common with Helena Rubinstein, the makeup mogul and Polish Jewish immigrant she is currently portraying in the Broadway musical “War Paint.”

Using the genealogy website 23andMe, she found out that she is 87 percent southern Italian and 12 percent Eastern European and North African.

That means she may have some of the Jewish roots casting directors have seen in her all along.

Rubinstein is the latest in LuPone’s string of iconic roles on Broadway, including Eva Peron in “Evita,” Mama Rose in “Gypsy,” and Mrs. Lovett in the 2005 revival of “Sweeney Todd.”

“They’re all quite different and they’re all really great female parts,” she says.

In addition to Rubinstein, LuPone played a rabbi in the CW series “Crazy Ex-Girlfriend,” the Jewish sister-in-law of Robert De Niro’s title character in “The Comedian” (2016) and the social-climbing Atlanta Jewish daughter-in-law Florine in “Driving Miss Daisy” (1989).

She considers herself lucky to find significant female stage roles of any ethnicity at this stage in her career.

“This will probably be my last musical because I’ll never be a leading lady again. I’ll never have a part like this again,” LuPone says of “War Paint.”

Going forward, she hopes to do more television and comedy.

LuPone spoke to JTA about the similarities between Jews and Italians, playing an immigrant in 2017, and more.

JTA: Is there a reason you think you are frequently cast in Jewish roles?

Do you think they’re pretty similar?

They must be. A lot of people say, “What’s the difference between Jews and Italians?” and I say, “I don’t know.” I look very ethnic. And I think because I look ethnic and because I have a prominent nose — not that that’s necessarily a feature of anything, but it’s certainly Italian and I suppose it could be Jewish — I’m cast in ethnic parts more often than not. I’m not your all American. That’s to my advantage, quite frankly. I get to play more interesting roles.

In order to play Helena Rubinstein, did you do any research into the Jewish immigrant experience?

I didn’t do it necessarily about the Jewish immigrant, but about her, Helena Rubinstein. Her trajectory in life was quite different than a Jewish immigrant experience. She was fiercely independent and rejected her father’s choice for marriage, so he threw her out of the house, and she was shuttled between Vienna and finally landed in Australia, and that’s where she began her business. Because she was an organically strong woman, she survived potential sexual abuse from an uncle.

When she came to the States, she was already established. What she did do is pretty much save her family. She got her family out of Poland before the war. One of her sisters died in a concentration camp, Regina. And the irony here is that Helena Rubinstein was sold to L’Oreal and L’Oreal has Nazi affiliations. [In 1991, the chairman of L’Oreal’s Helena Rubinstein unit resigned after French papers reported his 1948 conviction for wartime crimes.]

Beauty is an ugly business. So her experience I think is different than a typical immigrant story to America or to South America. She encountered prejudice. In the books that I’ve read, it doesn’t necessarily talk about any prejudice that she received in Australia or London, but she encountered prejudice in America. She was also an incredibly shrewd woman. She was very, very smart.

I think she’s a very colorful character. [Librettist] Doug Wright wrote a wonderful part. It’s just wonderful to be able to have humor in a character. It relieves the audience if they can laugh and I have a lot of laugh lines. And there are two direct quotes: “There are no ugly women, only lazy ones,” and “I’m extravagant in my anger as I am in all things.” Those are things that Helena said. I like the fact that she’s humorous and I like the fact that there’s great variety in the character. There’s conflict. There’s humor. There’s vulnerability.

This season on Broadway has felt particularly Jewish with “War Paint,” “Oslo,” “Indecent,” “Falsettos.” Have you noticed that?

You also recently played a rabbi on “Crazy Ex-Girlfriend.” I read that you had asked to be on that show. What do you love about it so much?

First of all, it’s extremely funny. And Rachel [Bloom], as far as I’m concerned, is the only person that is working in film that knows how to do a musical number. It’s spontaneous. It makes sense. When you think about musicals, it’s just heightened talk. When people are talking and then they break into song, it really should be an extension of talk. And she knows how to do that. Her film crew knows how to shoot it so that you’re seeing the entire picture, not just a close-up, not just from the neck up, not just from the chest up, you’re seeing the legs. In a musical, you want to see the legs. And it’s laugh-out-loud funny.

And the musical number that you did, “Remember That We Suffered,” was one of the best of the season. What was it like to film that?

It was hysterical. It’s difficult. You do it over and over and over again and you do it all day. But because of who she is and who she surrounds herself with — the people that are in the fold of that show — it is dedicated, but it is lighthearted, so there was a lot of laughter. A lot of laughter and a lot of fun.

Have you ever spoken to Mandy Patinkin, your “Evita” co-star,  about his Jewish heritage?

I’ve never talked to him about it. Actually, I think I have, but I’m old. I can’t remember anything anymore. I think if he weren’t an actor, he would have been a cantor. At least that’s what his voice sounds like. And he’s a very compassionate, passionate committed human being, and I just adore him. I adore every bit of Mandy Patinkin.

Playing an immigrant right now, though as you said, it’s not necessarily the typical immigrant experience, does it feel particularly timely?

Oh yeah. And believe me, don’t I hit the word “immigrant” when I say it in the show. I’m devastated at what’s happening in this county. I’m confused. I’m depressed. I’m scared. I think we’re heading in the wrong direction with this horrible human being for our president and sometimes I feel absolutely ridiculous prancing around the stage when I feel I should be doing more in protest. Nobody is looking into the souls of these people. We’re shutting out potential doctors who could cure cancer. We are shutting out nuclear physicists. We are shutting out great artists and novelists. I can’t go there. I’ll just burst into tears.

Does it help at all to be doing this show?

Well, yes, because I think there’s a lot that we’re saying about women. And when was the last time you thought two leading ladies on the stage? But my social conscious is I don’t feel like I’m doing enough in protest of what’s happening in our country.