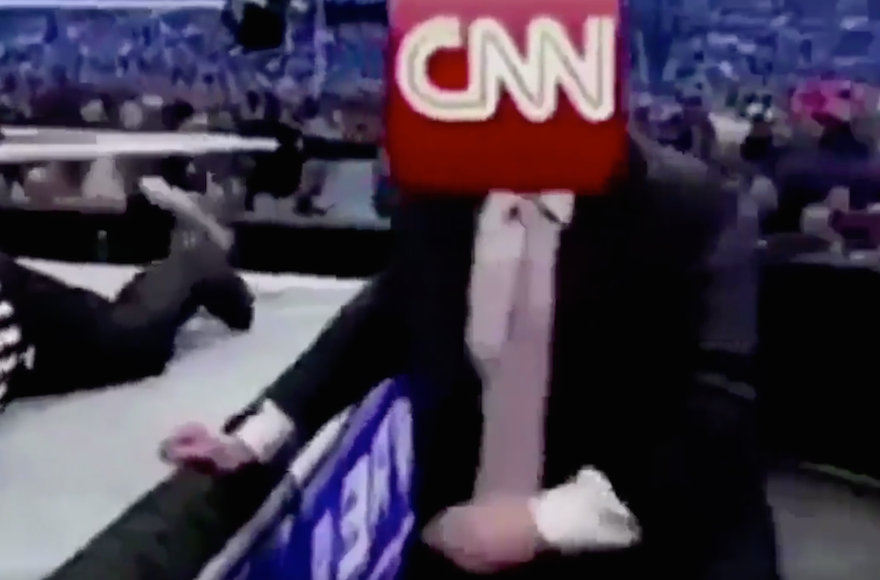 (JTA) — The Reddit user who claimed responsibility for the altered video depicting President Donald Trump body slamming someone with CNN superimposed over his head has apologized.

The user, who goes by the handle “HanAssholeSolo,” also apologized for other offensive content he posted, which included anti-Semitic and racist imagery, CNN reported Tuesday evening. He has removed that content from his Reddit account, according to CNN.

CNN’s KFIle reported that it discovered the identity of the man, a private citizen, by using identifying information in his Reddit account and investigating the biographical data garnered from it. Shortly after CNN first attempted to contact him by phone and email, the man posted his apology on Reddit and then called CNN, which said Tuesday evening that it decided not to reveal his name because he said he feared for his personal safety and the damage it would do to his reputation and that of his family.

CNN noted that it “reserves the right to publish his identity” should he again post offensive material.

“First of all, I would like to apologize to the members of the reddit community for getting this site and this sub embroiled in a controversy that should never have happened,” he wrote in his apology on Reddit, according to CNN. “I would also like to apologize for the posts made that were racist, bigoted, and anti-semitic. I am in no way this kind of person, I love and accept people of all walks of life and have done so for my entire life. I am not the person that the media portrays me to be in real life, I was trolling and posting things to get a reaction from the subs on reddit and never meant any of the hateful things I said in those posts. I would never support any kind of violence or actions against others simply for what they believe in, their religion, or the lifestyle they choose to have. Nor would I carry out any violence against anyone based upon that or support anyone who did.”

The apology has since been removed by the moderators of /The_Donald subreddit.

“The meme was created purely as satire, it was not meant to be a call to violence against CNN or any other news affiliation,” he also wrote. “I had no idea anyone would take it and put sound to it and then have it put up on the President’s Twitter feed. It was a prank, nothing more.”

Trump tweeted the gif, or graphics interchange format — a short video that is friendly to multiple platforms — on Sunday. It was drawn from a staged encounter years ago between wrestling impresario Vince McMahon and Trump, who are friends.

The president has feuded with the media generally and CNN specifically in recent days. He has seized on CNN’s retracting of a report linking a Trump ally to a Senate investigation, calling the news network a purveyor of “garbage journalism.” He tagged the gif #FraudNewsCNN, and the official White House account, @POTUS, retweeted it.