After UNESCO vote, Netanyahu reads from Bible to prove Jewish ties to Hebron 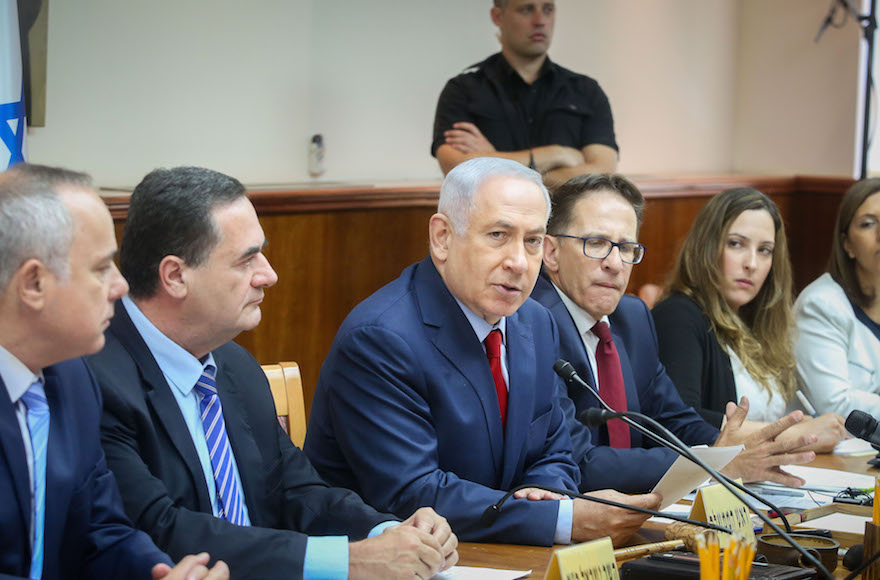 JERUSALEM (JTA) — Israeli Prime Minister Benjamin Netanyahu put a kippah on his head and read from the Bible during the weekly Cabinet meeting to illustrate the Jewish people’s and Israel’s connection to Hebron.

Sunday’s display came after the UNESCO World Heritage Committee on Friday acting on a request from the Palestinians, declared Hebron’s Old City to be a heritage site in danger.

“I would like to read from Genesis 23:16-19,” Netanyahu said in opening up the meeting. “And Abraham hearkened unto Ephron; and Abraham weighed to Ephron the silver, which he had named in the hearing of the children of Heth, four hundred shekels of silver, current money with the merchant. … And after this, Abraham buried Sarah his wife in the cave of the field of Machpelah before Mamre — the same is Hebron — in the land of Canaan. And the field, and the cave that is therein, were made sure unto Abraham for a possession of a burying-place by the children of Heth,” Netanyahu said.

“The connection between the Jewish people and Hebron and the Tomb of the Patriarchs is one of purchase and of history which may be without parallel in the history of peoples. Of course this did not prevent the UNESCO World Heritage Committee last Friday from passing yet another delusional resolution which determined that the Tomb of the Patriarchs, the same Cave of Machpelah, is a Palestinian heritage site.”

In fact, the resolution applied more broadly to Hebron’s Old City and did not describe it as “Palestinian,” though it did note that the resolution was submitted by Palestine. An outside report that the committee cited in the resolution noted the Old City’s importance to Jews, Muslims and Christians.

Netanyahu reiterated an announcement first made Friday that Israel would cut an additional $1 million from Israel’s United Nations membership dues and transfer the funds to the establishment of The Museum of the Heritage of the Jewish People in Kiryat Arba and Hebron. The money also will be used for additional heritage initiatives related to Hebron, he said.

Israel announced in May that it would withhold $1 million in its funding for the United Nations following the passage by UNESCO of a resolution that condemned the country’s sovereignty in Jerusalem.

Israel’s annual contribution to the United Nations amounts to over $40 million, a spokesman for the mission told JTA in an email in January after Israel said it would withhold $6 million following a Security Council resolution the previous month condemning settlements.