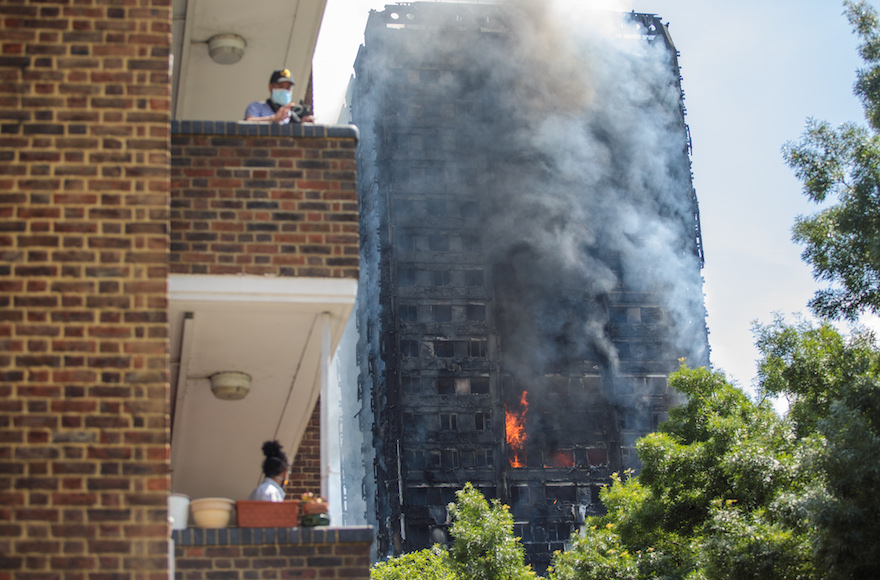 (JTA) — A British Islamic activist who said during a rally in London last month that “Zionists” were responsible for the deaths of dozens in a tragic apartment fire is under investigation by police.

London Metropolitan Police are investigating allegations that Nazim Ali,  a director of the Islamic Human Rights Commission, made anti-Semitic comments during the annual anti-Israel Al-Quds Day parade, The Telegraph reported. Al-Quds is the Muslim name for Jerusalem.

Ali told the June 18 rally: “As we know in Grenfell, many innocents were murdered by Theresa May’s cronies, many of which are supporters of Zionist ideology.”

At least 80 people were killed June 14 when fire swept through the low-income, high-rise Grenfell Tower apartment building in West London. Protesters blame the government for ignoring safety issues in the building.

Ali also said: “Let us not forget that some of the biggest corporations who were supporting the Conservative Party are Zionists. They are responsible for the murder of the people in Grenfell, in those towers in Grenfell, the Zionist supporters of the Tory Party.”

Footage of his comments was posted online.

In other comments he said: “It is the Zionists who give money to the Tory party, to kill people in high rise blocks…. Careful, careful, careful of those rabbis who belong to the Board of Deputies, who have got blood on their hands.”

The Board of Deputies of British Jews is the Jewish umbrella organization.

The Community Security Trust, which monitors anti-Semitism in the United Kingdom, told The Telegraph that it was “grotesque” for Ali to link his opposition to Israel with the Grenfell tragedy.

“In any circumstance, these comments would have been utterly hateful, but to hang them on what happened at Grenfell Tower beggared belief. It was, of course, a pro-Hezbollah demonstration, but such hatred would have been staggering even in Beirut or Tehran, never mind the streets of London,” a Community Security Trust spokesman told the Telegraph.

A Scotland Yard spokesman confirmed to the newspaper that allegations of anti-Semitic comments during the Al-Quds Day parade remain under investigation.