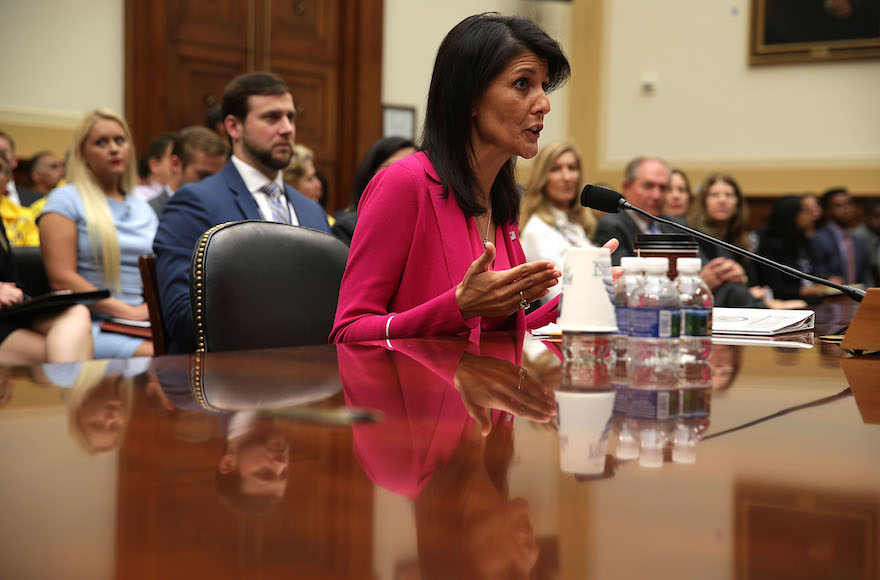 WASHINGTON (JTA) — Carmel Shama HaCohen, Israel’s ambassador to UNESCO, is second to none in his admiration for the Trump administration’s United Nations envoy, Nikki Haley. In fact, he’d like to clone her.

Shama HaCohen appreciated Haley’s efforts in trying to head off last week’s vote by UNESCO’s Heritage Committee naming Hebron’s Old City an endangered heritage site. And he believes the joint U.S.-Israeli bid to kill a resolution Israel saw as one-sided might have succeeded had a U.S. official of Haley’s caliber been onsite in Krakow, where the vote took place. (Haley conducted her efforts from New York.)

“We didn’t have the spirit that was strong enough,” Shama HaCohen said in an interview.

Shama HaCohen, a blunt-speaking former Likud member of Knesset, said the absence of Israel’s most important ally at UNESCO was having far-reaching effects on defending his country.

Shama Hacohen is not the only official on the front lines of defending Israel concerned about under-staffing among the U.S. diplomatic corps.

“The issue of staffing at the State Department is critical — at UNESCO and in the myriad other areas where U.S. leadership is crucial,” Jonathan Greenblatt, the Anti-Defamation League’s CEO, told JTA. “While there was a good-faith effort by Ambassador Nikki Haley and other members of the administration at UNESCO last week, the fact that there was no ambassador on the ground had an impact.”

For months, a broad array of Jewish groups and lawmakers from both parties have decried the Trump administration’s failure to fill another role: the State Department’s anti-Semitism monitor.

“We are also concerned by the Secretary of State’s seeming reluctance to appoint a special envoy to monitor and combat Anti-Semitism, which plays a critical role in raising awareness and action against anti-Semitism and anti-Israel actions globally,” Greenblatt said. “These positions should be filled as soon as possible.”

The understaffing and how it affects Israel-related diplomacy has also caught the attention of Republicans in Congress.

We “need more appointees in place,” said Kevin Bishop, a spokesman for Sen. Lindsey Graham, R-S.C., one of the Jewish state’s most ardent defenders in the Senate, when asked about Israel-related diplomacy. He pointed to remarks by Graham on NBC’s Meet the Press on Sunday: “Secretary (Rex) Tillerson needs to staff up the State Department and use it wisely,” Graham said, referring to a range of areas where he said it was AWOL. “I’m so worried about the State Department.”

A State Department official told JTA that the Trump administration remained committed to defending Israel in every international forum.

“We have been clear that the United States will oppose any effort to delegitimize or isolate Israel, wherever it occurs. We continue to do that,” said the official. “With respect to staffing, we continue to have a deep bench of experienced career professionals serving in key positions that are highly capable and able to help the Secretary lead the Department. We will continue the process of exploring and evaluating ways to improve organizational effectiveness and efficiency, including optimizing the impact of available resources.”

The White House has blamed Senate Democrats for obstructing nominations, noting in a release this week that Trump’s nominees are on average taking longer to clear the Senate than those of his predecessors. But Trump has also been slow to nominate: A June 29 count by the Washington Post showed that of the 200-plus State Department positions filled by nomination, Trump had formally nominated just 20 and that the Senate had confirmed eight.

Dan Shapiro, until January the Obama administration’s envoy to Israel, said career professionals were no substitute for diplomats who had the confidence of the administration.

“When in the past, during the Obama administration when we were fighting an anti-Israel resolution to recognize a Palestinian state, it was all hands on deck,” he said. “We would have ambassadors in capitals raising it, we would have senior officials, secretaries and under secretaries weighing with counterparts.”

Without the personal relationships diplomats cultivate with their counterparts in other countries, Shapiro said, “you don’t have the tools available, you can’t get to the most senior officials in other governments to be engaged to rally other countries to stand with us.”

Shapiro said the lack of appointees is hindering another issue Israel says is critical: Pressing the Palestinians to stop paying families of people jailed or killed while carrying out attacks on Israelis.

“We should be engaging many other governments at senior levels to urge them to let the Palestinians know we think it’s unacceptable,” he said.

Prime Minister Benjamin Netanyahu’s government is generally pleased with the Trump administration’s priorities, and appreciates that Trump himself raised the payments-to-prisoners issue in his meetings with Palestinian Authority President Mahmoud Abbas. Indeed, Shama HaCohen said that part of his frustration was that the career diplomats in the U.S. UNESCO office were carrying out Obama-era policies seen as friendlier to UNESCO — not because they sought to undermine Trump, but because it was the only guidance they had in hand.

Malcolm Hoenlein, the executive vice president of the Conference of Presidents of Major American Jewish Organizations, said the UNESCO vote might have been an outlier: The Obama administration stopped paying dues in 2011 because UNESCO recognized “Palestine” as a state, and as a result the United States lost its capacity to vote, diminishing its influence at the body in any case.

Daniel Mariaschin, the executive vice president of B’nai B’rith International, said that the lack of staffing was a problem, but that Israel’s overall obstacle at the U.N. and its affiliated bodies was institutional bias.

“There’s no question, having ambassadors with the worldview of Nikki Haley, building relationships, is important,” he said. “But automatic majorities, block voting which is built in the U.N. infrastructure. that’s really where these problems lie.”