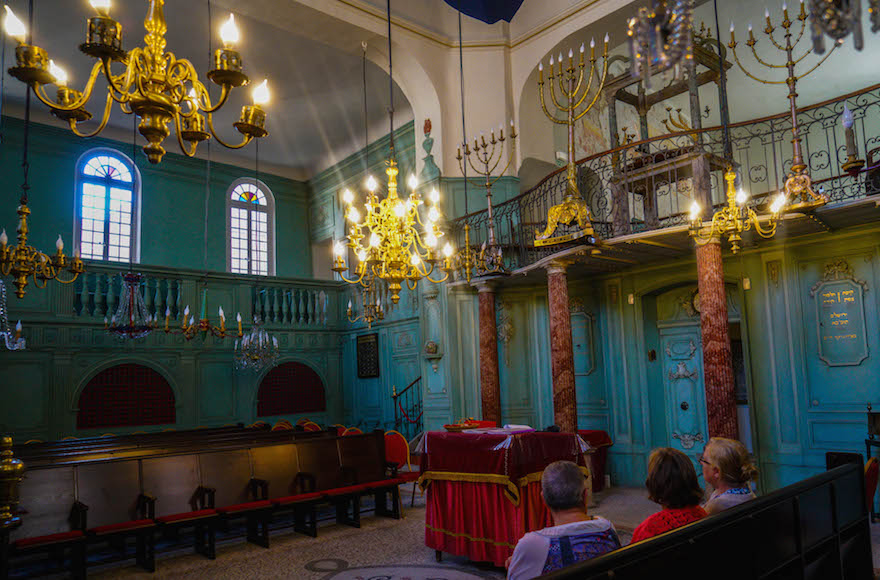 Women from the Jewish community of Carpentras chatting while preparing for Shabbat at the town's synagogue, July 7, 2017. (Cnaan Liphshiz )
Advertisement

CARPENTRAS, France (JTA) — The synagogue in this Provence town is Western Europe’s oldest functioning Jewish house of worship — and one of the prettiest on the continent.

The Synagogue of Carpentras, which this year is celebrating its 650th anniversary, has a Baroque-style interior and a gold-ornamented hall with a blue domed ceiling. The rabbi’s pulpit is, unusually, on a balcony that overlooks the pews and the Torah ark  — the work of the non-Jews who built the synagogue in a Christian style in the 16th century atop its earlier structure, which was first established in 1367.

Most impressive of all is that the synagogue is housed within a larger building that once functioned as an ancient Jewish community center of sorts. The space boasts spectacular facilities, including a 30-foot-deep ritual bath, or mikvah, fed by turquoise waters from a natural spring, another heated bath, a kosher abattoir and a bakery with large ovens that burned year round.

Yet the architects did their best to conceal the building’s splendor. The small, wooden front door is but a drab opening in a simple facade that unlike Europe’s other majestic synagogues does not even hint at the bling inside.

The juxtaposition between the majestic interior and basic exterior is the result of French Jewry’s long-held desire to celebrate its greatness without attracting too much attention. 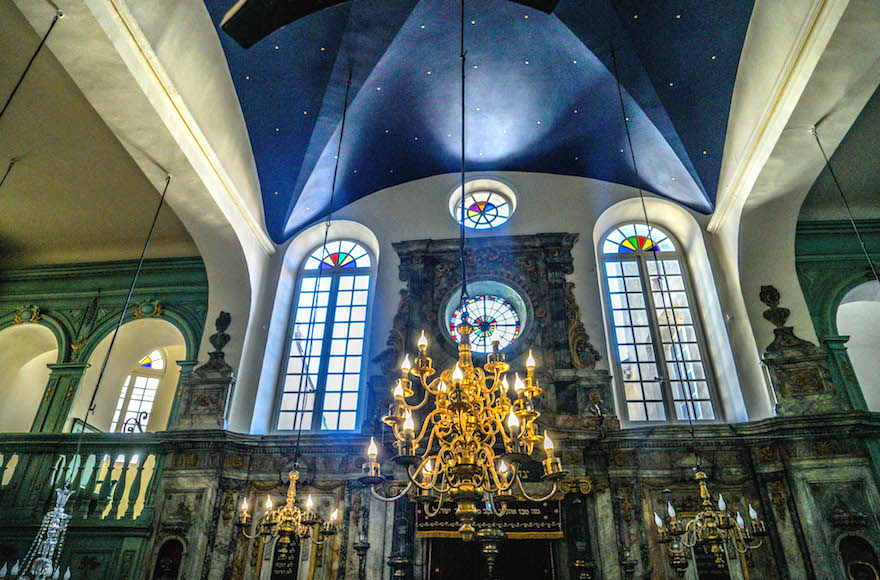 The Synagogue of Carpentras is, to French Jews today, a testament to that conflicted sentiment and tangible proof of their deep roots in a country where many of them nonetheless feel they are treated as outsiders.

“At a time when on some streets in France people are shouting ‘Jews, get out, France is not yours,’ the Synagogue of Carpentras and its 650th anniversary are proof of just how deep our roots run here,” Carine Benarous, the communications officer of the Fleg Jewish Community Center in Marseille, 80 miles south of Carpentras, told JTA last week.

Benarous was referring to a slogan that shocked many in France in 2014, when the media reported its use at anti-Israel protests in several cities.

In May, the chief rabbi of France, Haim Korsia — whom many French Jews treat with the kind of adoration typically reserved for rock stars — traveled more than six hours from Paris to spend Shabbat with the Carpentras Jewish community of 125 members. Alongside a regional archbishop, an influential imam and other rabbis from across the Provence region, Korsia also attended a ceremony marking the 650th anniversary.

“Here we acknowledge how deeply our history and our roots are anchored in the soil of France,” he said, noting that a Jewish presence has been documented in Provence since the first century.

In his speech, Korsia recalled a different slogan — one used several times by France’s former prime minister, Manuel Valls, following a wave of terrorist attacks on Jews. Valls had said that without Jews, “France isn’t France.”

The Synagogue of Carpentras, Korsia said, “is proof of that.” 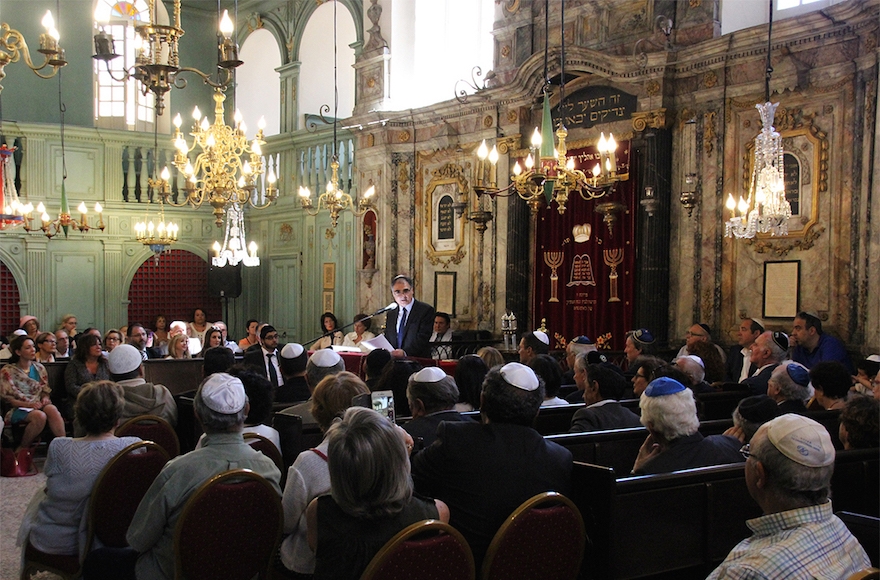 Meyer Benzecrit, the president of the Jewish community of Carpentras, delivering a speech at the town’s synagogue, May 28, 2017. (Courtesy of the municipality of Carpentras)

“I still have goose bumps from his speech,” said Françoise Richez, a Carpentras Jew who gives tours of the synagogue.

But Carpentras, she added, is also a testament to the “long and, unfortunately, unfinished history of anti-Semitism.”

Carpentras was one of only four locales in present-day France where Jews were allowed to stay even after the Great Expulsion of French Jewry, decreed by King Philip IV of France in 1306, according to Ram Ben-Shalom, a historian and lecturer at the Hebrew University of Jerusalem specializing in the Jewry of Provence.

Jews were allowed to live in closed, guarded and crowded ghettos, known as “carrieres,” in Carpentras, Avignon, Cavaillon and L’Isle-sur-la-Sorgue because these locales in Provence were on lands owned by the pope, who took in Jews in exchange for payment. Additionally, he said, Jews were made to wear distinctive clothing, often a cape.

As for the synagogues serving the carrieres, they were designed by Christians because the Jews were only allowed to work as traders or moneylenders, according to Yoann Rogier, a guide at the Synagogue of Cavaillon, which was built in 1494 but now functions as a museum of the town’s historic Jewish population, its door frames lacking a mezuzah.

As such, in both Carpentras and Cavaillon, congregants must turn their backs to the Torah ark if they want to face their rabbi, and vice versa. (In most synagogues, the rabbi’s pulpit sits on a bimah, or platform, situated in front of the ark or in the middle of the sanctuary.) To read from the Torah, the rabbis of both synagogues had to carry the Torah scroll up to their balcony. The Cavaillon synagogue still has a portable ark with wheels for this purpose.

Despite the imperfect circumstances, the Jews of Carpentras ingeniously turned their synagogue into a labyrinthine community center, making maximum use of the limited space allotted to them thanks to partitions, underground passages and interior courts that offered facilities for every aspect of Jewish life. The synagogue complex even had a special matzah bakery.

Gilberte Levy, another member of the Carpentras Jewish community, is among the many local Jews who can trace their lineage nearly to the year that the synagogue was established.

“They call me the community’s Brontosaurus,” she said, laughing.

To Richez, whose husband is descended from a Jewish family forced to convert to Christianity in Spain during the Inquisition, the Carpentras synagogue “shows that despite everything, we prevailed,” she said.

Yet Carpentras also is symbolic of more recent struggles for French Jews. 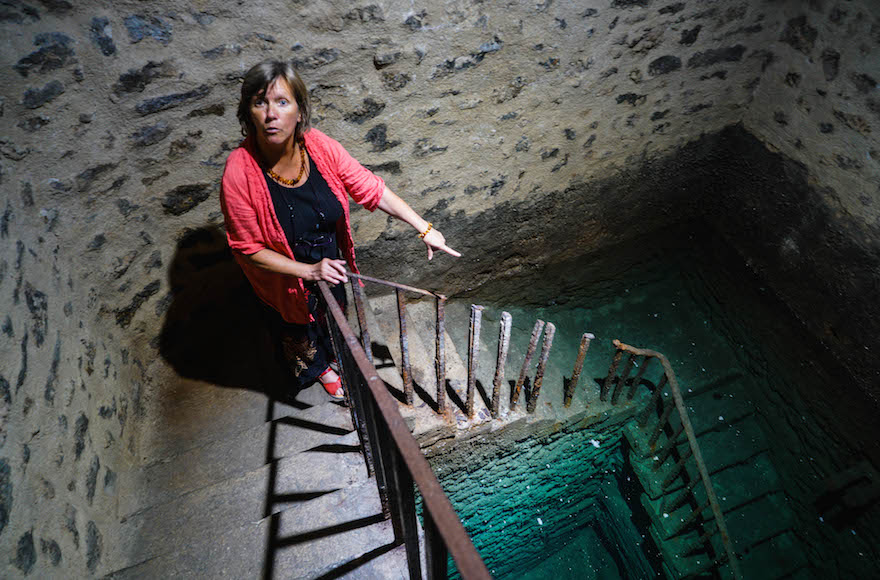 Françoise Richez talking about the ritual bath, or mikvah, of the Jewish community of Carpentras, July 7, 2017. (Cnaan Liphshiz)

In 1990, it saw one of the worst cases of anti-Semitic vandalism in France after the Holocaust: Neo-Nazis smashed dozens of tombstones in the ancient graveyard. The incident predated the current wave of anti-Semitic violence that is causing many thousands of Jews to leave France and was particularly shocking.

Today, Carpentras is one of the few active synagogues in France without army protection. Unlike most French synagogues, visitors may enter without first undergoing a security inspection. While this is good for tourism, “the important thing is that the tourism stops at 6 p.m. and this returns to being an active Jewish synagogue,” said Richez, a mother of two. “We don’t want to end up with just a museum, like in Cavaillon.”

There used to be more incidents, “anti-Semitic shouts and such around the synagogue,” Richez added, but matters improved after the municipality closed the synagogue’s street to vehicles.

“All in all,” she said, “I think we’re pretty privileged here.”