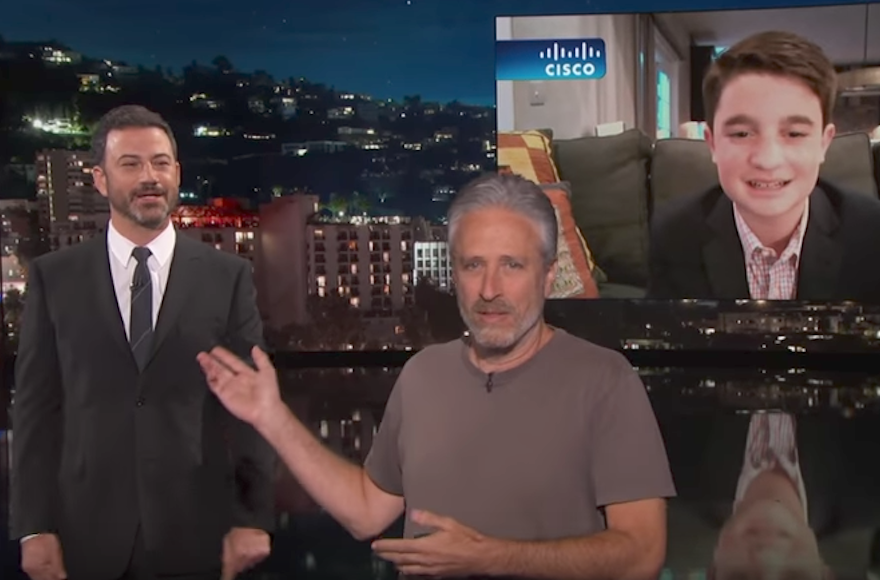 (JTA) — Will Rubin of Media, Penn., is a major Jimmy Kimmel fan. So major, in fact, that the theme of his recent bar mitzvah party was “Jimmy Kimmel Live.”

Kimmel, naturally, invited Rubin onto the show to talk about his big day — but, in a hilarious move, former “Daily Show” host Jon Stewart makes a surprise appearance in the studio, seemingly offended that he wasn’t the newly minted man’s first choice.

“You probably had your choice of really, you know, of idolizing any talk show host, and you could have gone with a Jew,” he deadpans.

The bit goes on with Stewart ribbing Kimmel for not being a member of the tribe. “Don’t be fooled by his learned-looking beard and his puffy, sad eyes,” he quips. “He’s not rabbinical — he’s just unhealthy.”

While Kimmel — who dated comedian Sarah Silverman for several years — is often mistaken as a Jew, he was raised Roman Catholic and was once an altar boy.

Kimmel, for his part, laughs his way through Stewart’s bit, suggesting this compromise to Rubin: “Maybe you can have a Jon Stewart-themed wedding.”