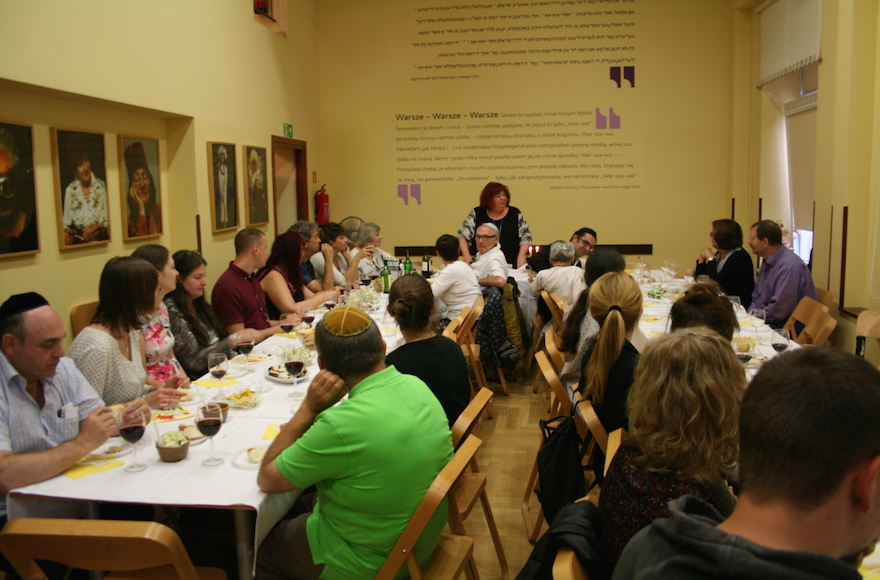 Golda Tencer, standing, at a Shabbat dinner at the International Seminar in Yiddish Language and Culture, now in its 15th year. (Katarzyna Markusz)
Advertisement

WARSAW, Poland (JTA) — When Gołda Tencer, the director of the Shalom Foundation and the Jewish Theater in Warsaw, lit the Sabbath candles last Friday, she was accompanied by dozens of people from various countries. Though their mother tongues differed, the voices at the table were united by a common language: Yiddish.

The assembled crowd of about 60 had come to this capital city for three weeks in July to study Yiddish, learn its grammar, sing songs and discover  something about Jewish-Polish history.

The International Seminar in Yiddish Language and Culture, which Tencer founded, is now in its 15th year. Classes are held in Muranów, a district that was once heavily Jewish and where the Warsaw Ghetto was established. It was here, during World War II, that Emanuel Ringelblum hid his archive that contained thousands of Yiddish documents about the extermination of Jews. And it is here that the seminar seeks to build upon the rich legacy of the Yiddish-speaking world.

Through the program Tencer, who also established Warsaw’s Center for Yiddish Culture 20 years ago, seeks to help pass on the immense heritage of Yiddish culture.

“The nation died, but culture and Jewish literature did not perish,” said Tencer, who grew up in Lodz. “Our duty is to pass this thread of our Jewishness.”

Among the seminar participants is Barbara Szeliga, an actress who worked at the Jewish Theater for more than 30 years. When she began acting, the theater’s productions were only in Yiddish.

“I had to learn the language to know what I was playing,” she said.

At the time there were no textbooks, dictionaries or possibilities to photocopy anything.

Szeliga is attending her fourth seminar, but she does not need Yiddish in order to work.

“I learn it for pleasure,” she said.

The commonality of Yiddish among the program’s participants — despite their different nationalities — is what she enjoys most about the seminar.

“I understand English, German and Russian,” she said, “but I reflexively talk to them in Yiddish.”

Participant Eugen Parnes lives in Malmo, Sweden; he and his parents left Poland when he was 17. Growing up in Wałbrzych, in southwestern Poland, he attended a Jewish school and his parents spoke Yiddish. Yet the surrounding atmosphere was not a good one.

“Little children called in the yard, ‘Jews, you killed Jesus,'” he recalled. “Who told them that? Their parents at home. Those children threw rocks at us.”

By the time Parnes and his family left Poland in 1971, Wałbrzych’s Jewish population had dwindled to just 1,000 from 20,000 in the postwar period.

“Most people at my age do not know Yiddish because their parents did not talk to them in that language, and some did not even know they had Jewish roots,” he said.

Parnes came to the seminar, which runs through July 21, because he enjoyed speaking in Yiddish — and there was no one in Sweden to converse with.

“Although I can speak, I forgot how to read and write,” he said.

Natalia Krynicka, who teaches Yiddish and Jewish literature at the Sorbonne in France, was teaching at the seminar for the fourth time.

“It’s always a great experience for me,” she said, adding that it is especially illuminating to learn about a language in a place where it was once so alive.

Participants can read a story by the late 19th-century author I.L. Peretz, for example, “and then we can go to the street where he lived, or we can visit his grave in the Jewish cemetery,” Krynicka said.

In the mornings, students learn Yiddish. In the afternoon they listen to lectures and take walks.

“The extra program, the walking tours, is very important,” Krynicka said. “We can realize how much history can destroy and how much literature can save.”