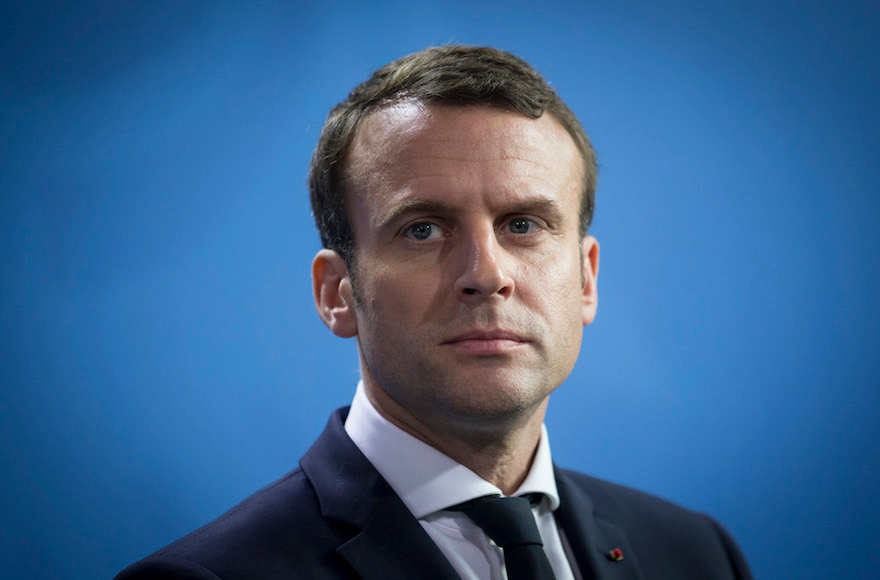 Newly-elected French President Emmanuel Macron at a press conference at the Chancellery in Berlin, May 15, 2017. (Axel Schmidt/Getty Images)
Advertisement

PARIS (JTA) – French President Emmanuel Macron condemned anti-Zionism as a form of anti-Semitism at a commemoration of the 75th anniversary of the Vel d’Hiv deportations.

“We will never surrender to the expressions of hatred,” Macron said Sunday in Paris. “We will not surrender to anti-Zionism because it is a reinvention of anti-Semitism.”

Israeli Prime Minister Benjamin Netanyahu also was among the more than 1,000 people on hand for the ceremony — the first time an Israeli prime minister had attended. The rite was held near a monument that was erected where the stadium stood before it was demolished decades ago.

Netanyahu, speaking partly in French, thanked Macron for inviting him to the ceremony, calling the gesture a “strong message” attesting to the friendship between Israel and France. He said the two countries must “stand united” against “militant Islam.”

Many politicians in France have acknowledged their country’s responsibility for the murder of nearly a quarter of its Jewish population, including Jaques Chirac, who as president in 1995 said that France “carried out the criminal insanity of the occupier” at Vel d’Hiv.

Former French Prime Minister Manuel Valls has consistently called anti-Zionism a form of anti-Semitism, but a French president in office had never made such a statement publicly prior to Macron.

Macron in his address said he had come to be part of the succession of French presidents who, following Chirac’s address, acknowledged French culpability for Vel d’Hiv.

“Not a single German was involved,” Macron said, adding that he rejects “those who wish to say that Vichy’s France wasn’t representative of the French nation because “the Nazis knew they could count on the obedience” of that government and thousands of Frenchmen serving it. He also praised Frenchmen who saved Jews.

The Vel d’Hiv roundup was carried out under orders from the Nazis by the authorities of the Vichy collaborationist government, which controlled part of France following the country’s occupation by Nazi Germany.

In April, far-right politician Marine Le Pen said that “France, as a nation, is not responsible for” what happened at Vel d’Hiv, prompting Macron, who was then running for president against the leader of the National Front party, to visit a Holocaust monument in protest of her statement.

Earlier this month, the Communist Party of France condemned Netanyahu’s attendance at the Vel d’Hiv ceremony, which is an official day of commemoration in France.

The ceremony “is about peace, whereas the Israeli prime minister is a man of war,” the party said in a statement.

Natan Sharansky, board chairman of the Jewish Agency, praised Macron’s declaration on anti-Zionism.

“When one of the most important leaders in Europe recognizes that modern anti-Semitism frequently cloaks itself with the veil of anti-Zionism, tearing the mask off the face of radical anti-Zionists, this is a highly significant development,” he said. “President Macron’s remarks serve to further clarify the nature of modern anti-Semitism and facilitate efforts to combat it.”