Festival organizers in Krakow ask: Who speaks for Jewish culture? 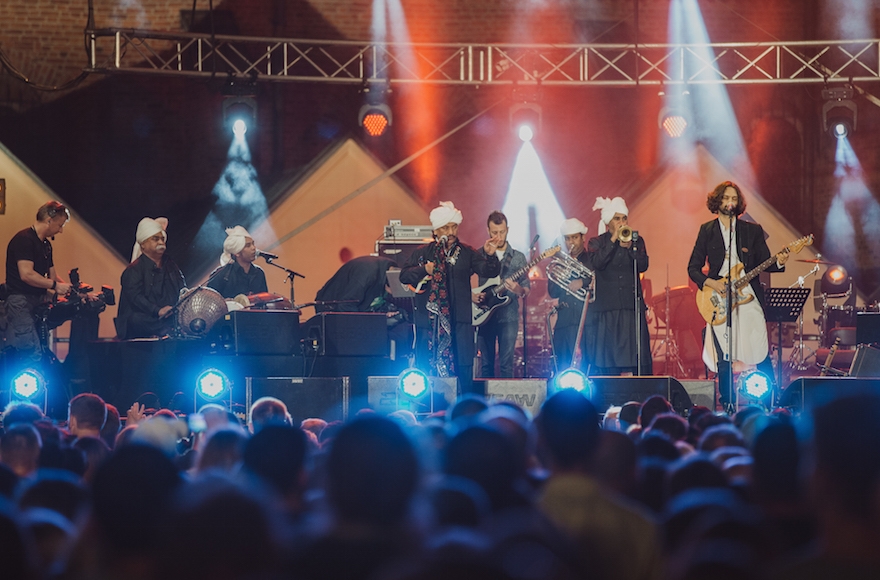 KRAKOW, Poland (JTA) – For four days this summer, a trio of artists and performers dressed in rabbinical-looking garb took turns sitting at a table behind an open air booth hawking good luck to passers-by alongside a bustling street in the heart of Kazimierz, this city’s lively Jewish quarter.

Playing the character of the “Lucky Jew,” the actor sat at a desk laden with an accounting ledger, an old-fashioned inkwell and a quill pen in a small theatrical set designed to resemble a picture frame. The scene was a look-alike of a Polish folk painting depicting a traditional-looking Jewish man in a similar pose that is widely popular in post-Holocaust Poland.

With wry humor, warm conversation and theatrics, Jason Francisco, Michael Rubenfeld and Menachem Kaiser brought the mythical image to life, offering good fortune in exchange for a few Polish zlotys. Their street performance both poked fun at the stereotypical trope of Jews as money handlers while provoking serious questions about the lingering attraction of Polish folk figurines of archetypal Jews. Are they anti-Semitic or, as some Poles see them, a form of respect for Jews?

The performance aims to create a “meaningful interaction not with a Jewish stereotype, rather a real living Jew made approachable through a play on a stereotype,” Francisco, a photographer, artist and essayist, explains on his website.

The performance of “Lucky Jews” made its debut as part of  the inaugural Festivalt, a series of site-specific, artistic and theatrical events created by Rubenfeld, Francisco and several other Krakow-based international artists and performers. Celebrations of Jewish culture, like the ubiquitous figurines, are familiar in Poland. Festivalt coincided with the 27th Krakow Jewish Culture Festival, a hugely popular Jewish music and arts extravaganza that for its nine days attracted an estimated 30,000 visitors and residents to this splendid medieval city. 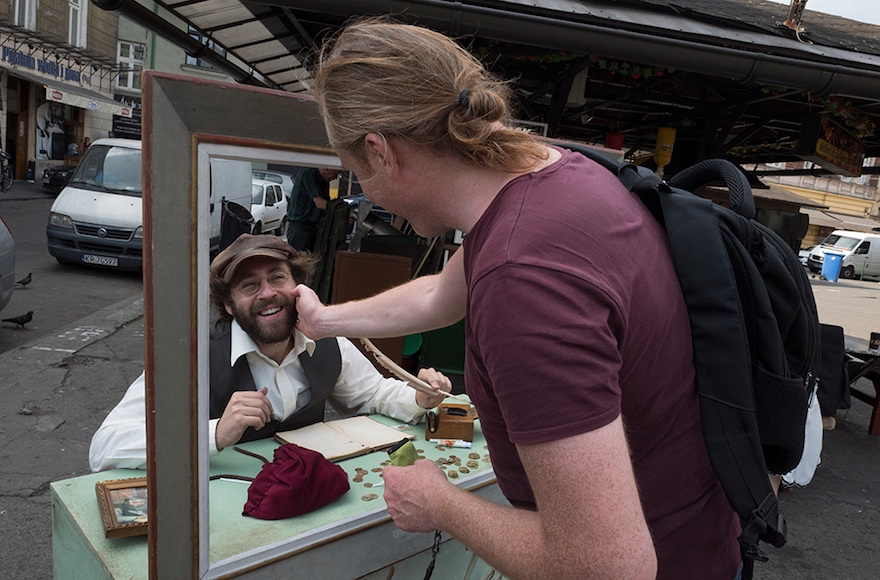 But there’s an irony to the success of the main festival, noted Jonathan Ornstein, executive director of the Jewish Community Center of Krakow: Non-Jews created and led an event that helped rekindle Jewish life in Krakow. The festival’s unexpected success raises the question of who speaks for Jewish culture.

“These are complicated issues,” Ornstein said.

Confronting those complex questions through the arts is precisely the reason behind Festivalt, according to Rubenfeld and his partners, who also include writer Maia Ipp and designer Magda Rubenfeld Koralewska. Rubenfeld, who now makes his home in Krakow and Canada, acknowledges the wealth of programs offered at the main Krakow Jewish Culture Festival and by the JCC and Galicia Jewish Museum.

But the organizers of Festivalt envision their programming as an alternative stage that pushes the boundaries with challenging and edgier fare meant to “complement,” not compete, with the cultural festival.

In addition to “Lucky Jews,” Festivalt included programs from a queer arts collective, a mild-mannered street action that took aim at how a former synagogue is now rented out as a pub and disco, and a production of “We Keep Coming Back,” an engaging multimedia play by Rubenfeld. It traces the real-life journey Rubenfeld made with his mother to the Polish towns where her Holocaust survivor parents once lived.

“We did not see a space that placed a specific focus on presenting art that had a critical voice,” Rubenfeld said of the main festival in an email. “This is something we had all been doing one way or another … and felt this was the right year to come together to start something new.”

Still, the influence of the Krakow Jewish Culture Festival cannot be discounted.

In the nearly three decades since staging its first summer concerts of klezmer bands, the festival has evolved from a quirky, bold and even maverick idea to one of the most respected and popular summer festivals in Europe. At the time Janusz Makuch launched the festival in 1988, many Jews thought of Poland only through the lens of the Holocaust and the Nazi death camps of Auschwitz, some 40 miles from Krakow.

Makuch, who is not Jewish, had a vision to counter that prevailing perspective through music and the arts that reflected centuries of Jewish presence in Poland rather than its absence. 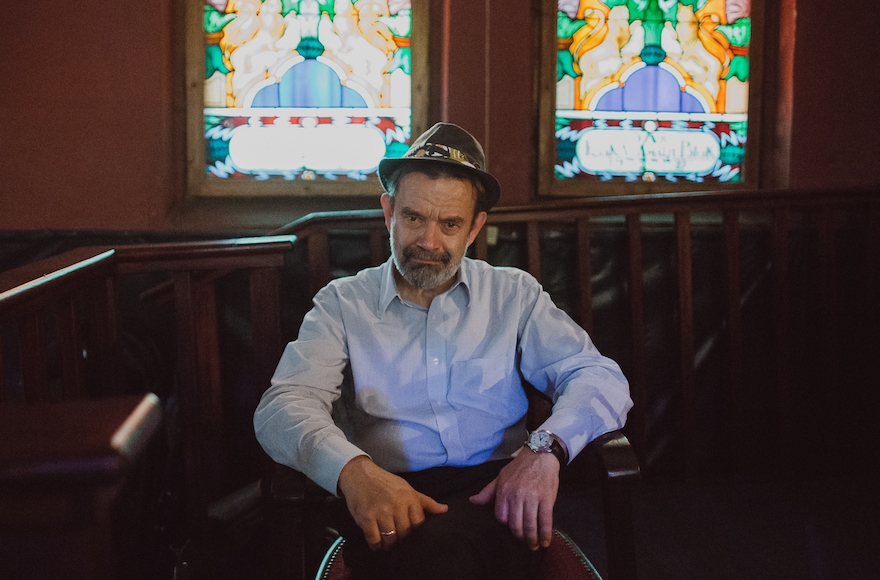 “You can draw a straight line between the Jewish Culture Festival and the rebirth of this 700-year-old Jewish community [in Krakow]. To me that’s amazing,” said Ornstein, whose JCC has year-round programming for all ages, from Holocaust survivors to young people discovering their Jewish roots.

In a conversation at the JCC as the main festival was kicking off (and just five days before his marriage to Kasia Leonardi, who he met at the JCC), the 48-year-old, American-born Ornstein said the festival has brought an appreciation and familiarity of Jewish culture to the thousands of non-Jews who attend. But even more significant is the festival’s impact on Jewish life in the city.

“One of the reasons Krakow is such a welcoming place for the Jewish community today is the work the festival has done for the last 27 years,” Ornstein said. “Jews feel safe coming out of the closet as Jews.”

This year, the JCC and the Galicia Jewish Museum jointly sponsored 10 days of independently produced programs, many in partnership with the festival. The garden courtyard outside the JCC, in the heart of Kazimierz and all the festival goings-on, was turned into a relaxed summer beer garden.

Some 650 people – locals mixed with tourists, scholars and donors — welcomed Shabbat at the Friday night JCC dinner held annually during the festival.

The theme for this year’s festival was Jerusalem, a nod to the 50th anniversary of the unification of the city following the 1967 Six-Day War. It featured more than 200 events, concerts, exhibitions, tours and talks, including a multisensory culinary program hosted by the National Library of Israel.

Ornstein acknowledged the tremendous overlap in the audiences at the various programs sponsored by the different organizations, and most attendees don’t draw a distinction.

“The festival is a unique, one-week event. It’s important for us that anyone who comes and participates understands that there is a resurgent Jewish community in Krakow,” he said.

Ornstein welcomed Festivalt to the embarrassment of cultural riches during the festival week.

“The city has become a place on the map of Jewish culture in the world,” he said. “They [Festivalt] did interesting programming and I hope they will continue. There is plenty of room in Krakow for Jewish culture.”

(Penny Schwartz, a freelance journalist in Boston, traveled to Krakow on a study trip sponsored by the Polish Cultural Institute in New York, which had no involvement in or knowledge of her reporting.)