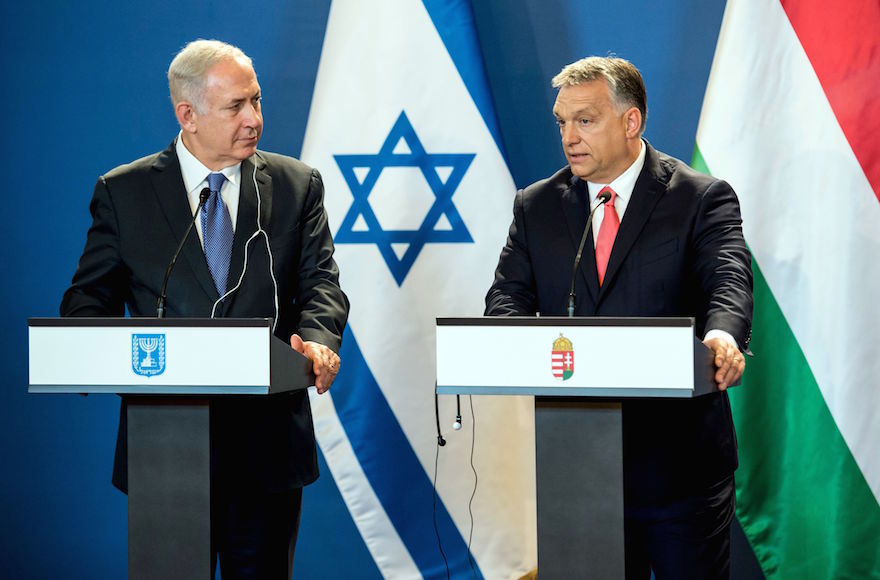 (JTA) — Hungary committed a “sin” in not protecting its Jewish citizens during World War II and collaborating with the Nazis, the country’s prime minister said while vowing it would never happen again.

Viktor Orban, speaking at a joint news conference with Israeli Prime Minister Benjamin Netanyahu following their meeting Tuesday, also said that Hungary has a “zero tolerance” policy toward anti-Semitism and he would work to put a stop to it in Europe.

Meanwhile, Netanyahu told reporters he discussed with Orban concerns raised by the Jewish community about anti-Semitism and security in the aftermath of a government billboard campaign against the Jewish-American billionaire George Soros over his support for welcoming immigrants. Jewish leaders said the campaign incited anti-Semitic expression.

“He reassured me in unequivocal terms, just as he did now, publicly,” said Netanyahu, whose visit to Hungary came just after the campaign ended. “I appreciate that. These are important words.”

Orban told reporters, speaking about the World War II era, “We are aware of the fact that we have quite a difficult chapter of history behind us. And I wanted to make it very clear to him that the Government of Hungary, in a previous period, committed a mistake, even committed a sin, when it did not protect the Jewish citizens of Hungary.

“I want to make it clear that it is our belief that every single Hungarian government has the obligation to protect and defend all of its citizens, regardless of their birth and origins. During World War II, this was something, a requirement that Hungary did not live up to, both morally or in other ways. And this is a sin, because we decided back then, instead of protecting the Jewish community, to collaborate with the Nazis.

“I made it very clear to the prime minister that this is something that can never, ever happen again, that the Hungarian government will in the future protect all its citizens.”

Orban asserted in a speech last month that Hungarian Nazi collaborator Miklos Horthy, who was an ally of Adolf Hitler, was one of “a few outstanding statesmen,” thanks to whom “history did not bury us beneath itself after all.” Horthy passed anti-Semitic laws and oversaw the murder of hundreds of thousands of Jews.

Referencing the immigration debate, Orban said he told Netanyahu, “On the part of the Hungarian government, I made it very clear that we respect and acknowledge the right of Israel to self-defense, and this is something we also believe of ourselves, that we would like our self-defense to be acknowledged by others.

“I have made it clear that we are in a serious, substantial debate with the European Union because we do not want to have a mixed population. We do not want to change the ethnic mix in this country by any artificial outside pressure. We would just like to remain the way we are, even if I have to admit that we are not perfect.”

Netanyahu, making the first visit to Hungary by a sitting Israeli prime minister, thanked Orban for “standing up for Israel in international forums.”

“You’ve done that time and again. We appreciate this stance,” he said, “not only because it’s standing with Israel, but it’s also standing with the truth.”

Orban’s statements following his meeting with Netanyahu were not unprecedented. Orban in a previous speech said: “Hungary failed to live up to its commitment to its citizens during World War II, both morally or in other ways. And this is a sin, because we decided back then, instead of protecting the Jewish community, to collaborate with the Nazis.”

“Orban again used the same expression that Hungary was guilty only for collaborating with the Nazis. Orban already used in his earlier statement this formula with his clear intention to avoid saying that ’Hungary – was not only collaborating with the Nazis – but was fully responsible for what happened to the Jews during the Holocaust in Hungary’,”  Judit Molnar, a Hungarian Holocaust historian, said on Tuesday’s opposition Club Radio program.

“Hungary was the first country in Europe to introduce anti-Jewish laws, already in 1928, … in order to exclude the Jews from studying at the universities,” Molnar also said, adding:  “Hungary even deported Jews, and killed 18,000 of them  in 1941, three years before the German occupation of Hungary!  The Hungarian authorities sent Hungarian Jews, calling them ‘aliens’ out of the country to be killed in then-Ukraine, in the site called ’Kamenetz Podolsk’.”

“Hungary was not only guilty of collaborating with the Nazis, but committed sin for initiating and fully cooperating in the extermination of the Jews of Hungary, thus were responsible themselves for the  killing of the Jews,” Molnar said, criticizing Orban for repeating his old statement about “collaboration” with the Nazis,”  which she said places full responsibility of the country’s treatment of the Jews on the Germans and not on the Hungarians.

Also today on the Club Radio were reactions to Orban’s statement saying that it was typical; “double speech” of the Hungarian prime minister — regretting the tragic fate of the Jews in the Holocaust in front of Netanyahu, but earlier praising Horthy, the Nazi collaborator.

There is no credibility in Orban,” one Holocaust survivor said Tuesday.