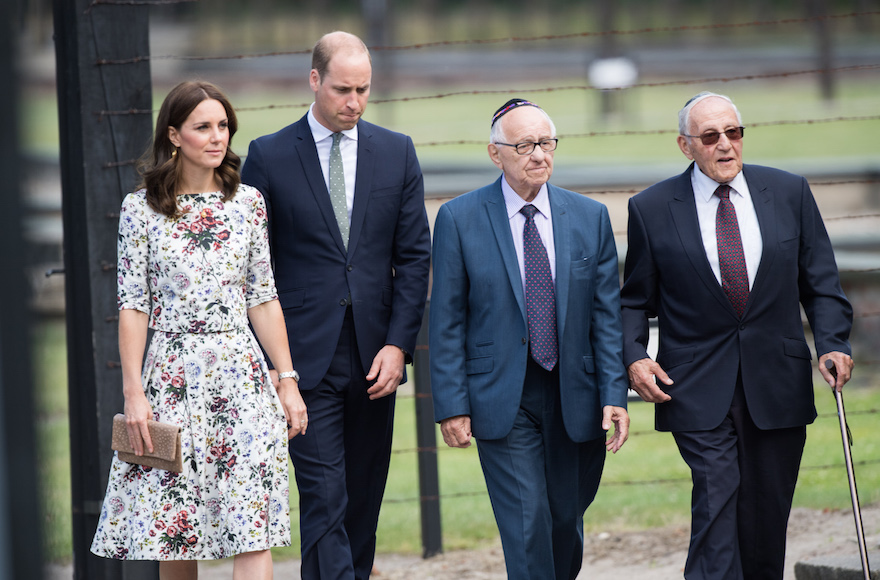 GDANSK, POLAND - JULY 18: Catherine, Duchess of Cambridge and Prince William, Duke of Cambridge walk with with former prisoners as they visitsformer Nazi Germany Concentration Camp, Stutthof during an official visit to Poland and Germany on July 18, 2017 in Gdansk, Poland. (Photo by Samir Hussein/WireImage)
Advertisement

WARSAW, Poland (JTA) – Britain’s Prince William and his wife, Kate, visited the site of the Stutthof concentration camp in Poland and met with five Holocaust survivors.

The Duke and Duchess of Cambridge, who are on a five-day visit to Poland and Germany, toured the Stutthof Museum on the grounds of the former Nazi camp east of Gdansk on Tuesday.

Reports said the royal couple were visibly moved by what they saw, including displays with piles of shoes that had belonged to camp inmates and gas chambers where inmates were killed. They placed stones at the camp’s memorial to its victims, a Jewish custom.

“The information provided by the British embassy shows that the duke has never visited any former Nazi concentration camp before,” Piotr Tarnowski, director of the Stutthof Museum, told JTA. “Our museum was the first such place for them.”

In the guest book, their message read: “We were intensely moved by our visit to Stutthof, which has been the scene of so much terrible pain, suffering and death.

“This shattering visit has reminded us of the horrendous murder of six million Jews, drawn from across the whole of Europe, who died in the abominable Holocaust.

“It is, too, a terrible reminder of the cost of war. And the fact that Poland alone lost millions of its people, who were the victims of a most brutal occupation.

“All of us have an overwhelming responsibility to make sure that we learn the lessons and that the horror of what happened is never forgotten and never repeated.”

Former Stutthof prisoners Zigi Shipper and Manfred Goldberg, who live in Britain, were among those who spoke with the royal couple about their experiences along with Marek Dunin-Wąsowicz, Maria Kowalska, Edward Anders. Goldberg and Shipper met in a subcamp of Stutthof and today speak in schools throughout Britain about their experiences.

William and Kate arrived Monday in Poland and visited the Memorial of the Warsaw Uprising.