Israel’s government opposes adoption by same-sex couples, so gay celebrities are speaking out 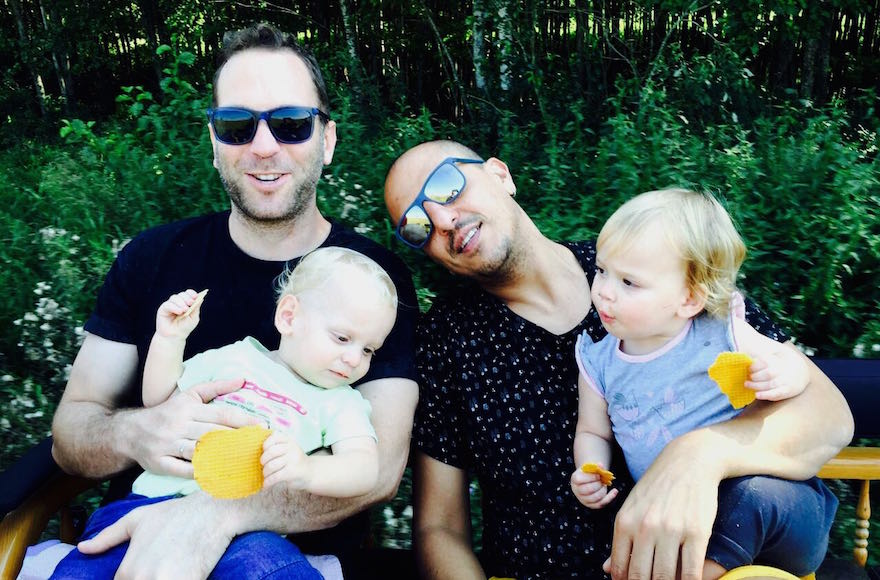 Ohad Nitman, on the left, (Courtesy of
Advertisement

TEL AVIV (JTA) – Israel may pride itself on being an oasis of LGBT tolerance in the otherwise hostile Middle East, but many gay citizens are less than wowed.

On Sunday, the government came out in favor of effectively preventing adoption by same-sex couples. Responding to a petition to the High Court of Justice challenging the current policy, it said that given the “reality of Israeli society,” same-sex parents put an “additional burden” on their adopted children.

Led by some gay celebrities, Israel’s LGBT community and its allies have launched a campaign against the government’s declared position, earning widespread public support. The Israeli media have been filled with criticism of the country’s right-wing leadership alongside accounts of loving same-sex parenting.

Many have accused politicians of touting Israel’s LGBT bona fides to the world while failing to stand up for gay rights at home. Prime Minister Benjamin Netanyahu, who in a U.N. speech in 2016 talked about gay rights, was singled out. But the top target of criticism has been Cabinet minister Ayelet Shaked, whose Justice Ministry, along with the Welfare Ministry, helped make the government’s case against same-sex adoption.

On Sunday, gay Israeli pop star Harel Skaat urged young LGBT Israelis to vote politicians like Shaked out of office. He further suggested they protest the government’s position by refusing to contribute to the country, or even by leaving.

“I call on you not to join the army! And you know what, not even to pay taxes on the money you will earn,” he wrote on Facebook. “Go and disperse all the great and varied good that you have to give in places that accept you and not those that don’t.”

Singer Amir Frischer-Gutman declared on television that gay Israelis were done making the country look good without getting government support in return. Pro-Palestinian activists over the years have accused Israel of “pinkwashing” its conflict with the Palestinians by promoting its gay-friendly laws and culture.

“We as people have for years felt they are not accepting us. We are good only for speeches at the United Nations and to be the fig leaf of this country,” Frischer-Gutman told Israel’s Channel 2 on Monday. “I will not have an answer for my child the day he asks me why I have to pay taxes to this country. And why should I go to the army for a country that does not respect you and me?”

Ohad Hitman, 40, a top Israeli singer and composer, told JTA that gay artists like him are stepping up because they are “dreamers” who want to create a better world. He said he personally felt an obligation to “speak his truth.”

On Monday, Hitman, who is married to TV commercial producer Ran Hurash, 30, wrote a Facebook post addressed to Shaked from the perspective of their 2-year-old twins, Eva and Berry. The tongue-in-cheek message purported to agree that gays are bad parents, saying the children’s “emotional burden” includes limited TV watching privileges and early bedtime.

The post concluded with a call for an “in-depth dialogue of love” and national unity. By Wednesday it had received 24,000 “likes” and hundreds of mostly supportive comments.

Hitman described himself as mostly apolitical, but said representatives of several Israeli lawmakers have called to consult with him. Meanwhile, other members of the gay community have publicly pushed the government to change its position on adoption.

In its petition to the High Court, the Association of Israeli Gay Fathers, together with the Israel Religious Action Center of the Reform movement, called these policies discriminatory. In its response, the government essentially agreed but called them justified.

Meanwhile, surrogacy has grown increasingly popular. In 2013, Israelis had 227 births by surrogate mothers; 87 of them were gay couples.

Hitman and Harush paid a surrogate mother. In April 2015, they were among a group of gay male couples that made a high-profile flight to pick up their children from Nepal following a massive earthquake there.

Amid the public outcry over the government’s position against same-sex adoption, the National Association of LGBT in Israel quickly organized a protest of the policy to take place Thursday outside the Kirya government compound in Tel Aviv.

“We will not be silent when our government call us ‘exceptions,'” the group said on Facebook. “We will not say thank you because here we are not thrown from the rooftops.”

On Tuesday, Amir Ohana, the only openly gay lawmaker in the ruling Likud party and Hitman’s neighbor, said he would refuse to vote with coalition lawmakers until the government changed its stance on adoption.

There are signs the pressure was having an effect. The High Court on Tuesday gave the state two months to reconsider its position on adoption. Welfare Minister Haim Katz had asked the court for time to do so, saying the state’s response was unfortunately worded.

Spokeswoman Sharona Mann said the Welfare Ministry is recommending a “complete overhaul of the outdated law” on adoptions, though she said her suggestion is not immediately “connected to same-sex parents.”

Tom Canning, the associate director of the Jerusalem Open House — the LGBT group behind the Jerusalem Pride March — said such attitudes could ultimately make it difficult for the government to sustain its “regressive” positions.

“We’re seeing overwhelming support in Israeli society for same-sex marriage and acceptance of LGBT people in different walks of life, even outside Tel Aviv,” he said. “Even regarding the latest adoption decision, there has been a huge outcry not only from LGBT people but from all Israelis, who feel it does not reflect their beliefs.

“I don’t know if it’s enough to change government policy, but I think it’s going to be a concern for the government to manage public opinion.”

Still, Hitman said he and his friends in the gay community are not optimistic about their future in Israel. He said they feel under siege by the country’s growing and increasingly powerful Orthodox Jewish population and by right-wing politicians they say are unwilling to stand up for democratic values.

“People are worried and angry about the situation. They see Israel becoming like ‘The Handmaid’s Tale,’” he said, referring to the hit Hulu TV series about a right-wing religious cult that takes power in the United States. “Everyone knows that 20, 30, 40 years from now, the most religious people will be the majority. All of us are afraid for the first religious prime minister.”

Eventually, Hitman said, he plans to live outside Israel — in New York or London, where he hopes to stage his musicals – and believes his children will have more opportunities there. He is worried the Israeli government will make them, and their parents, “second-class citizens.”

Hitman noted another challenge faced by gay couples: All children of non-Jewish surrogate mothers must undergo an acceptable conversion if they are to be considered Jewish by the Chief Rabbinate, which controls Jewish marriage and divorce. While this is little more than a formality for babies of opposite-sex couples, the Chief Rabbinate does not allow the conversion of those who will be brought up in gay households.

“In Israel, they are not Jewish, they can’t even get married in a normal way,” Hitman said of his children. “Abroad, I believe they will be respected for who they are.”

Despite his worries, Hitman said he has received dozens of positive messages about his Facebook post from religious Jews. Even several who oppose gay adoption told him they admired him and his family and wished them the best. He read JTA a message from a well-known religious singer, who told him that his Facebook post had inspired him to move toward coming out as gay. Hitman said he planned to offer counsel to his fellow musician.

“These aren’t bad people,” he said. “I just want my kids to grow up in a decent country.”