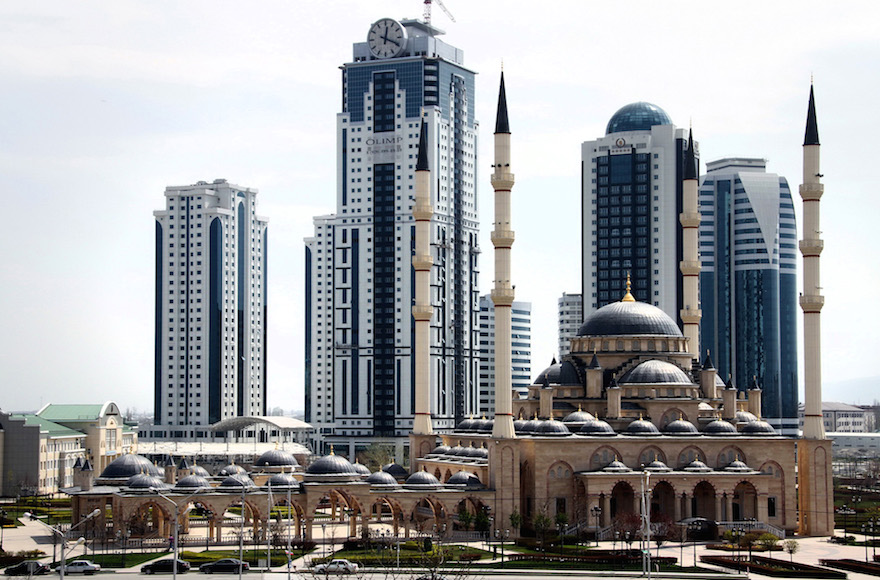 A view of the Akhmad Kadyrov Mosque, known as "Heart of Chechnya," in the Chechen capital Grozny. (STR/AFP/Getty Images)
Advertisement

(JTA) — While Russia’s mainstream Jewish leaders in Moscow firmly backed Israel’s actions in clashes this week with Palestinians at Jerusalem’s Temple Mount, the small Jewish community of Chechnya broke ranks with them and boldly condemned the Jewish state’s “provocations” against Muslims in the holy city.

At least that was the story reported in the national and local media, including the Echo of Moscow radio station and Chechnya Today – the most popular news site in the predominantly Muslim Russian republic.

There was just one problem with the news item: Chechnya apparently has no organized Jewish community, and according to some Jewish people who were born there, also next to no Jews.

The reports about where Chechen Jews stand on the issue of Jerusalem, where police and Palestinians clashed Thursday night and Friday over Israel’s decision to place metal detectors near the entrance to the Al Aqsa mosque, relied on a video message published Tuesday by a man called Mosei Yunayev.

Claiming to speak for the Jewish community of Chechnya, he joined Chechen President Ramzan Kadyrov in condemning Israel’s actions at the Temple Mount, where the mosque is situated. Chechen Jews, Yunayev said, “wholeheartedly support” the sharp-worded rebuke of Israel by Kadyrov.

“Nonsense, I doubt there are even any Jews left in Chechnya, let alone an organized Jewish community,” Tamara Rafailova Kahlon, an Israeli who was born in the Chechen capital of Grozny, told JTA on Friday. Her father, Rafoi Rafailov, heads an association of Chechen Jews in the city of Pyatigorsk, situated 150 miles west of Grozny in the North Caucasian Federal District. “They all left, I don’t know who this man speaks for,” she said.

On July 15, Kadyrov called Israel’s heightened security on the Temple Mount, where the previous day three Arab-Israeli terrorists killed two police officers before they were shot to death, “deliberate provocation to foment riots.” He described as “violent” Israel’s detention of the grand mufti of Jerusalem, who was called in for questioning after he urged worshippers to ignore a temporary closure of the compound immediately following the attack.

In response to the shooting, Israel for the first time placed metal detectors in gateways leading to the Haram al Sharif compound, which contains the Al-Aqsa mosque. Thousands of troops were deployed Friday following riots; two Palestinians were killed in the clashes.

Security checks are a “provocation that invites resistance” by Muslims, Kadyrov said.

Yunayev’s support for the condemnation by Kadyrov received considerable exposure in the Chechen media and other Russian-language publications. But Russian-speaking Jews, including community leaders, journalists and immigrants from Chechnya, dismissed and ridiculed Yunayev’s claim to represent a Jewish community that they said does not exist. 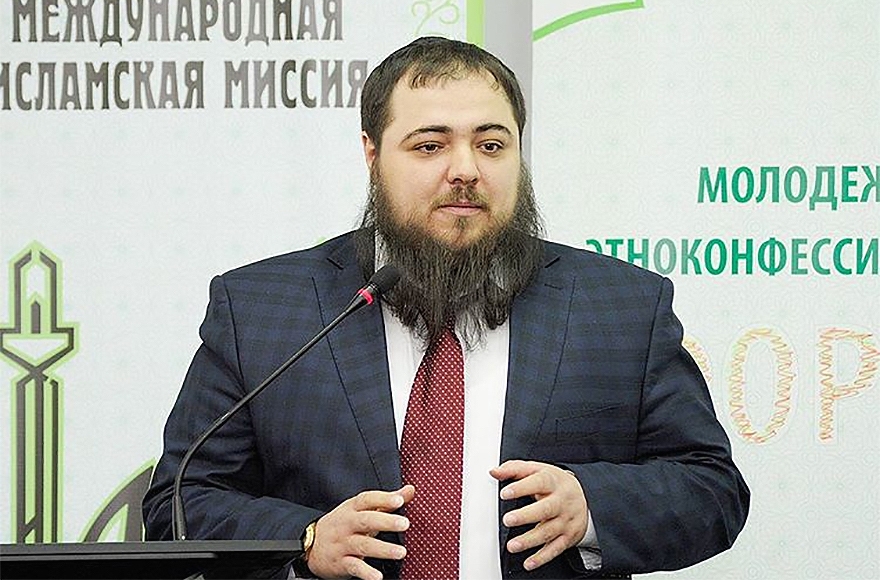 In an interview with Chechnya Today, Yunayev denied the assertions.

“Those who claim that there are no Jews in Chechnya are far from being Jewish,” he said. And he presented his credentials: “I was sent to the Chechen Republic by the Council of Elders of the Jewish People to restore the Jewish community in the region. Only true believers know how right I am in my convictions.”

JTA could not confirm the existence of an organization by that name; its only presence online originates in Yunayev’s mention in the Chechnya Today article. At other times, Yunayev presented himself as a member of the equally untraceable Congress of Jews of the North Caucasus Federal District.

Rabbi Boruch Gorin, a senior figure within the Federation of Jewish Communities of Russia, told JTA he is aware neither of that group nor of any other organized Jewish community active in Chechnya.

“Chechnya is special in that there is no Jewish community, there are no Jews there,” he told the news site Open Russia on Thursday. “Not in Grozny, not anywhere. Perhaps there are a few individuals, but there is no social community of ethnic Jews after the Chechen wars” of the 1990s and 2000s.

Thousands died in two wars that Moscow fought to quell a Muslim rebellion in Chechnya.

“Any statements from the Chechen Jewish community are made up,” Gorin said.

Chechnya did have a Jewish population in the past. Grozny had a 19th-century Ashkenazi synagogue that was turned into a music school in 1937 and then destroyed during the first Chechen war of 1994-96.

But today, “Chechnya has no Jews,” according to the website Gorskie, the official website of the Mountain Jews Community, who have lived for centuries in the Caucasus.

“After interviewing several dozen people connected with the Jewish community of Russia, as well as prominent representatives of the community of Mountain Jews, it became clear that there were no Jews left in Chechnya, and therefore there is no Chechen Jewish community,” wrote the editors of Gorskie, which is affiliated with the umbrella group of Mountain Jews communities, STMEGI. Leaders of Russian Jewry and the Mountain Jews community were unfamiliar with “the man calling himself Yunayev,” Gorskie reported.

Mountain Jews believe that “protests against the use of metal detectors have nothing to do with infringement of religious rights. Those who oppose this elementary security measure may well be recognized as collaborators of terrorists,” Gorskie’s editors also wrote.

While the existence of a Jewish community in Chechnya is questionable, there is little doubt about the presence there of the man claiming to speak for that community. Earlier this year, Yunayev established a presence on social media, where he appeared shaking hands and embracing various Chechen officials, including “our highly esteemed First Deputy Minister for North Caucasus Affairs,” as he described the Chechen politician Baysultanov Hasaevich.

“The kindness of this man did not skip the Jewish community of the Chechen Republic,” Yunayev wrote of the official. “We want to express our great gratitude on behalf of our community, for the help you have always provided and are ready to render to our community and to everyone in our beautiful District! God Almighty bless you and your family!”

Some prominent journalists in the Caucasus have been less skeptical of Yunayev’s claims and title than his coreligionists. In March, the regional correspondent of the RIA news agency, Mukhtar Amirov, referred to Yunayev as “the president of the council of Jewish communities of the Chechen Republic,” noting that both he and Yunayev are descended from the Chechen village of Dorgeli.

The scarcity of Jews in Chechnya did not prevent Kadyrov’s office from announcing the opening of a synagogue in Grozny in 2013. The announcement prompted some head scratching, including by the Russian politician and journalist Vadim Beriashvili, who said at the time that he doubted the existence of a Jewish community who might use the synagogue.

“The Chechen authorities managed to find two Jews for the opening of the synagogue, but both refused to participate,” he reported in 2013. “The reasons for their refusal can only be guessed.”