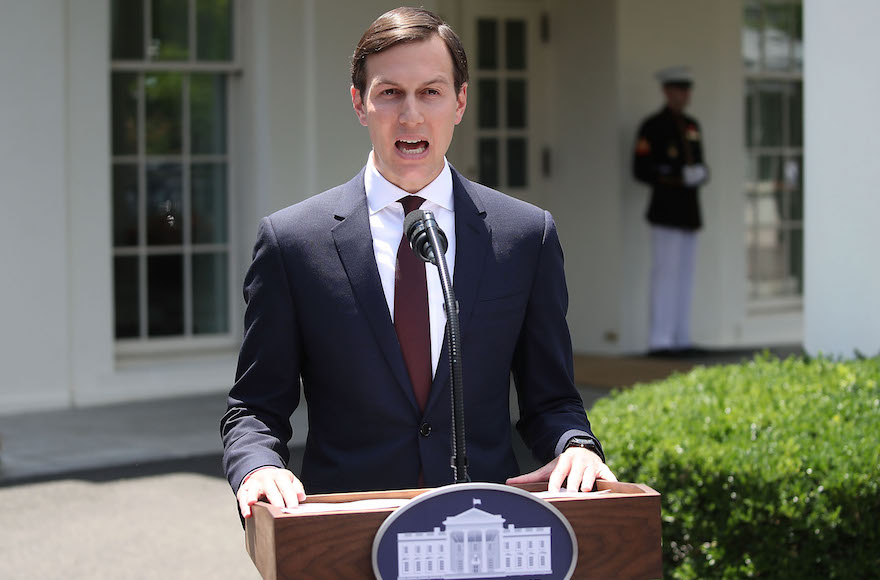 Jared Kushner reading a statement in front of West Wing of the White House after testifying behind closed doors to the Senate Intelligence Committee, July 24, 2017. (Mark Wilson/Getty Images)
Advertisement

WASHINGTON (JTA) — In a rare public statement, Jared Kushner insisted he did not collude with Russia and said the query into suspicions of a relationship between Russia and Donald Trump’s presidential election campaign “ridiculed” Trump voters.

“Let me very clear, I did not collude with Russia, nor did I know of anyone else in the campaign who did so,” Kushner, Trump’s son-in-law and a top aide, said Monday, reading a prepared statement after appearing before the Senate Intelligence Committee in a closed session.

Kushner is in the spotlight because of revelations in recent weeks that he attended a June 9, 2016, meeting organized by his brother-in-law, Donald Trump Jr., who took the meeting believing it would be with a Russian government lawyer who had compromising intelligence on Trump’s rival, Hillary Clinton. Also under review are reports that Kushner’s family real estate business, reportedly like his father-in-law’s, owes money to Russian lenders.

“I had no improper contacts,” he said. “I have not relied on Russian funds for my businesses and I have been fully transparent in providing all requested information.”

Kushner suggested the investigation was a means of undercutting Trump’s election.

“Donald Trump had a better message and ran a smarter campaign, and that is why he won,” Kushner said. “Suggesting otherwise ridicules those who voted for him.”

Kushner said he remained committed to his work, citing among his many assignments bringing peace to the Middle East.

“I am so grateful for the opportunity to work on important matters such as Middle East peace and reinvigorating America’s innovative spirit,” he said.