In apparent de-escalation, Abbas calls for return to prayer at Al-Aqsa mosque 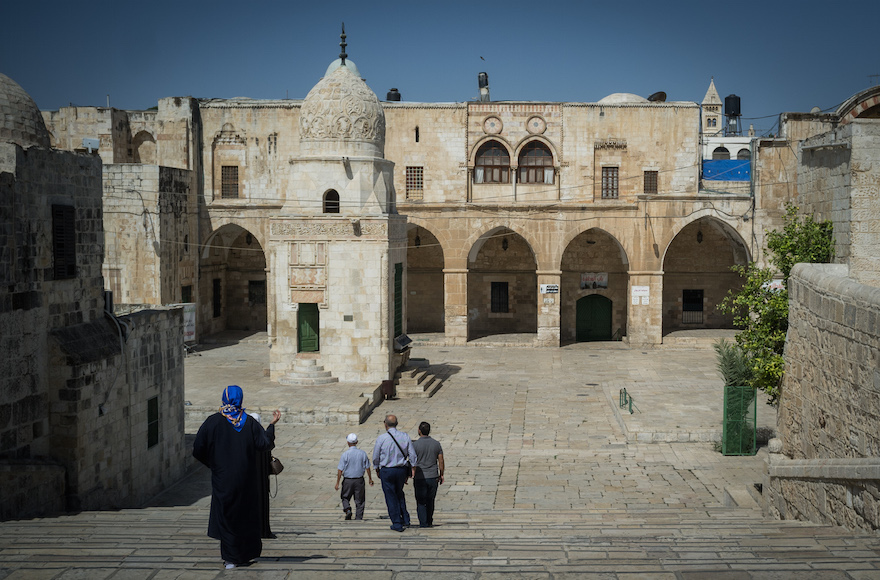 (JTA) — Palestinian officials called on worshippers to return to the Al-Aqsa mosque in Jerusalem in a move seen as a de-escalation of a Muslim-Israeli dispute over the site.

Mahmoud Abbas, the president of the Palestinian Authority, on Thursday said prayers should be resumed at the mosque, which is situated in the compound known to Jews as the Temple Mount and to Muslims as Haram Al Sharif, the Maan news agency reported.

The statement followed Israel’s dismantling starting Tuesday of metal detectors and other security measures it put in place in response to the slaying of two police officers by three Arab-Israeli terrorists outside the mosque on July 14. Palestinian leaders and religious figures called for worshippers to stay away and put up “popular resistance” – code for violent confrontations and terrorist attacks.

Several Palestinians died in clashes with Israeli troops during riots in the West Bank.

Three Israelis were murdered on July 21 in the West Bank settlement of Halamish by a Palestinian terrorist who said he was avenging Israeli actions at Al-Aqsa. In Jordan, a security guard of the Israeli Embassy in Amman killed two people, including the 17-year-old who stabbed him, in an altercation that the Israeli Foreign Ministry said was the result of an attempted terrorist attack but which Jordanian authorities said was a dispute between the guard and a carpenter. The Jordanian attacker and a bystander were killed.

The incident led to a brief siege of the embassy, where the guard resisted calls to surrender himself for questioning by Jordanian police. Embassy staff have diplomatic immunity. The dispute with Jordan was resolved but the embassy staff, including the ambassador, have not returned following their hasty evacuation at the end of the 30-hour standoff over the weekend.

The leaders of Jordan, Turkey and Egypt, in addition to other Muslim countries, strongly urged Israel to dismantle the metal detectors.

On Wednesday, thousands of people attended the funerals in the Arab-Israeli city of Umm al-Fahm of the three terrorists who killed police officers outside the Temple Mount. There were chants about them being martyrs and hundreds of Palestinian flags were waved, according to Channel 2.

The crowd also chanted, “In fire and with blood we will redeem you, Al-Aqsa.”