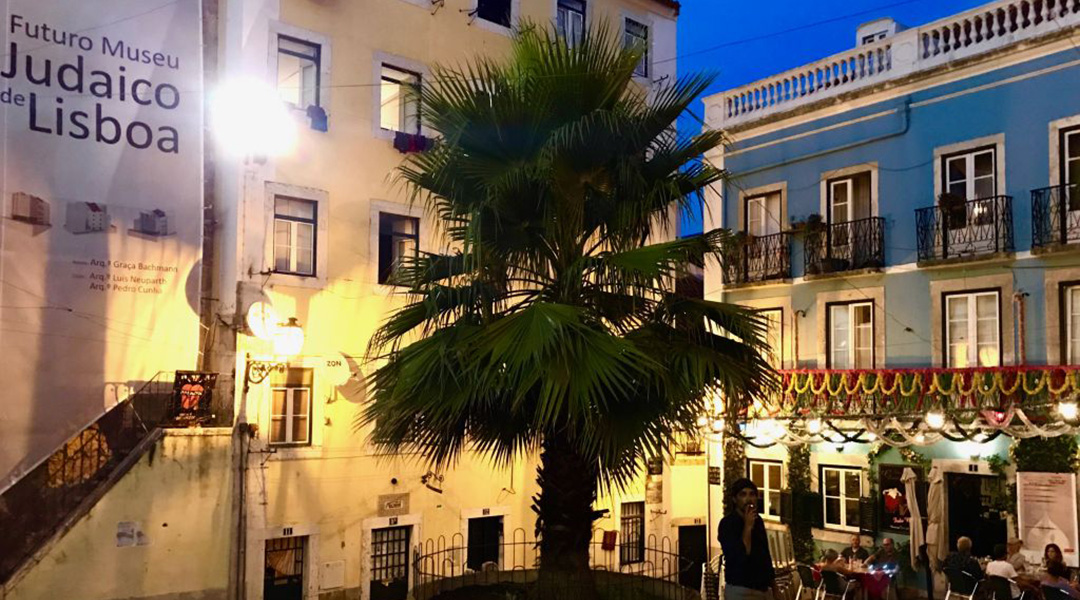 In the ancient Alfama quarter of Lisbon, where steep and narrow cobblestone lanes open to a tilted plaza, a new museum will soon break ground featuring the history and heritage of Portuguese Jews.

The Jewish Museum of Lisbon will be a showcase of Portuguese Jewish life, both of the nation and the Diaspora, says Esther Mucznik, a historian who is the director of the museum. The Alfama site is where a large population of Jews lived before the Inquisition in Portugal.

Explaining the thematic presentation of the museum, Ms. Mucznik says the first will be the La Convivencia, from the 8th to 12th Centuries when, under Moorish rule, Jews, Christians and Moslems lived in harmony. About 20 percent of the population at that time is estimated to have been Jewish, with notable contributions to the civilization.

The second theme, following the Inquisition of 1536 will center on the dispersed Portuguese Jewish communities, in Europe, North Africa and the New World. The last section will be about “the Return”. After 500 years of hiding and banishment, Jews have come back to Portugal.

“Much of what people think about Portuguese and Spanish Jews focuses on the Inquisition,” said Mucznik, whose Eastern European grandfather came to Lisbon in 1913 when he was invited to become the chazan (cantor) of the small community. “What is less known is the contribution that Jews made, before and after the time,” Mucznik said, which is one of the main purposes of the new museum.

With a donation of land from the municipality in Plaza San Miguel, and the generosity of the Paris-based Drahi Foundation, the museum will be an important educational center for locals and visitors interested in Portuguese Jewish heritage.  It is the latest and most comprehensive of Jewish heritage sites in Portugal, the result of growing interest by Portuguese in their own Jewish history.

“There are more people who want to be Jews in Portugal than ever before.”

The centerpiece of Lisbon’s Jewish community is the Sha’are Tikvah synagogue, the first synagogue in Portugal since the 15th Century. Built in 1904, it was founded to serve a community of Sephardic Jews, mainly merchants and their families, who arrived from Morocco, Gibraltar and the Azores after the end of the Inquisition. The building, a Romanesque style with an interior of marble and dark brown wood, is recessed off Herculano boulevard. That’s because 19th Century Portuguese law prohibited non-Catholic religious buildings from facing the street.  Until then, whatever Jewish worship continued in Portugal was done in secret by so-called New Christians.

During World War II the synagogue was a sanctuary for thousands of Jewish refugees who arrived in Lisbon in transit to freedom. Many were saved thanks to Aristides de Sousa Mendes, the Portuguese Consul in Bordeaux, who defied his government and issued thousands of visas to Jewish and other refugees fleeing the Nazis.

Today the community is a mix of Sephardim and Ashkenazi. Lisbon is the main hub of Portugal’s 4000 Jews, with smaller communities in Porto and the once-hidden Jews Belmonte.

A law passed by the Portuguese government a few years ago enables anyone who can prove his or her Portuguese Jewish ancestry to file for citizenship. To date, about 700 people have qualified.

It’s not only Diaspora Jews and Israelis who want connection to their Sephardic roots. Asked about how Jews are viewed In Portugal today, Esther Muczik smiles and says, “there are more people who want to be Jews in Portugal than ever before.”