6 Jewish podcasts that will make you rethink love 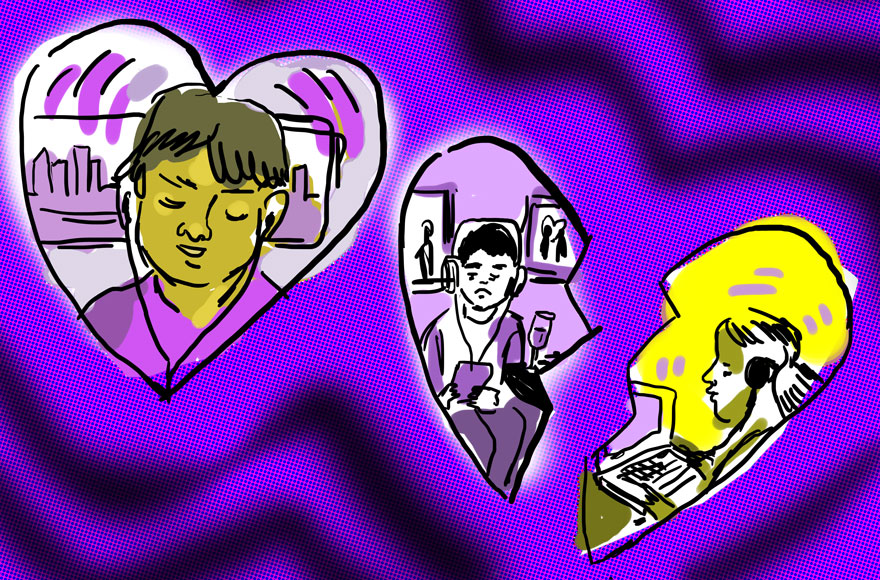 (JTA) — Sunday evening marks the beginning of Tu b’Av, a minor holiday that celebrates the wine harvest. It is considered an auspicious day for matchmaking and thus has been dubbed “The Jewish Day of Love.”

Let’s face it, though: Days of love are not for everyone. Some of us may be happily alone; some recently heartbroken, broken up or widowed. Some couples may be going through a rough patch.

So instead of obsessing about your relationship — or lack thereof — you can spend this Tu b’Av listening to other people’s stories about love. Even those in happy partnerships may learn a thing or two from these six Jewish podcast episodes.

In this episode from a podcast about — you guessed it! — death, sex and money, Gloria Steinem talks with Ellen Burstyn about living alone and deciding not to get married when she was younger. Burstyn also dishes about her three-year marriage, at age 66, to activist David Bale, and about how caring for him as he died helped her come to terms with how she could not care for her ailing mother when she was a child. The intimate conversation between the famed actress and the iconic Jewish feminist is incredibly insightful and moving, and you’ll feel as if you’re sitting in the room with these two larger-than-life women.

2. “Strangers” — The Waxing Virgin, Then and Now

This episode of “Strangers” — a podcast about the amazing things that happen when strangers meet — is about Becca, a Persian Orthodox Jew. An aesthetician, she sees people’s most intimate parts on a daily basis — and she’s also a 30-year-old virgin. Lea Thau, the host of “Strangers,” interviews Becca about how she reconciles her upbringing with her desire for love and partnership and with her job. It’s a gripping and brutally honest story that’s definitely not suitable for the squeamish or young children.

“Why Oh Why” is a podcast all about relationships and technology hosted by the charming Andrea Silenzi, who often features her enchanting grandma, Phyllis. In this episode, Silenzi shares an experiment she did on live radio at WFMU: She had her grandma call into her radio show and go on an “audio date” with her friend Jim Perle, who was in the studio. The two pretended they were at a fancy restaurant; Phyllis even ordered lobster. Afterward, we hear Phyllis spin an enchanting and heart wrenching tale of true love, opera and loss.

4. “This American Life” — Infidelity
This episode of the iconic radio program hosted by Ira Glass is all about infidelity. Not every story in the episode is Jewish, but it features an evocative short story from the Israeli writer Etgar Keret about the aftermath of an affair called “The Man Who Knew What I Was About To Say.” It also includes a chapter from Jewish writer Dani Shapiro’s memoir, “Slow Motion,” about her own destructive affair with a married man.

A nice Jewish girl from a Conservadox family in New York finds love in Alaska. But when the couple’s sixth child is born with Down syndrome, things become complicated. Their journey to build a home for their child takes the family from Fairbanks to the Israeli city Safed, and from casual observance to Orthodoxy. This episode of the Israeli podcast will make you reconsider so much about love, from the unconditional love mothers have for their children to the romantic lives of those with Down syndrome. This is a wonderfully spun tale that at times is unbelievable — but trust me, you will not regret taking this journey.

Esther Perel is a rock star psychotherapist. The Belgian daughter of Holocaust survivors has a degree from Hebrew University, a viral TED talk about sex in long-term relationships and a best-selling book, “Mating in Captivity.” But what’s really revolutionary — and revelatory — is her approach to therapy: Perel meets with couples in crisis for a one-time, three-hour session; each session is recorded and edited into a podcast of 30 to 50 minutes. Listening to the sessions will teach you so much about relationships and how to make them work.

Perel’s podcast episodes are available for purchase on Audible, but before you commit, you can listen to this incredible session in which Perel tries to help a wife salvage her marriage to a husband who had cheated on her for 20 years (he’s repentant). It’s a teachable moment for anyone who is or hopes to be in a relationship.