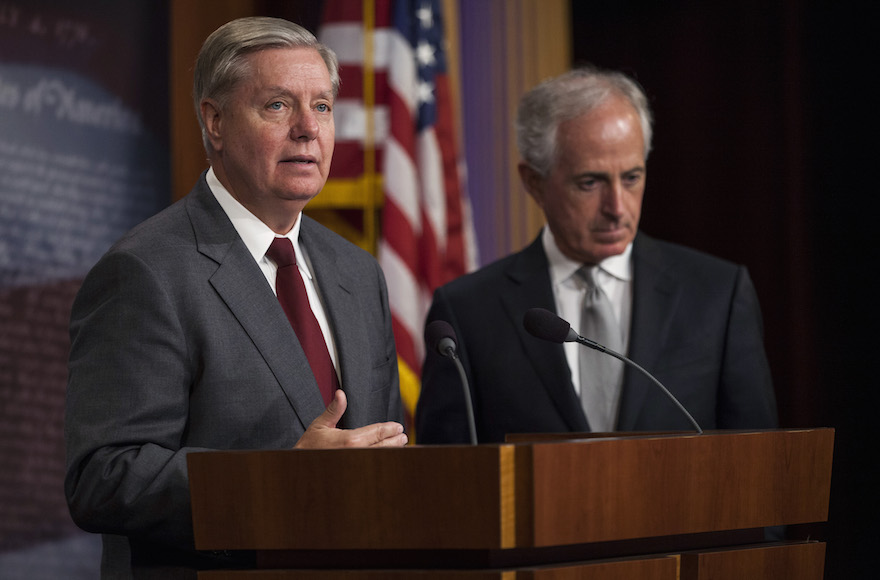 WASHINGTON (JTA) — A key Senate panel has advanced a bill that would reduce U.S. payments to the Palestinian Authority if it continues to pay subsidies to the families of Palestinians jailed for or killed in attacks on Israelis.

The Taylor Force Act, named for an American who was stabbed to death in a 2016 terrorist attack in Tel Aviv, was approved Thursday by the Senate Foreign Relations Committee in a 17-4 vote. It had bipartisan support after being softened to attract backing from Democrats as well as centrist pro-Israel groups.

The American Israel Public Affairs Committee, which endorsed the bill this week following its modifications, praised the passage and urged the full Senate to follow suit.

“The legislation does not affect U.S. funding for security cooperation, nor does it cut humanitarian programs if the U.S. government can certify that the PA is taking credible steps to end violence against Israelis and American,” AIPAC said in a statement.

The Palestine Liberation Organization said the bill would undercut efforts by the Palestinian Authority to tamp down extremism among Palestinians.

“President [Mahmoud] Abbas is committed to a final political settlement and to nonviolence, including building national institutions, maintaining security and stability, and fighting terrorism in the region,” said the statement by the PLO envoy to Washington, Husam Zomlot. “The bill provides fuel for violent extremists who seek to expand into our backyard.”

Israel’s ambassador to Washington, Ron Dermer, had said at a Christians United for Israel Conference last month that Israel did not oppose the bill. (CUFI activists, in their thousands, lobbied for the bill.) However, Israeli security officials reportedly had been concerned that gutting assistance to the Palestinian Authority could destabilize the West Bank, a factor that kept Democrats and AIPAC from backing the bill’s earlier incarnation.

The more restrictive version could conceivably have cut up to $300 million in U.S. aid to the Palestinians; it’s not clear yet how much may be cut under this version. Both versions left in place about $60 million that goes directly to funding Palestinian security forces.

Also praising passage was the Orthodox Union, which had lobbied for the measure since the original version was introduced earlier this year by Sen. Lindsey Graham, R-S.C. It thanked the committee chairman, Sen. Bob Corker, R-Tenn. and its top Democrat, Sen. Ben Cardin, D-Md., for advancing the bill; Cardin had resisted full endorsement until the changes were made.

The O.U. said the bill was “long overdue” and the committee took a “significant step toward thwarting Palestinian terrorism.”

Dovish pro-Israel groups were split on the bill. The Israel Policy Forum in a statement backed the revised version, saying it made a “common sense distinction … between aid that directly benefits the P.A. and aid that supports ordinary Palestinians.”

J Street praised the changes in the bill moderating its reach but expressed concerns.

“The bill’s language is vague in places, making it unclear as to whether this vital assistance would continue depending on how narrowly the language is interpreted by the current U.S. administration or by future administrations,” the liberal Israel lobby said in a statement.

Nitsana Darshan-Leitner, an attorney who represents victims of terror, also complained — from a different perspective — about the bill’s vagueness. She was concerned that too much funding, in the name of preserving humanitarian assistance, would be left to the discretion of State Department officials, and that the bill did not account for the possibility that the P.A. might still offer the payments through a front group.

It’s possible, said Darshan-Leitner, who is with the Israel Law Center/Shurat HaDin, that “we will not achieve the goal of the act, which was to prevent the Palestinian Authority from paying terrorists and their families.”