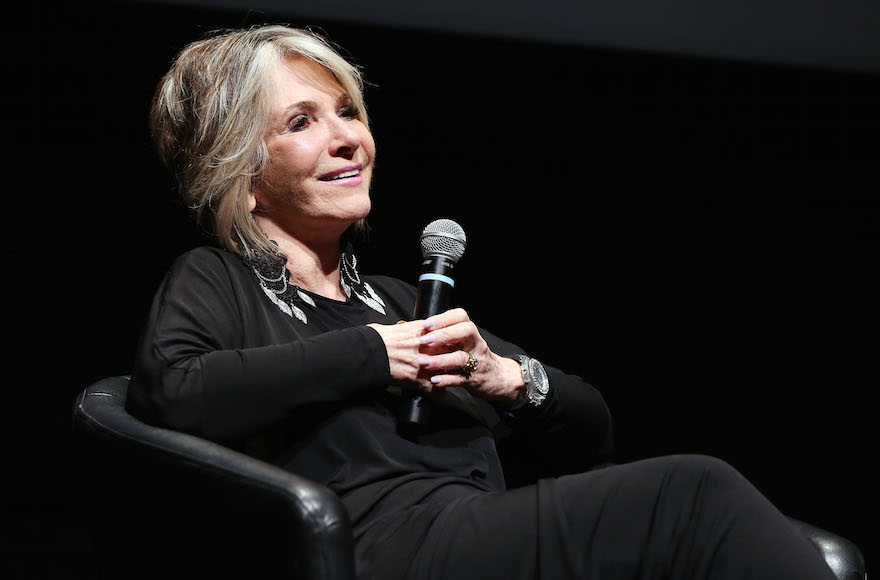 (JTA) — Sheila Nevins may not be a household name, but she is a legend in the documentary film world.

Since she too over HBO’s documentary division in 1979, the network’s documentaries have won 26 Academy Awards. In that same period, as a producer, she has won 32 Primetime Emmy Awards and 34 News and Documentary Emmy Awards.

Along the way, Nevins has worked on plenty of projects with Jewish themes, touching on subjects that range from Daniel Pearl to the Holocaust. Some of these, Nevins told JTA, influenced her beyond the professional realm, helping her connect with her Jewish identity in a way that her mostly secular upbringing did not.

“I feel Jewish and I feel proud of it, and I feel separated from it simultaneously,” said Nevins, who grew up in New York. “I wish that I could go back again and go to the Sunday school with all those cute boys my mother wouldn’t let me go to.”

Nevins has been an executive producer or producer on more than 1,000 films, and in May she published her first book, “You Don’t Look Your Age … and Other Fairy Tales.” (She’s 78, by the way, but you’d never know it — she looks and sounds much younger, due in part to multiple cosmetic procedures. “I have enough Botox in me to detonate Iran,” the wry filmmaker told the Hollywood Reporter in April.)

Nevins candidly addresses this and more in what she calls her “eclectic memoir.” The book consists of stories — some true (one about a boyfriend whose mom didn’t like her because she was Jewish), some slightly altered (one, based on people she had met, about an elderly couple who sleep in separate rooms) and others that are complete fiction (those are “up to the reader” to figure out, she said).

Writing the book, she said, was similar to creating a documentary.

“In a documentary, you usually shoot 100 [minutes of film] to one [minute in the final product]. So I wouldn’t say that you make it up, but you determine what to include, which is a form of scripting,” Nevins said. “But it’s still true to the character.”

And speaking of characters, thanks to her celebrity-riddled Rolodex, friends such as Meryl Streep, Glenn Close and Lena Dunham lend their voices to the audio version of the book.

Still, film is Nevins’ bread and butter. Here are some of the Jewish-themed films she is most proud of working on — at least partly because they brought out the Jewish New Yorker in her.

“Schmatta” covers the rise and fall of the garment industry in New York. Nevins has a bit of firsthand knowledge of the industry: Some of her family worked in the business, and the summer after she graduated from high school, she took a job as a model for a clothing shop.

“This wasn’t modeling how we think of modeling,” she said. “You put the shawl on, and they’d say, ‘Sheila, come out!’ and someone would be there from Neiman Marcus or some department store. Then they would say, ‘Now turn around, go back and get the Persian lamb one!’”

Working on the film also inspired Nevins to research her great-aunt, one of the dozens of Jewish and Italian women who died in the Triangle Shirtwaist Factory fire of 1911.

“I suddenly felt that I had been an immigrant once, that I was part of this ethnic Jewish culture in New York,” she said.

This film, in which Holocaust survivor Gerda Weissman Klein describes how Nazis tore apart her family during World War II, won an Academy Award for best short documentary. Nevins was especially moved by the fact that Klein could not speak about the horrors of her Holocaust experience in her native Polish — she could only describe it in English, since the language “separated her from the experience,” Nevins said.

Nevins became good friends with Larry Kramer, the Jewish playwright who became one of the 20th century’s fiercest gay rights advocates, while working together on this documentary, which chronicles Kramer’s tumultuous public and private lives. They became close in part because of their Jewishness, she said.

“We have a strange kind of historical ethnic connection, as if were family, like he’s my brother,” she said. “I can’t explain it.”

One of the chapters in “You Don’t Look Your Age” is a poem titled “The Larry Kramer,” dedicated to its eponymous inspiration.

This short film turns the lens on Alfons Heck, a former Nazi who describes his rise to becoming a high-ranking member of the Hitler Youth movement. The Anti-Defamation League called it a “cautionary tale that needs to be seen and discussed by young people everywhere.” Nevins became so friendly with Heck that she invited him to her son’s bar mitzvah several years ago.

At a screening at New York’s Museum of Jewish Heritage of the HBO Holocaust documentary “Night Will Fall” in 2015, Nevins found a book in the museum’s library about grandparents talking with their grandchildren about the numbers tattooed on their arms. She thought the idea would make a great film — especially in an era in which children are exposed to tragedies around the world on social media without context or explanation.

Nevins has high praise for the current version of the short film, saying it confidently walks the line between being informative and too disturbing for children.

“It’s important that [children today] know that they, too, are a part of this history of violence and denial,” she said.