Twitter failed to delete some anti-Semitic posts. So this satirist spray-painted them on its German headquarters. 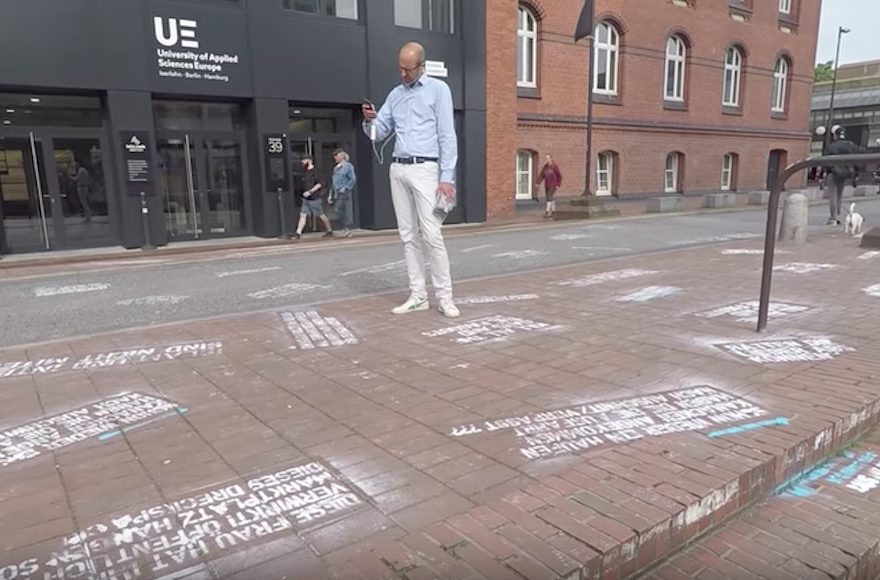 BERLIN (JTA) — The Berlin-based creator of the viral Yolocaust website spray-painted the German headquarters of Twitter with anti-Semitic posts that the social network failed to delete when he reported them.

“I reported about 300 hate tweets. Twitter didn’t delete  ’em, so I sprayed them in front of their office,” he wrote.

His tweet has been retweeted more than 7 million times.

The tweets included “Let’s get together and gas Jews again … the old days were nice.” And “Here comes another horde of migrants. Did they miss the stop at Auschwitz?”

I reported about 300 hate tweets. Twitter didn't delete 'em, so I sprayed them in front of their office #HEYTWITTER https://t.co/wPqiwaxd7J

Shapira gained notoriety worldwide in January when he created his Yolocaust website, which was meant to shame people who posted cutesy photos of themselves posing at Berlin’s Holocaust memorial. He removed the postings upon request of the outed and apologetic subjects.

Shapira’s video documenting the latest action can be seen on Bento, a hip, Hamburg-based offshoot of Spiegel magazine. In the video, Shapira says he reported some 450 violent hate comments to Twitter and Facebook. Facebook removed about 80 percent of the comments he reported. But Twitter answered only nine of his 300 complaints, in each case noting that the tweets did not violate company policy.

“If Twitter is going to force me to see these things, then they also have to face it,” he said. According to Bento, Twitter has not responded to the artistic intervention.

In June, Germany’s parliament passed a law — applauded by local Jewish leaders — designed to curb hate speech and libel on social networks. It requires internet platforms like Facebook, Twitter and YouTube to remove material with obviously illegal content and fake defamatory “news” within 24 hours of its having been reported. Failure to do so can lead to heavy fines, reportedly of up to 50 million euros, or about $56 million.