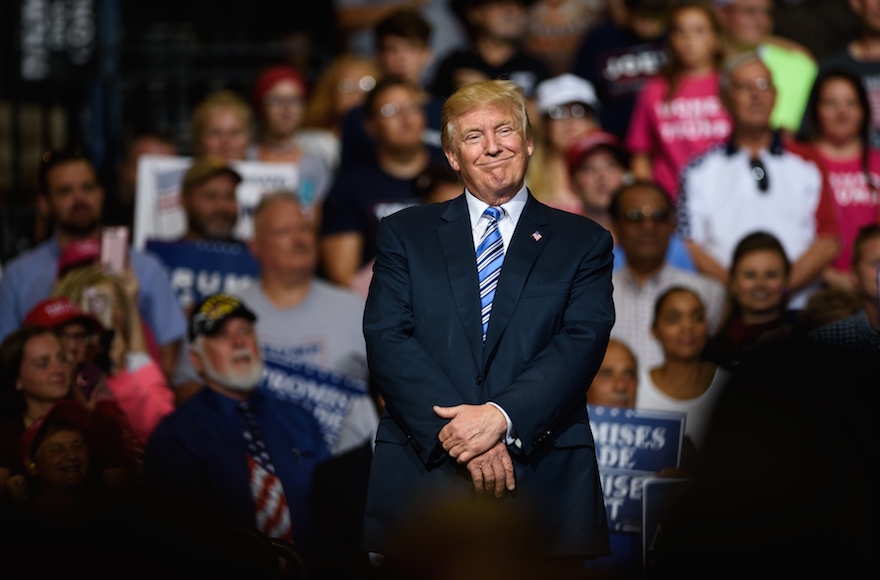 (JTA) — On Monday afternoon, President Donald Trump tweeted something that surprised me:

“I think Senator Blumenthal should take a nice long vacation in Vietnam, where he lied about his service, so he can at least say he was there.”

There was nothing unusual about his target or his bullying. Earlier in the day, Trump had sent off a flurry of tweets about Richard Blumenthal, the Connecticut Democrat who famously suggested that he served in Vietnam when he did his Marine Reserve duty stateside. That morning, apparently angry after Blumenthal criticized him on CNN, Trump called Blumenthal a “liar,” a “baby” and a “con artist.”

What is notable about the afternoon tweet is that it actually takes the form of a joke. Because for all of his skills as an entertainer and a showman, Trump is no comedian. He gets laughs, yes. Some are intentional — crowds at his rallies cackle and whoop appreciatively when he rolls out his stock phrases.

His style of rhetoric — raise an indignation, lance it with insults, welcome the audience’s approval — owes a debt to certain comedians (New Yorker writer David Denby hears in Trump “uncanny echoes of Alan King and Don Rickles, the New York-born Jewish comics of the sixties and seventies”).

But wit? Wordplay? Misdirection? Self-deprecation? None of these are in the Trump arsenal.

His last Blumenthal tweet isn’t exactly ready for late night, but it’s got some comedic structure, including a set-up (“I think Senator Blumenthal should take a nice long vacation in Vietnam”) and a punch line (“so he can at least say he was there”). Ba-dump-bump. He could do without the unnecessary middle phrase: “where he lied about his service.” (It’s the difference between “Take my wife — please” and “Take my wife — with whom I do not get along — please.”)

Otherwise, you’d be hard-pressed to find an example of Trumpian wit. Even his insult “humor” is heavy-handed and obvious: “Crooked Hillary.” “Little Marco.” “Lyin’ Ted.”

Consider the laugh lines during his cringe-inducing speech at the Boy Scout Jamboree. Turning to Tom Price, his secretary for health and human services, Trump tried some joke-like banter in referring to the upcoming vote in the Senate on repealing Obamacare. “By the way, are you going to get the votes? He better get them. He better get them. Oh, he better. Otherwise I’ll say, ‘Tom, you’re fired.'”

That’s not a joke, that’s a catchphrase — Trump’s “Git-R-Done!” or “I’m a wild and crazy guy!” And Trump’s delivery, with one too many “he betters,” made him sound more ominous than jocular. (He ended the sequence by saying, “I’ll get somebody” — presumably a replacement for Price.)

In the background, Price and Secretary of Energy Rick Perry can be seen laughing, but with the strained, please-God-not-me smiles of the mobsters in “The Untouchables” as Robert De Niro as Al Capone gives his after-dinner speech while gripping a baseball bat.

I don’t doubt that Trump himself thinks he’s being funny. I even believe his spokeswoman, Sarah Huckabee Sanders, was telling the truth when she said the president had been “making a joke” when, in a talk to police officers on Long Island, he suggested that they shouldn’t be “too nice” to suspects. Trump’s statement even sounds like a joke: “Like when you guys put somebody in the car, and you’re protecting their head, you know, the way you put your hand over [their head], I said, ‘You can take the hand away, OK?’”

But one test of a funny person is whether he understands both his audience and the occasion. Maybe a comic at a club could get away with a joke about roughing up prisoners, but not a politician, and certainly not a president, and certainly not a president when allegations of police brutality are a current and searing topic of debate. Trump’s cop joke wasn’t just too soon — it was not ever.

Trump also has the inept comedian’s habit of ruining a joke by pressing too hard, like when he spoke to the Republican Jewish Coalition back in 2015.

“I’m a negotiator like you folks, we are negotiators,” Trump told the presumably moneyed audience. When that line — not a joke exactly — drew some appreciative laughter, he milked it: “Is there anybody that doesn’t renegotiate deals in this room? This room negotiates them — perhaps more than any other room I’ve ever spoken in.”

Hello? Hello? Is this thing on?

Trump’s nadir as a joke teller came during the campaign, at the Al Smith Dinner in October 2016. Trump starts out with a pretty good one-liner about his opponent: “I wasn’t really sure if Hillary was going to be here tonight because, I guess, you didn’t send her invitation by email.” Pointed, topical, cutting but not vicious. In other words, it didn’t sound like Trump.

It’s when he started to sound more like himself —  when he appeared to go off script — that the bipartisan audience began booing.

“We’ve learned so much from WikiLeaks,” Trump said next. “For example, Hillary believes that it is vital to deceive the people by having one public policy and a totally different policy in private.”

That’s not a joke. That’s a description of a joke, like, “It was so hot today that I needed a metaphor to describe it.” When the audience booed, Trump said, “That’s OK, I don’t know who they’re angry at, Hillary, you or I. For example, here she is tonight, in public, pretending not to hate Catholics.”

Too often Trump’s speeches remind me of a wedding toast that goes off the rails. He’s the best man or father-in-law who feels he has to get some jokes in there, and whose lack of comedic talent is matched only by his unwavering confidence.

Al Franken, the comedian turned junior senator of the Great State of Minnesota, was asked recently if Donald Trump is funny.

“I don’t think he’s funny at all,” said Franken, a Democrat, and I don’t think he was just being partisan. Asked by Stephen Colbert last week if there were any other senators with a sense of humor, Franken mentioned Republicans Jim DeMint and Lindsey Graham of South Carolina.

What’s striking, Franken told the New Yorker’s David Remnick, is that Trump himself is never seen laughing. The president, he said, “is like some fairy tale, where if someone can get the king to laugh they’ll get half the fortune and the daughter.” Someone who can’t enjoy a good joke is not going to tell one either. Franken laughs a lot.

I don’t think it is necessary to have a Comedian in Chief, but Trump’s singular lack of a sense of humor — and seeming inability to laugh at himself — strikes me as a clue to his polarizing presidency. A  good joke or a smart turn of phrase — at your own expense or your opponent’s — has a way of defusing the opposition or lightening a situation. It can welcome an audience into your enterprise even if it isn’t necessarily inclined to agree with you.

Trump’s style of humor, like his policies and all-too-many tweets, plays directly to the people who already agree with — and enjoy — him in the first place. And it reveals a bullying comic’s instinct to own the room by finding an easy target (a reporter with a disability, a woman with a face lift, a frail judge).

Trump reminds me of the alpha male in school who was considered funny (a “pisser,” in my day) mostly because you didn’t dare not laugh at his jokes. In junior high school, it’s the soul of wit to sneak up on a seventh-grader and yank down his sweatpants. It’s the bully’s closer. But it doesn’t make you Winston Churchill or even Don Rickles.

Who knew it could make you president of the United States?