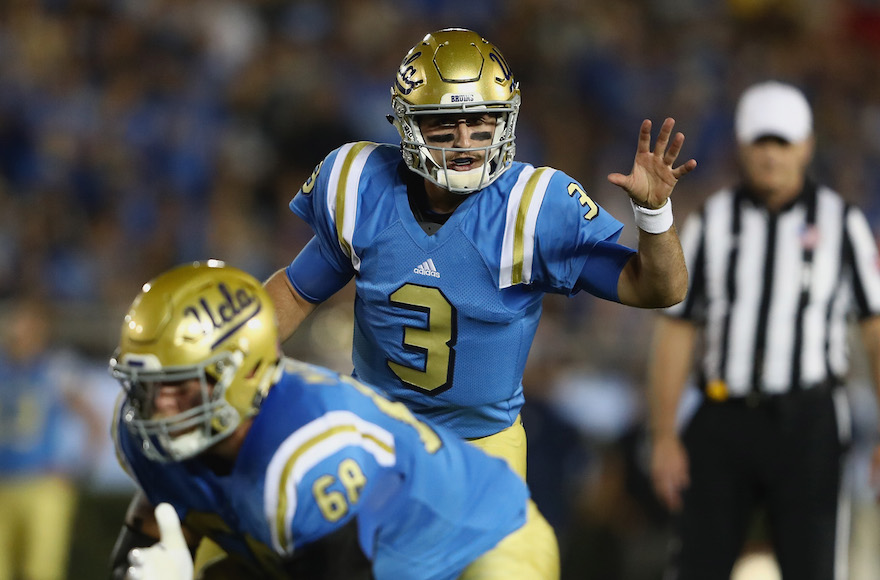 (JTA) — Josh Rosen, UCLA’s starting quarterback and a highly touted NFL prospect, has taken flak before for being outspoken about his views. Last year, he said that college football should be considered a professional sport and wore a hat that said “F— Trump” while golfing on one of Trump’s golf courses.

In an interview with Bleacher Report on Tuesday, Rosen doubled down on his criticism of the college football model, which he believes leaves no time for academic coursework.

“Look, football and school don’t go together,” he said. “They just don’t. Trying to do both is like trying to do two full-time jobs. There are guys who have no business being in school, but they’re here because this is the path to the NFL. There’s no other way. Then there’s the other side that says raise the SAT eligibility requirements. OK, raise the SAT requirement at Alabama and see what kind of team they have. You lose athletes and then the product on the field suffers.”

(For context, the University of Alabama has won the college football championship four times in the past eight years.)

Rosen, 20, an economics major entering his junior year, went on to explain that he wants to get an MBA and create his own business after playing in the NFL.

“When I’m finished with football, I want a seamless transition to life and work and what I’ve dreamed about doing all my life. I want to own the world. Every young person should be able to have that dream and the ability to access it. I don’t think that’s too much to ask,” he said.

Rosen’s comments drew scrutiny from some fellow players, but also praise from sports writers. The NCAA has been harshly criticized for its financial and academic system, which generates billions of dollars of revenue. College athletes are not allowed to make any money from their sports through endorsements or advertisements.

The 6-foot-4 gunslinger is the son of Charles Rosen, a noted Jewish orthopedic surgeon, and Liz Lippincott, who is Quaker (she is the great-great-granddaughter of Joseph Wharton, who founded the Wharton business school at the University of Pennsylvania).

Despite having only played in 20 collegiate games and missing about half of last season with a shoulder injury, Rosen was recently ranked the number seven college prospect by ESPN. In 2015, his freshman year, he threw for 3,670 yards and 23 touchdowns.