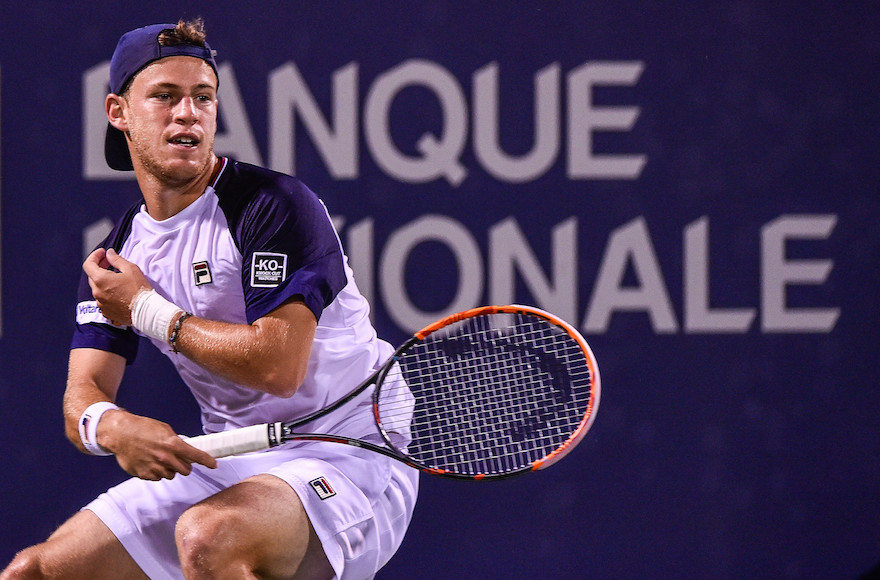 Diego Schwartzman of Argentina hitting a return against Dominic Thiem of Austria during day five of the Rogers Cup in Montreal, Aug. 8, 2017. (Minas Panagiotakis/Getty Images)
Advertisement

(JTA) — Argentine Diego Schwartzman advanced to the quarterfinals of the Rogers Cup tennis tournament in Montreal two days after upsetting Austrian Dominic Thiem, who is currently ranked number seven in the world.

Schwartzman’s win over Thiem was his first over a top-10 player. He is currently ranked number 36 in the world, making him the best male Jewish tennis player on the planet.

Schwartzman, 24, is next set to play the winner of a match between Gregor Dimitrov (ranked 11) and Robin Haase (ranked 52).

Denis Shapovalov, an 18-year-old Canadian who was born in Tel Aviv to a Jewish mother and Christian father, has also shined in the tournament. Currently ranked 143 in the world, Shapovalov upset Argentine Juan Martin del Potro, the former U.S. Open champion currently ranked 31.

Shapovalov will next play Rafael Nadal, the tournament’s number one seed and 10-time French Open winner.