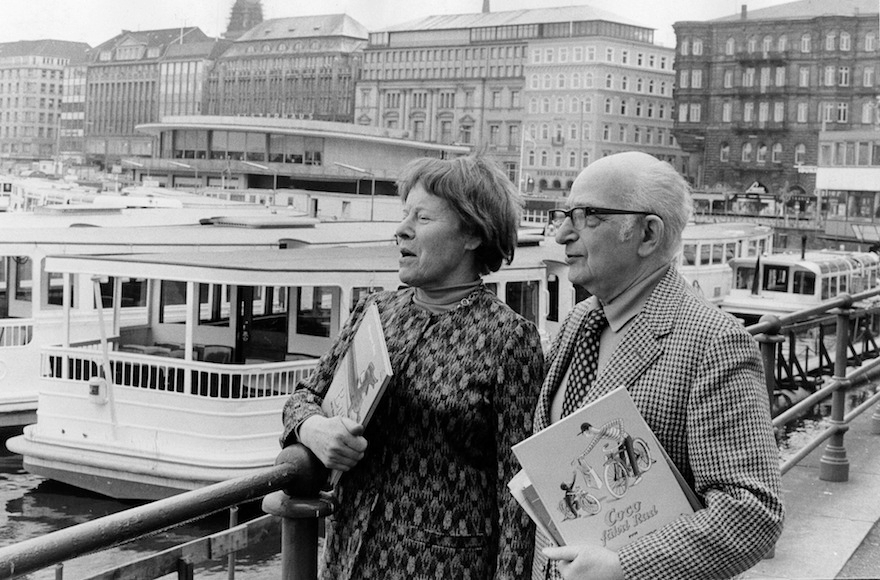 Margret and H. A. Rey, in May, 1973. (Ullstein bild via Getty Images)
Advertisement

(JTA) —  Curious George — that curious little monkey — is beloved by millions of readers around the world. His adventures with the Man With the Yellow Hat impart important life lessons amidst silliness and mayhem.

But many people probably don’t know that the children’s book character was actually born during very dark times. His two Jewish creators, Margret and H.A. Rey, fled the Nazis in 1940 — on homemade bicycles, no less — carrying their unpublished manuscripts with them.

The story of the couple’s daring escape is told in the forthcoming documentary “Monkey Business: The Story of Curious George’s Creators,” which will premiere online and on on-demand platforms on Tuesday, Aug. 15.  At the same time, in a coincidence of timing, the 2005 children’s book “The Journey That Saved Curious George,” will be mailed to 8- to 11-year-olds across the country this month through the PJ Library, a non-profit that champions Jewish-themed children’s books.

No matter what the format, the story of Curious George’s creators is a fascinating one.

Hans Augusto Rey (née Reyersbach) and Margret Waldstein first met in Hamburg in the 1920s. Margret, who had studied art at the influential Bauhaus school and whose father was a member of the German parliament, left Germany for Brazil in 1935 to escape the rising tide of anti-Semitism. Hans had been working in Rio de Janeiro as a bathtub salesman. The pair, who had met over a decade before in Germany, married that year and moved to Paris.

Hans worked as a cartoon illustrator for a newspaper, and Margret wrote copy. A French publisher was impressed with some of Hans’ animal drawings and suggested they work on a children’s book. Their first work was “Raphael and the Nine Monkeys,” and one of those monkeys would later become George.

By June 1940, the situation in Paris looked grim as Hitler’s troops began to close in. Millions of people flocked to trains heading to the south of the country, and the Reys could not get a ticket.

They didn’t own a car, so they decided to flee by bike, as Louise Borden explains in “The Journey That Saved Curious George.” The only problem: They couldn’t find a bike anywhere, either.

Somehow, Hans did something that sounds like a plot point in a children’s fantasy book: He made two bikes that night using spare parts. That incredible act likely saved their lives, as well as the future of the monkey that would become Curious George.

Before their escape, Margret rounded up all of their unpublished children’s book manuscripts, including one titled “Fifi: The Adventures of a Monkey.” The couple biked out of the city 48 hours before the Germans occupied Paris, and slept in barns and restaurants on their journey out of France.

As if in return for being saved, the curious little monkey character helped saved the Reys. As “Monkey Business” director Ema Ryan Yamazaki documents, whenever they were stopped at checkpoints during their escape, the couple brandished the manuscripts and illustrations to prove that they were not dangerous.

They eventually made their way to Lisbon, then back to Brazil, then to New York. Fifi became George, and in 1941, Houghton Mifflin published the first “Curious George” book. Since then over 75 million “Curious George” books have been sold and the series has been translated into 19 languages. (He’s also the star of an animated PBS program for kids that premiered in 2006.)

Yamazaki, who grew up partially in the U.S. and partially in Japan, said she was inspired by the Reys’ story of immigrant success.

“With a deepening refugee crisis and inflamed anti-immigrant rhetoric across the globe, the Reys’ story has become unexpectedly more relevant in the two years I have been making the documentary,” she wrote last year. “The Reys’ refugee story has a happy ending, and represents the American dream at its best.”