This Holocaust monument in Belarus is haunting — and subversive 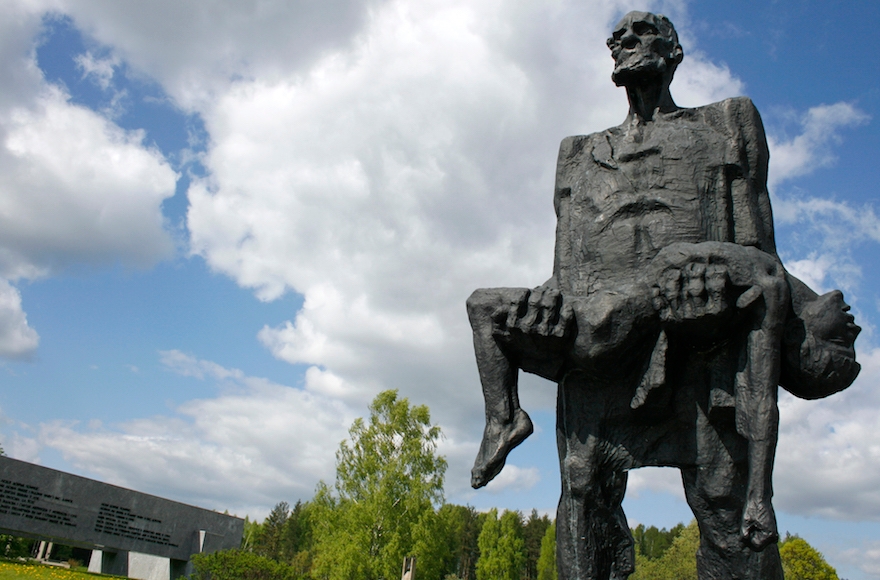 KHATYN, Belarus (JTA) — Even by Soviet standards, the massive memorial complex near Minsk to the victims of Nazi atrocities stands out for its immense scale and ambition.

Spread across half a million square feet — roughly the size of 10 football fields — the haunting Khatyn Memorial is essentially a graveyard not for people, but for entire villages wiped out by the Nazis in Belarus.  Byelorussia, as it was then known, was one of the few places in Europe where German brutality toward non-Jews matched their anti-Semitic savagery.

The memorial features soil from each of the 186 villages razed by the Nazis in Belarus — 3 million civilians here were killed by Nazis, including 800,000 Jews — and a symbolic tombstone for each village. Bell towers toll here every hour for each of the houses that the German and Ukrainian troops burned in the former village of Khatyn in the massacre of March 22, 1943. And there’s a bleak, black marble monument called the Wall of Sorrow.

The monument “was revolutionary,” said Chaim Chesler, founder of the Limmud FSU Jewish learning group. “There is nothing quite like it anywhere in the former Soviet Union, not in terms of scale, design and concept.” Limmud FSU regularly brings visitors to the monument.

But the Khatyn monument is unusual not only for its size and the scale of the tragedy it commemorates.

The complex’s chief architect was Leonid Levin, an uncommon honor for a Jew at a time of virulent state anti-Semitism in the Soviet Union. It also features a rare Soviet depiction of individual, unglorified grief and suffering by ordinary people: a statue called “The Unbowed Man.”

Designed by sculptor Sergei Selikhanov, the work depicts Yuzif Kaminsky, the only villager who survived the Nazi massacre in Khatyn, cradling the corpse of his dead son, Adam. The Kaminsky family wasn’t Jewish, but the father’s grief stands for all the suffering inflicted on the region — and in stark contrast to typical Soviet-era statues of defiant soldiers or a glorious Mother Russia.

“The inclusion of such work was revolutionary when my father decided on it,” said Levin’s daughter, Galina Levina. “Architecturally and conceptually, he was decades ahead of his time.” Leonid Levin died in 2014.

The Soviet rulers selected Levin along with two other partners to head the project in 1967. State anti-Semitism reached new heights that year with Israel’s victory in the Six-Day War against Moscow’s Arab allies.

“I think it was a recognition of Leonid Levin’s excellence, and a realization that he was the best man for the job,” she said.

In 1970, Levin won the prestigious Lenin Award, the highest civil distinction of excellence conferred by the Soviet Union, for his work on Khatyn. He became one of only a handful of Jews who received it.

Chesler of the Limmud FSU group said he found this honor “the most astonishing element of the whole story” of the Khatyn monument. “Clearly, it shows Levin had a great deal of trust from Belarus’ communist rulers, and he used that trust to make something truly great,” Chesler said.

Simon Lewis, a historian and research fellow at the Freie Universität Berlin who has written about the Khatyn monument, told JTA that Levin was probably selected for the job because he was trusted by the government to deliver a monumental, patriotic message.

It didn’t hurt that Levin had nationalist credentials to offset his Jewish ethnicity, Lewis noted.

“He was a very prominent architect before he made Khatyn,” Lewis said of Levin, “and his work shows a commitment to Belarusian nationality in a certain understanding of the term.”

To Lewis, Levin’s case is indicative of how individual Jews who did not engage in Zionism or other activities frowned upon by Moscow could be promoted within the Soviet system, despite its anti-Semitism.

After the fall of communism, Leonid Levin became the head of the Jewish community of Belarus and devoted much of his professional efforts to projects commemorating the Jewish genocide.

The Pietà-like Kaminsky statue, Lewis said, may have been a concession by Moscow to the population of Belarus, in recognition of the scale of atrocities committed against their nation. A third of its population perished.

To Galina Levina, the architect’s daughter, this loss forever binds Jews and Belarusians. “It is even appropriate that the man who designed the main monument for the tragedy of the Belarusian people be Jewish,” she said.

Today, hundreds of thousands of schoolchildren each year visit the Khatyn monument, where the country’s leader, Alexander Lukashenko, delivers speeches on memorial days.

“It is a great honor that my father created the site that is responsible for the main effort of genocide education in the country he loved so much,” she said.

When Levin died, he was working on a memorial for the victims of Maly Trostenets, an extermination camp where the Nazis killed the Jews of Minsk, which he was never able to finish. When Levin passed away, his daughter took over from him. The project was completed in 2015.

She said the monument was not only her father’s last project, but also “the most important” one to him.