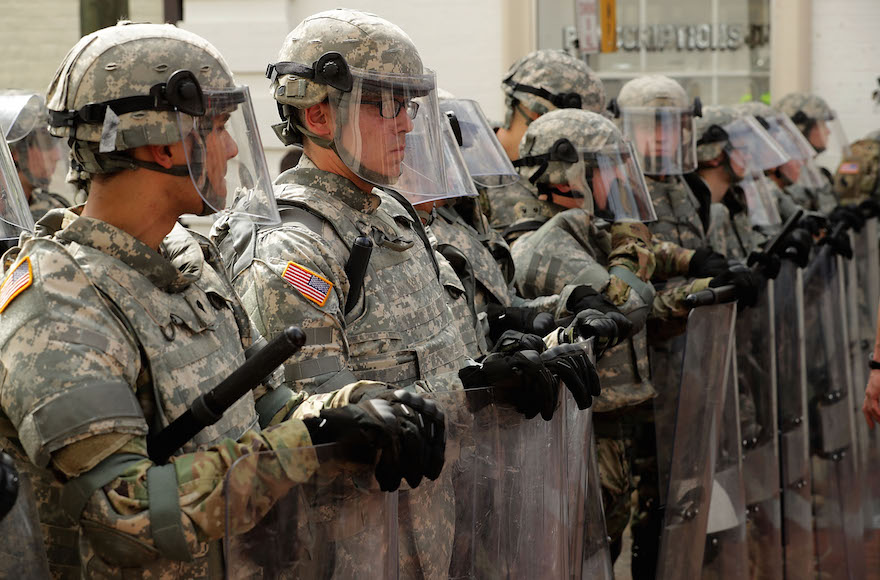 Members of the Virginia National Guard on the pedestrian mall in Charlottesville, Va., following violence at the United the Right rally, Aug. 12, 2017. (Chip Somodevilla/Getty Images)
Advertisement

(JTA) — The Jewish community of Charlottesville, Virginia, hired security guards for the first time in its history ahead of a far-right event that ended with a deadly attack on protesters against racism.

Rabbi Tom Gutherz of Congregation Beth Israel told Haaretz on Sunday that the move was deemed necessary ahead of the “alt-right” rally planned for the city the day before. On Saturday, a 20-year-old white supremacist drove a car into a crowd of counterprotesters, killing a 32-year-old woman, Heather Heyer, and wounding 20 others.

“We had to hire the service of security guards because of the events,” Gutherz told Haaretz. “We’re sad but we had no choice.”

The synagogue held its scheduled activities on Saturday, Gutherz said.

“It was clear we wouldn’t let this intimidate us, these people can’t keep us away from our synagogue,” he said of the far-right activists.

On Sunday, Charlottesville Mayor Michael Signer, who is Jewish, blamed President Donald Trump for some of the hatred on display in his city, where thousands of marchers chanted racist slogans, including about Jews and blacks.

“Look at the campaign he ran,” Signer told CNN about Trump. “Look at the intentional courting, on one hand, of all these white supremacists, white nationalists … and look on the other hand at the repeated failure to step up, condemn, denounce, silence, put to bed all of these different efforts, just like we saw yesterday. This isn’t hard.”

On Saturday, Trump condemned hatred and violence “on many sides” in his remarks, but did not directly single out the white supremacists, whose rally in Charlottesville resulted in the governor, Terry McAuliffe, a Democrat, calling a state of emergency.

Trump has come under bipartisan criticism for failing to explicitly condemn white nationalists, neo-Nazis and other hate groups in brief remarks he gave Saturday from his golf club in New Jersey.

Vice President Mike Pence did issue such a condemnation while speaking to reporters in Cartagena, Colombia.

“We have no tolerance for hate and violence, white supremacists or neo-Nazis or the KKK,” he said.