Pink and Regina Spektor write moving messages about the Charlottesville violence: ‘They will not win’ 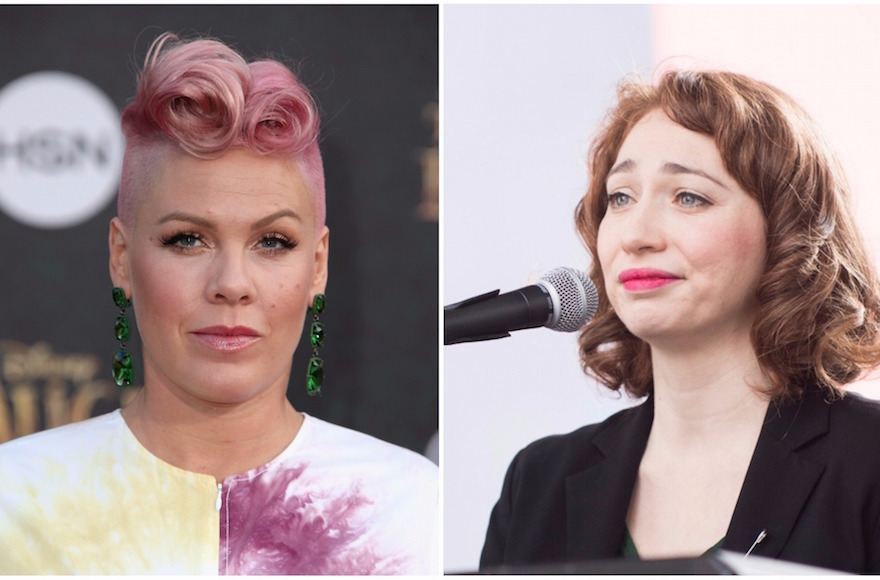 (JTA) — Jewish celebrities are responding to the “Unite the Right” protests that turned violent in Charlottesville, Virginia, over the weekend.

Singers Pink and Regina Spektor both happened to be on tour in Berlin in the aftermath of the Saturday protests, in which hundreds of white supremacists gathered to protest the removal of a Robert E. Lee statue, and one counterprotester was killed in a car ramming attack.

In their responses on social media, both drew comparisons to the dark history of Berlin. Pink, born Alecia Beth Moore and whose mother is Jewish, directly noted her Jewish identity. “It’s incredible to watch neo-nazis march in 2017, while I, a Jewish woman, headline a show in Berlin where these tunnels were built by him,” writes Pink, referring to the tunnels built by Hitler leading to the Waldbühne, the amphitheater where she performed Friday. “I walked through this tunnel to get to [the] stage while people just like him marched in Charlottesville. My heart aches for the amount of hatred in this world.”

It’s incredible to watch neo-nazis march in 2017, while I, a Jewish woman, headline a show in Berlin where these tunnels were built by him, built curvy so he couldn’t be shot in the back. I walked through this tunnel to get to stage while people just like him marched in Charlottesville. My heart aches for the amount of hatred in this world. But in this place, where so many awful things happened once upon a time, here we are together in Berlin. People of all walks of life celebrating together. He didn’t win. Hate didn’t win here and this show, all of us on stage and in the audience together, we are a living testament to that. This city of Berlin is full of beautiful, loving people who accept me for who I am. The world is still full of beautiful people. Hate will not win if we don’t let it. It’s up to each of us to choose love and acceptance. This is an old war that’s already been lost. They will not win. RIP Heather Heyer ?

Regina Spektor referred to her childhood as a  Jewish refugee from the then-Soviet Union in a Facebook post on Monday.

“I am in Berlin where after a dark history, it is illegal to be a Nazi or say hate speech,” she said. “As a refugee, I have promised to protect and fight for my country when I was sworn in as a citizen. I was a teenager then. As I held up my right hand, I never dreamed of the hate speeches and the normalizing of institutionalized prejudice that would be falling over the land in such a short time. The haters coming out of the shadows, and being empowered.”

Heather Heyer, 32, mentioned in Pink’s post, was killed Saturday after being hit by a car driven by James Alex Fields, a 20-year-old said to harbor neo-Nazi beliefs. Another 19 people were injured; Fields, 20, is being held on second-degree murder charges.