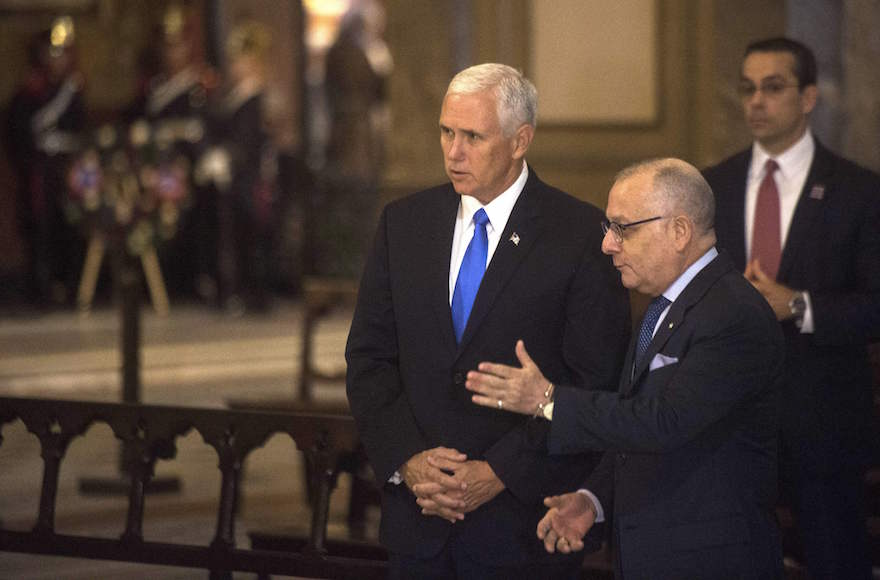 BUENOS AIRES, Argentina (JTA) — Vice President Mike Pence in Argentina commemorated Holocaust victims and those killed in terrorist attacks on Israelis and the Jewish community in 1992 and 1994.

On Tuesday, Pence paid homage to the victims at a memorial in Buenos Aires — his first stop during an official visit to Argentina – in the Metropolitan cathedral.

This year marks the 25th anniversary of the 1992 bombing at the Israeli Embassy in the Argentine capital, which was followed two years later by the AMIA Jewish center bombing — the deadliest terrorist attack in the history of Argentina. The two attacks, which Western intelligence agencies said were organized with Iranian support, claimed the lives of 114 people.

“Earlier today, it was my great honor to visit a memorial to these victims in the Metropolitan chapel, and breathe a prayer and read a verse in their memory,” Pence said.

The vice president landed Sunday in Latin America for a weeklong trip to meet with the leaders of Colombia, Argentina, Chile and Panama.

“The threat of terror still looms across our hemisphere,” Pence said, “and we will stand together to confront it and protect our people from it.”