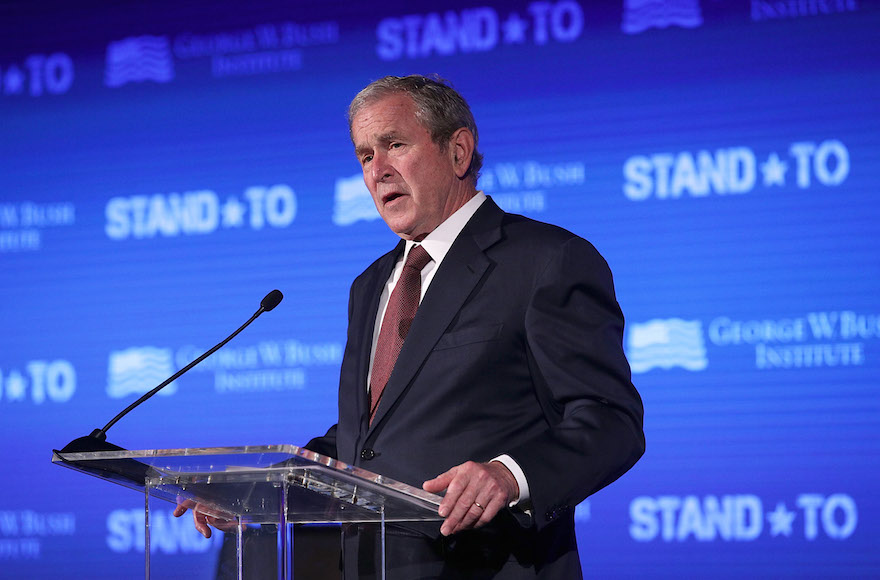 “As we pray for Charlottesville, we are reminded by the fundamental truths recorded by that city’s most prominent citizen in the Declaration of Independence: we are all created equal and endowed by our Creator with unalienable rights,” the Bushes wrote Wednesday, referencing another former president, Thomas Jefferson.

Their statement, issued from their summer residence in Kennebunkport, Maine, comes in the wake of President Donald Trump’s stunning comments on the violence in the southern Virginia city over the weekend.

At a news conference Tuesday in New York, Trump doubled down on his claim that there was “blame on both sides,” equating combative left-wing counterprotesters with the bands of neo-Nazis and white supremacists who were demonstrating against the removal of a statue of Confederate Gen. Robert E. Lee.

“Mr. President, I encourage you to bring us together as a nation after this horrific event in Charlottesville,” he wrote in a statement Wednesday. “Your words are dividing Americans, not healing them.”

The Bushes, both Republicans, have been critical of Trump in the past. In February, George W. Bush raised questions about Trump’s campaign contacts with Russian officials.

Jeb Bush, who lost to Trump in the 2016 Republican presidential primary and has since criticized the president’s social media use, urged him on Twitter and Facebook to “unite the country.”

“This is a time for moral clarity, not ambivalence,” the former Florida governor wrote.

Jewish Republicans were mixed in their reactions to Trump’s Charlottesville statements.

Rep. Lee Zeldin, R-N.Y., the only Jewish Republican in the House, posted a statement on Facebook that criticized counterprotesters whom he claimed were bused in with the intent of committing violence, but he did not equate them with the neo-Nazi protesters.

“These two sides are not equal. They are different,” Zeldin wrote. “I would add though that it is not right to suggest that President Trump is wrong for acknowledging the fact that criminals on both sides showed up for the purpose of being violent.”

Eric Cantor, a former Republican congressman from Virginia, told The New York Times that Trump’s effort to equate the protesters and counterprotesters was “unacceptable.”

The Republican Jewish Coalition did not mention Trump’s comments on Charlottesville in a statement posted on its Facebook page Tuesday afternoon following the news conference.

“We mourn the loss of life at Charlottesville this weekend, and will continue to pray for all those impacted,” the statement said. “Anti-Semitism and all forms of hate are anti-American, anti-Jewish, and antithetical to any sense of decency. We regret that we continue to be faced [with] these issues, but the RJC will never shy away from our role of standing up to racists, fascists, and Nazis.”