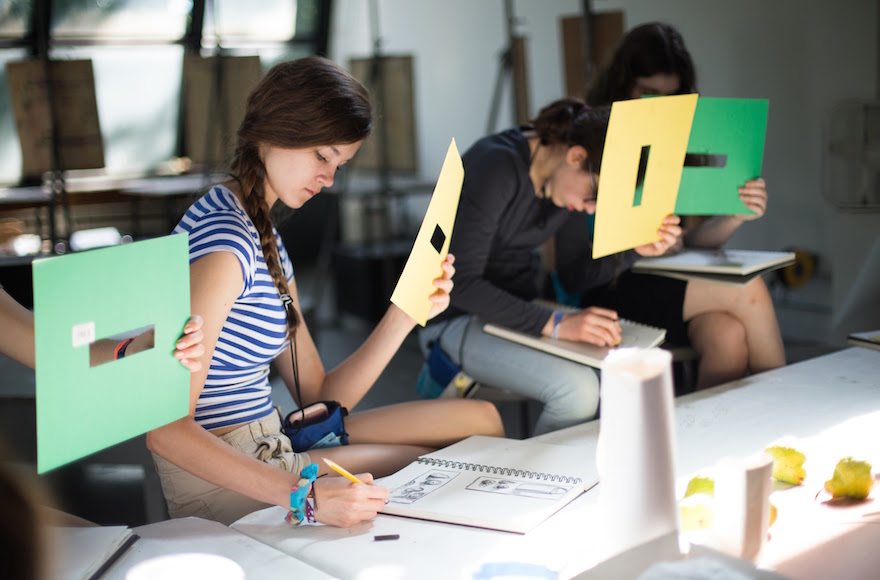 Students in the visual arts track of the Genesis pre-college summer program at Brandeis take part in a drawing exercise on perspective. (Ty Ueda)
Advertisement

WALTHAM, Mass. — Mary Pridgen is an innovation-minded teenager who doesn’t like to waste time.

Volunteering in politics in Biloxi, Mississippi, Pridgen long had been vexed by a recurring problem: how to diplomatically extricate herself from meetings with long-winded people.

So when she arrived at the Brandeis campus this summer for the technology track of a pre-college summer program focused on experiential learning and Jewish community, Pridgen came up with a solution: She designed a pair of shoes that generates a call to your cellphone when you click the heels together, giving you an excuse to leave.

It was one of the things that Pridgen, 15, said she loved about the Genesis program, which draws high school students from around the world for two- or four-week mini-courses ranging from culinary art and anthropology to science and social entrepreneurship – all with a Jewish lens.

(I wanted to continue my conversation with Pridgen, but I was worried her phone was going to ring.)

Experts in the field teach the courses. The wearable technology laboratory track was led by Russel Neiss, a software engineer at the Jewish text website Sefaria. Many of the program participants arrived with no coding experience, he said, and in the space of two weeks learned the skills to complete projects like the shoes or a “fairy dress” that lights up when it moves.

The wide range of participants — North Americans, Israelis and Russians, from a smattering of non-Jews to Orthodox Jews and everything in between — means that students are practically guaranteed to be living, eating and “figuring out how to work with people who are radically different,” said Rabbi Charlie Schwartz, the Genesis program’s director and one of Brandeis’ Jewish chaplains. With about 40 percent of participants from overseas, the conversations that the students have with each other often are radically different from what they are used to at home, he noted.

“Each course integrates Jewish content in some way,” Schwartz said. “On the theater track, participants studied a Jewish text through the lens of an artistic medium. This year it was the Book of Jonah. On our gender and sexuality track, participants talked with each about not just how gender is constructed in society, but also in Jewish tradition. We place a big emphasis on building pluralistic, dynamic communities.”

This summer, about 30 percent of the program’s participants were of Russian extraction, including students who came from Moscow, Kiev, North America and Israel. They collaborated with peers from Israel and North America in building and programming wearable technology – or, in the culinary art and anthropology track, debating whether latkes or hamentaschen are the quintessential Jewish food.

One student argued not just in favor of latkes, but a particular kind of potato pancake: “Belarussian draniki” of the sort her family eats with sour cream and milk every Sunday morning. Making her case, she and her teammates noted that latkes have more Google search results than hamentaschen and a longer entry in Gil Marks’ Encyclopedia of Jewish Food, and that Hanukkah is more widely celebrated than Purim. The latke, unlike hamentaschen, has even been mentioned in a U.S. Supreme Court case, County of Allegheny v. American Civil Liberties Union.

Liz Alpern and Jeffrey Yoskowitz, cookbook authors and co-founders of the popular Gefilteria, a trendy Brooklyn food company that serves up classic Jewish dishes with a modern twist, provided guidance. Alpern is herself a graduate of the Genesis program. In building their arguments, the students also consulted via email with Brandeis professor Jonathan Sarna, the renowned expert in American Jewish history whose participation in a latke-hamentaschen debate a decade ago is fondly remembered on the Brandeis campus. 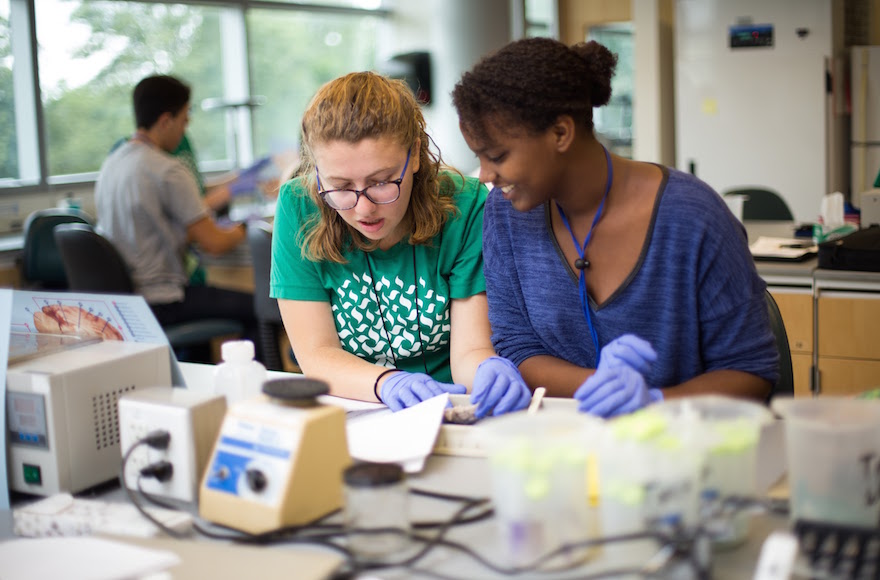 Students work on bench skills in the lab during the Genesis science course. (Ty Ueda)

Regardless of who prevailed in the debate, there was no arguing that the versions cooked and baked by the participants were uniformly and exceedingly tasty. The latkes came in two varieties — one traditional potato, another that incorporated parsnips and turnips. They were accompanied by fresh lox and homemade sour cream, cinnamon applesauce and pickled green beans. The hamentaschen were made with seven different fillings: raspberry, apricot, potato and herb, ricotta and honey, cheese and veggies, nutella and butterscotch.

In a different Brandeis campus building, another group of students was bent over wires, batteries and laptop computers with the same intensity and creative energy that the cooks had gathered around their frying pans. Benjamen Pinsky, a 15-year-old from Toronto who likes magic, designed and built a hat that when tilted asks if you’d like to see a magic trick.

For Brandeis, the pre-college programs — they include an app design boot camp, a global youth summit and other courses focused on Israel studies and arts — are a way to make the Brandeis experience available to younger students, many of whom eventually apply to the university.

The Genesis program was founded in 1997 with a grant from Steven Spielberg’s Righteous Persons Foundation. These days a big supporter is the Genesis Philanthropy Group, which focuses on building Jewish identity among Russian Jews and is known for the annual Genesis Prize, a $1 million award that has been won by Michael Bloomberg and Michael Douglas.

For Neiss, the technology teacher, this was his eighth year as an instructor. Neiss, a St. Louis resident, said he looks forward every year to the weeks he spends at Brandeis surrounded by wires and computers and, most of all, “a group of teens really interested in the subject matter who want to be here.”