Was Stephen Bannon good for the Jews? A review 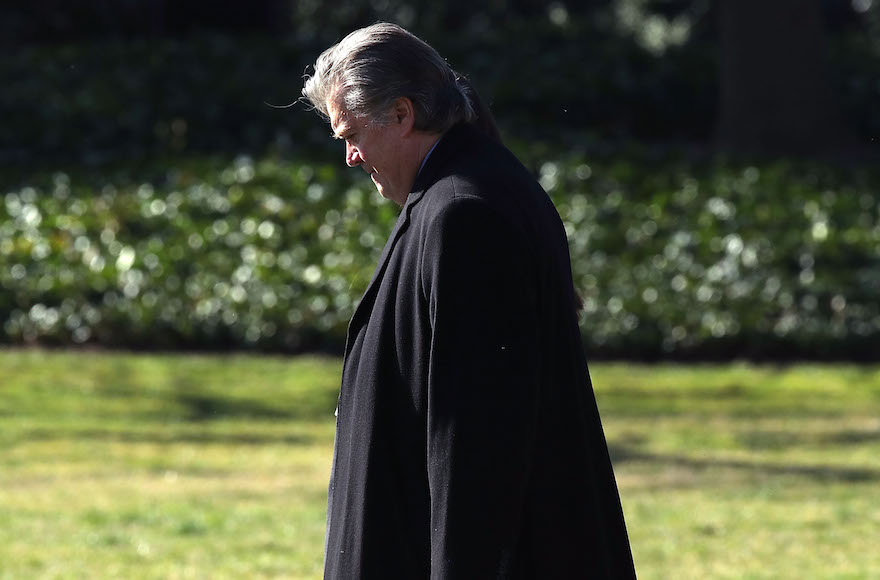 (JTA) — Stephen Bannon, whose advice to President Donald Trump was that “darkness is good,” was thrust out into the light of the sunshiny day enveloping Washington, D.C., on Friday: He is no longer Trump’s strategic adviser.

It’s not clear yet what led to Bannon’s departure. He alone among Trump’s senior advisers favored the president’s decision to blame “many sides” for the violence last weekend when white supremacists descended on Charlottesville, Virginia, a posture that has outraged Americans across the political spectrum. Bannon and Trump’s national security adviser, H.R. McMaster, were always at odds.

Bannon conveys, perhaps unintentionally, the impression that he is manipulating Trump, an impression that Trump is known to hate. And Bannon told the American Prospect this week that there is no military solution to North Korea’s nuclear ambitions, just as Trump and his national security team are ramping up claims that a military option is not off the table.

One thorny issue that kept coming up: Was Bannon, who made gutting the Iran nuclear deal a priority, the Jewish community’s best friend in the White House? Or was the man who embraced conspiracy theories about globalists the most Jewish-hostile White House presence since Richard Nixon stalked its halls?

Breitbart plus: In 2015, under Bannon’s leadership, the site launched Breitbart Jerusalem because Bannon wanted to counter what he sees as media bias against Israel. Breitbart also aggressively covers anti-Semitism in Europe.

Breitbart minus: Bannon has described the news site as “the platform for the ‘alt-right,'” the loose coalition of anti-establishment conservatives who include among their ranks anti-Semites and racists.

Alt-right plus: Bannon, addressing a conference held at the Vatican in 2014, recognized the tendency of the alt-right to attract racists and anti-Semitism, but said he rejected those bigotries and predicted they would “wash away.”

Alt-right minus: Even absent specifying Jews or blacks or other races, the conspiratorial mind-set of the alt-right is uncomfortably redolent of the toxic myths that have led to violence. Bannon is believed to have written a speech by Trump on the eve of his election suggesting that his Democratic rival, Hillary Clinton, was part of an international banking conspiracy. It set Jewish hairs on end. Trump’s final campaign ad, excerpting parts of the speech against a backdrop that include a rogues gallery of “internationalists” who all happened to be Jews, didn’t help.

The agenda plus: Bannon has worked closely with the pro-Israel right, which says he has been particularly aggressive within the White House in advocating for scrapping the Obama administration deal they most revile, trading sanctions relief for Iran’s rollback of its nuclear program. Undoing the Iran deal featured on Bannon’s famous whiteboard, where he checked off Trump’s “to-do” list. (The deal has yet to be undone, but not for lack of trying by Bannon.) Whatever one thinks of the Iran deal, Bannon’s opposition to it comported closely with the current Israeli government, whose officials appreciated his advocacy.

The agenda minus: Trump’s “America First” outlook, spurred by Bannon and his White House acolytes, has rejected “identity politics.” Bannon believes rejecting “politically correct” views on race helped Trump win the White House, which is why he cheered on Trump this week when the president insisted that “many sides” were responsible for the deadly violence in Charlottesville. This outlook is not new to the Jewish community: It was behind the bizarre Jan. 27 International Holocaust Day declaration that failed to mention that Jews were the victims of the Holocaust.

Shall we invite him to the seder? Bannon and Jewish staff

Watercooler chat plus: Bannon brought into the White House a host of staffers, among them Jewish Breitbart alumni like Julia Hahn, who is a special assistant. He reportedly is close to Ezra Cohen-Watnick, who was the National Security Council staffer responsible for coordination with the intelligence community. McMaster removed Cohen-Watnick from the NSC, reportedly in part because his views on Iran were too hawkish.

Watercooler chat minus: Bannon clashed with Jared Kushner, Trump’s Jewish son-in-law and a senior adviser, reportedly calling him a “globalist” — seen in some quarters (see above) as coded language for Jews. Ditto Trump’s senior economic adviser, Gary Cohn. Breitbart, still believed to be influenced by Bannon, has recently taken to surrounding Cohn’s name with globes in its headlines.

Some of his best friends

The human factor plus: Bannon’s former Jewish staffers at Breitbart swear by him as an understanding boss. Joel Pollak, a former editor in chief at the news site, told NPR that Bannon not only encouraged him to take off Jewish holidays, he would wish him a “Shabbat Shalom” on Friday afternoons.

The human factor minus: One of Bannon’s ex-wives said in a sworn declaration that he made anti-Semitic remarks while they were searching for a private school for their girls. Bannon has denied the claim, although at least one third party has corroborated part of her account.