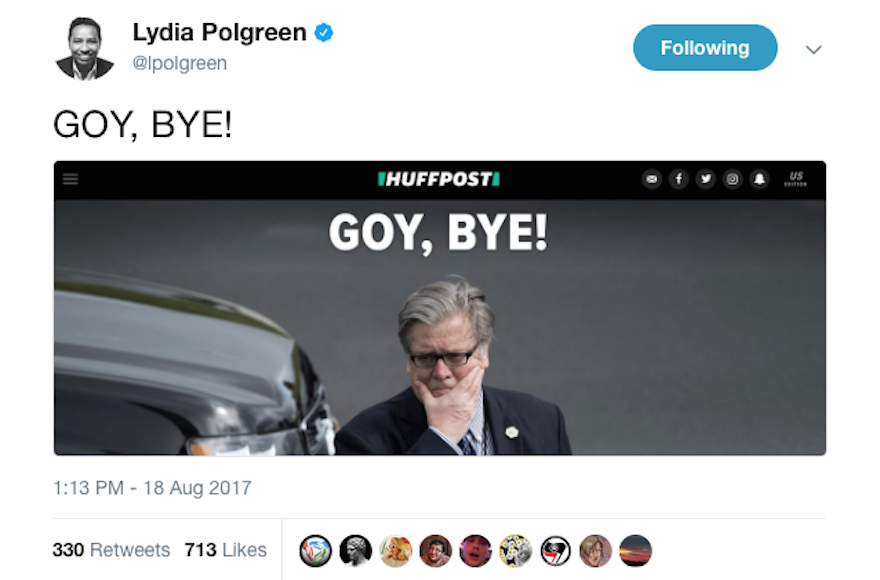 The Huffington Post used the headline "Goy, bye!" on an article about Stephen Bannon leaving his position as White House chief strategist. (Screenshot from Twitter)
Advertisement

“Goy, bye!” read the homepage of the news site. The unusual choice of words was a combination of the Yiddish word for a non-Jew and a lyric in Beyonce’s “Lemonade” song in which the singer dismisses a lover with “boy, bye.”

That combination struck a bad note with several prominent Jews who called out HuffPost Editor-in-Chief Lydia Polgreen on Twitter.

Glad you changed the headline.Not sure your intent, but strikes me as poor taste at best, very offensive at worst.

ADL’s national director, Jonathan Greenblatt, said the headline was “poor taste at best, very offensive at worst,” while Julia Ioffe, a reporter at the Atlantic, told Polgreen she wished “you hadn’t gone with this headline.”

I love your work, but wish you hadn't gone with this headline.

In a series of tweets, Polgreen explained the headline “was intended to be a mashup tribute to Yiddish and Beyonce. Any other interpretation was completely unintended.”

The headline, which has since been changed to “White flight,” likely struck many as particularly distasteful as it seemed to play off of conspiracy theories that Jews control the world. Last weekend, white supremacists and neo-Nazis gathered at a rally in Charlottesville, Virginia, chanting racist and anti-Semitic slogans, including “Jews will not replace us.”

Bannon is the former executive chair of Breitbart News, a site often associated with the “alt-right,” which is a loose far-right movement whose followers traffic variously in white nationalism, anti-immigration sentiment, anti-Semitism and a disdain for “political correctness.”