New York’s Orthodox Jews are expanding into these towns, and some residents aren’t happy 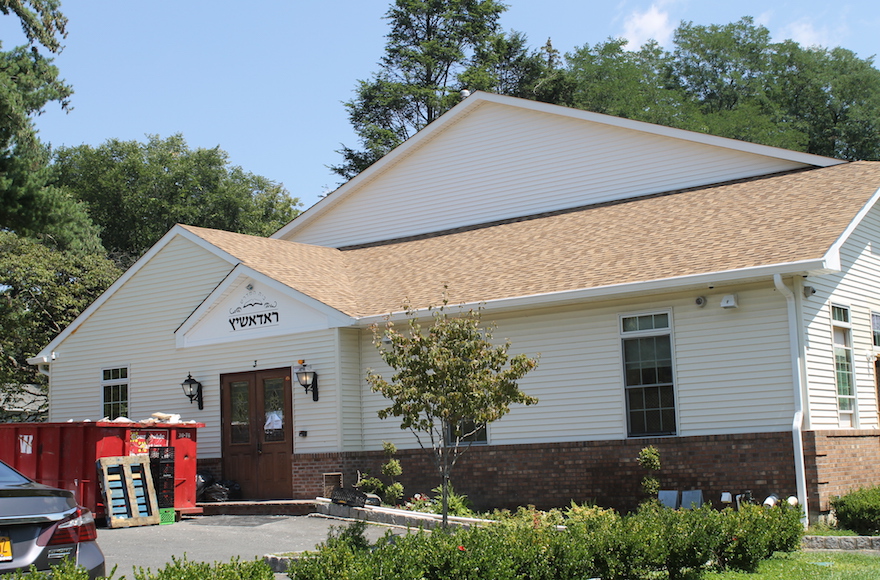 A synagogue in the town of Airmont, N.Y. Airmont has seen its haredi population boom in recent months as families seek larger houses at a more affordable price. (Ben Sales)
Advertisement

AIRMONT, N.Y. (JTA) — When Moshe Pinkasovits walks with his kids down the street on Saturdays in his new town, he has to watch out for drivers shouting anti-Semitic slurs.

The Pinkasovits family didn’t face this problem in the neighboring town of Monsey, a heavily haredi Orthodox enclave in New York state, near the New Jersey border. But since the family moved six months ago to Airmont, a pastoral town next door, some residents have made it clear they don’t want religious Jews around.

Pinkasovits’ neighbor, another haredi newcomer, has had eggs thrown in his yard and found his mailbox bashed in. People have leaned out of car windows and shouted “f***ing Jew” at Pinkasovits or just shrieked.

“What did we do wrong by being here?” his children ask him.

But Pinkasovits isn’t leaving. Despite the abuse, he loves living in Airmont, “in my own house with my own backyard.” He hopes his non-Jewish neighbors will come to accept the new religious Jews in town.

And if they don’t? It’s only a matter of time before the Jews become a critical mass, Pinkasovits says.

“It’s going to die out,” Pinkasovits said of the anti-Semitism. “People are moving here because this is how we want to live. Everyone, they’re all going to move out. Wherever you look down the street, you see ‘for sale’ signs hanging. I don’t mind living between them, but I also don’t mind if they leave and I get more Jewish neighbors.”

Pinkasovits is part of a wave of haredi Orthodox Jews who have spread out from Monsey to the surrounding towns. The towns — green, quiet and spread out — offer the large families spacious homes at an affordable price. Like Pinkasovits, haredi Jews who moved to the towns say they just want to live their lives in a nice place, just like their non-Jewish neighbors.

But the haredi influx has led to friction with longtime residents.

The battle has coalesced around the construction of an eruv — the artificial boundary that, according to Jewish law, allows Jews to push and carry objects outside their homes on the Sabbath and holy days. The eruv crosses into New Jersey towns adjacent to Airmont in order to accommodate the growing religious community and, while extending only a couple blocks over the border, has led to raucous debates, vandalism and a lawsuit.

Residents of Mahwah, a New Jersey town southwest of Airmont, have complained that the eruv breaks town ordinances because supports that mark the boundary are attached to public utility polls. Others have worried that a growing haredi population will mean a large group of residents who don’t support services like the public school system.

“I think people are reacting out of the unknown,” said Vince Crandon, a Mahwah resident who claims the eruv was erected illegally. “People will always say the worst when they are left without information.”

The Vaad HaEruv, or Eruv Association, expanded an eruv in the Monsey area around the beginning of July. Much of the eruv consists of existing telephone wires, but to make it kosher, the association had to install PVC pipes that reach from the bottom of the wire to the ground and are affixed to telephone poles. The pipes, called “lechis,” act as posts for the eruv. The Eruv Association pays for their upkeep.

The Eruv Association says it obtained the necessary permits from the utility company that owns the telephone poles and installed the eruv under local police supervision. But the Township of Mahwah claims the poles violate an ordinance that prohibits placing signs on the poles, and has threatened to issue summonses and demand that the poles be taken down. On Aug. 11, the Eruv Association filed a lawsuit against Mahwah, with Pinkasovits as a plaintiff, claiming that the demand to take down the lechis violates residents’ civil rights.

The battle isn’t just legal. Mahwah residents, in addition to residents from the neighboring town of Upper Saddle River, have mobilized in opposition to the eruv and what — or who — it represents. A petition opposing the eruv to “Protect the Quality of Our Community in Mahwah” has garnered 1,200 signatures. In late July, 200 Mahwah residents gathered to protest the eruv. And a new organization called Mahwah Strong, also against the eruv, has grown to around 3,000 members.

Local officials aren’t speaking to the media in light of the legal proceedings. But activists say the problem is that the Eruv Asscoation bypassed the town while putting up the eruv and broke the signage ordinance. If the Eruv Association obeyed the law, they say, there would be no problem.

“If someone puts up a garage sale sign, it gets taken down,” said Deborah Kostroun, Mahwah Strong’s spokeswoman. “We’re very diverse, and very inclusive, and we want people to come to Mahwah. But if you come to Mahwah, you do have to abide by the ordinances of the town.”

Kostroun did acknowledge, however, that residents also were wary of how a growing haredi population might change the area’s character. She pointed to the example of the nearby New York town of East Ramapo, where members of a booming haredi community were elected to the local education board and passed deep cuts in funding for the public schools, which hardly any haredi children attend.

In 2015, after accusations of mismanagement, the Board of Education there was placed under state oversight.

“There is a concern because of what is happening one mile away, five miles away, six miles away,” Kostroun said, referring to Monsey and East Ramapo. “Mahwah has one of the 10 best schools in the state, and property values are tied to how good the schools are.”

Others have expressed their opposition in less savory ways.

Beyond the abuse that Pinkasovits and his neighbors have endured, the PVC pipes have been vandalized, left cracked and broken. The online petition to “Protect the Quality of Our Community in Mahwah” was closed after 1,200 signatures because of several anti-Semitic comments. One referred to the “satanic verses of the Talmud.”

But Crandon said he was skeptical that any comments left anonymously online were actually from Mahwah residents. 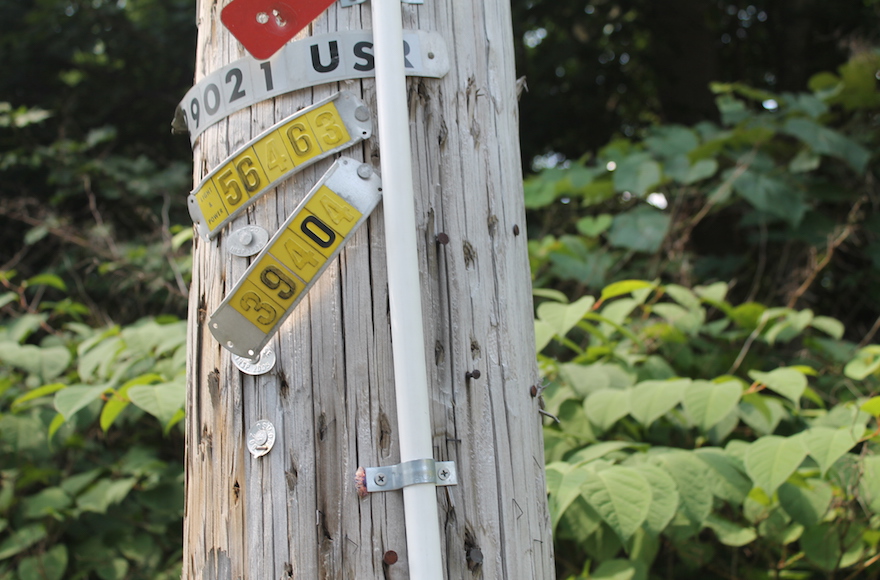 A PVC pipe affixed to a telephone pole in the town of Upper Saddle River, N.J. The pipe helps form an eruv for haredi residents of the area, but non-Jews in the town object to the way the pipes were installed. (Ben Sales)

Airmont doesn’t seem the place to cause a pitched ideological battle. The town of 25,000 has sloping, winding, tree-lined streets — often without marked lanes, sidewalks or much traffic. Large houses are spaced out with yards between them.

It’s a stark contrast to Monsey, which has seen an increasing number of multifamily homes built as its population has grown more than 25 percent since 2000, according to census data.

In Airmont, Jewish infrastructure already is dotting the town. Pinkasovits’ neighborhood alone has three official synagogues, plus another three or four unofficial minyans, or prayer groups, that meet in residents homes. One synagogue, the Congregation of Ridnik, about a 15-minute walk from Pinkasovits’ house, was erecting a fence last week as it planned to expand its sanctuary. The synagogue, attached to the back of its rabbi’s home on a residential street, is awaiting official approval for its expansion.

“Nobody is here to take away their homes,” said Moishe Berger, the congregation’s rabbi, regarding the town’s residents. “Nobody is interested in big development. Everybody wants to keep the neighborhood quiet and nice, but we need places to live.”

“For sale” signs dot the blocks surrounding the synagogue; there are three on Pinkasovits’ cul-de-sac alone. They are a symbol of some haredi newcomers’ confidence that when all is said and done, demographics will overwhelm whatever fights are happening now.

“I’m not worried,” said Shalom Kass, the man whose house was egged. “They’ll be gone in a few months, I think. You know how many houses are for sale? Half my block is on the market. There won’t be that many people left to be upset.”