Cue the camels! Israelis are throwing themselves one-of-a-kind outdoor weddings 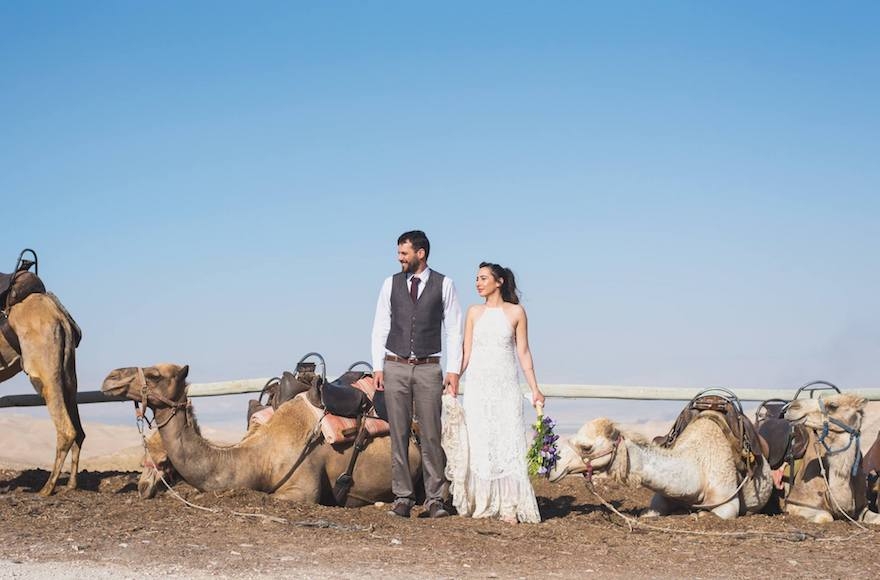 Shani Maaman and her husband, Vatkin, standing in front of camels at their wedding in the Judean Desert, May 11, 2017. (Dana Bar-On)
Advertisement

TEL AVIV (JTA) – In this tiny country, there are only so many places to have a wedding. Or so you would think.

But a growing number of Israelis are creating one-of-a-kind outdoor weddings from the ground up. In some cases, they even start with the ground.

“We brought in bulldozers for one couple,” said Ori Fuks, an Israeli wedding producer. “They wanted to get married on an avocado farm, so we built them a parking lot.”

“Nature weddings,” as they are sometimes called, are an increasingly popular option for young Israeli couples seeking unique nuptials. In recent years, an industry has emerged around the bespoke outdoor events, offering an alternative to the traditional wedding hall blowout.

Shani Naaman, a 31-year-old high-tech worker from Jerusalem, and her husband-to-be, Ran Vatkin, were determined to do their wedding themselves. With the help of Israeli wedding blogs and Facebook groups, they spent months planning and preparing a wedding they felt reflected who they are. 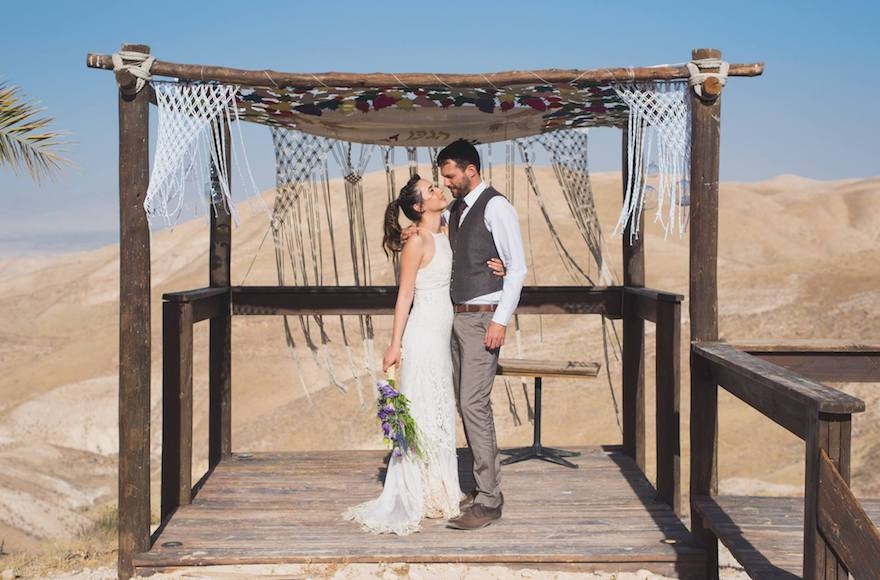 Shani Naaman and Ran Vatkin embracing under the huppah at their wedding, May 11, 2017. (Dana Bar-On)

Unlike some couples, Naaman and her fiance did not start from zero. Instead they converted a biblical tourism center, called Genesis World, into a bohemian desert getaway with Bedouin-style tents and cushions, billowing macramé decorations and a caravan of camels on hand. A DJ played world music-inspired beats late into the night.

“Nature weddings have become common, but I know that our wedding was very, very special,” Naaman said. “The nice thing about the place was that because it’s not for weddings, it doesn’t feel commercialized. They don’t charge you for every little extra. If you want another area to chill out, they give it to you no problem.”

Criticism of Israel’s mainstream wedding culture as superficial and expensive has become increasingly common in recent years. Fuks said many young Israelis are dissatisfied with the “copy and paste” approach of wedding halls, which they see as inauthentic. Having grown up working in two such venues owned by his family, in 2009 he started his own company called Bloom, which specializes in nature weddings at sites with little to no infrastructure.

“Young Israelis want their wedding to be their own,” he said. “They want to feel like they’re hosting you in their own home. That’s why we come and say, anything you want, we can create it.”

Fuks lets couples customize nearly every aspect of their wedding, starting with the location. In addition to the avocado farm, he uses forests, deserts, vineyards and fields. Last year he threw a wedding in a pallet factory. He works with suppliers to bring in the desired amenities, like generators for electricity, a kitchen and bar, a sound system, lighting, restrooms, tents and flowers. 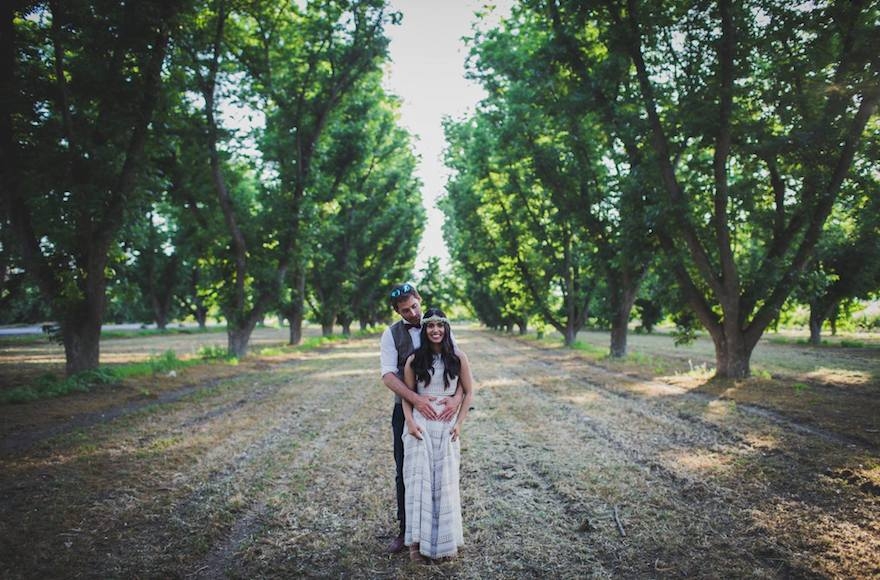 An Israeli couple poses at their wedding in the northern Israeli forest, May 29, 2017. (Yoav Alon)

Immediately after the event, everything is dismantled. No infrastructure can stay in place, Fuks said, because he rents the properties from private owners and may or may not have the required permits. Fortunately, he said, he has never had a wedding shut down.

Fuks said business has grown steadily over the years to about 30 weddings a year, mostly in the relatively sunny months between March and October. At the same time, he said he has seen his competitors in the nature wedding industry proliferate, from just a couple eight years ago to as many as 10 experienced competitors and countless upstarts today.

A saleswoman at one of Israel’s poshest wedding halls said the growing popularity of nature weddings has not cut into her clientele. But speaking on condition of anonymity to protect her job, she said she expects that to change in the near future. Among her Tel Aviv friends, she said, wedding halls are already out of style.

“People want their wedding to make them feel special,” she said. “But this industry is all about money. You spend money you don’t have, and we make money. In a couple years, everyone will be planning their own weddings.”

However, nature weddings are not necessarily less expensive. Fuks said his average wedding costs about $40,000, which is at the high end of the national average, according to a 2015 survey. Naaman’s $25,000 wedding is at the low end. 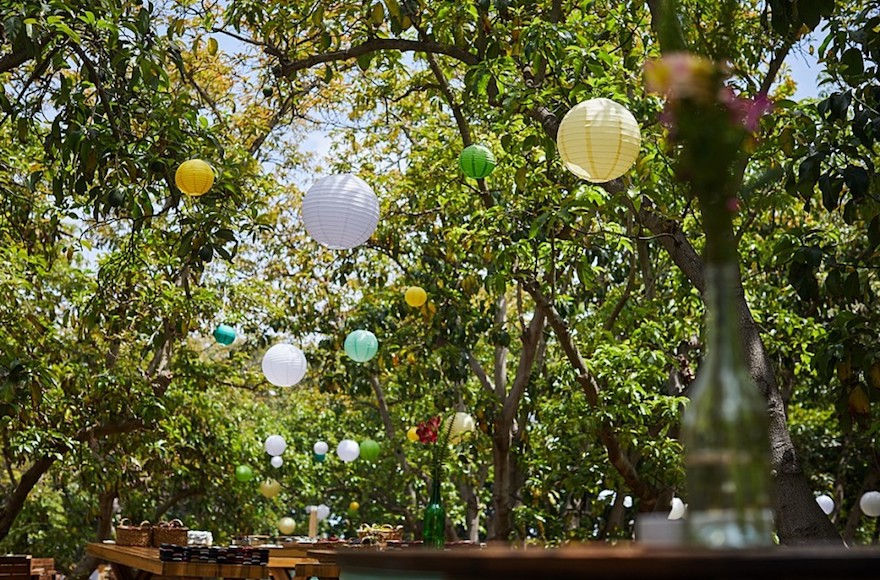 An avocado grove turned wedding venue waiting for guests in central Israel, May 19, 2017. (Courtesy of Bloom)

Lira Wieman, the owner of LW Events, said nature weddings are nothing new for her clients, who include Israel’s rich and famous. Nearly three-quarters of the weddings she does are in nature, she said. In May, she produced a high-profile desert wedding for model Shlomit Malka and actor Yehuda Levy.

“They wanted a Burning Man-style event,” Wieman said, referring to the American countercultural festival. “It was crazy — three days on an isolated ranch with a 24-hour DJ party.”

To some extent, Naaman’s wedding — which was also Burning Man inspired — was countercultural, too. Like a growing number of Israelis, she and her husband eschewed the Chief Rabbinate, the Orthodox authority that controls Jewish marriage in Israel. They opted for a secular humanist rabbi, and because only an Orthodox rabbi can perform a wedding in Israel, they have yet to be officially married.

Naaman said they plan to eventually marry abroad and have the union recognized by Israel’s secular bureaucracy, or to enter a common law marriage – two increasingly popular options.

She said their motivation for not going through the Chief Rabbinate was more personal than principled. They wanted to do the wedding on a date that is forbidden by Jewish law and, more important, to have an egalitarian ceremony. Under the macrame huppah, Naaman joined her husband in the traditional concluding ritual of breaking a glass in memory of the destruction of Jerusalem.

“We’re not like ‘anti’ people,” she said. “What guided us was making it our wedding, fit to us. We did what we needed to do.”