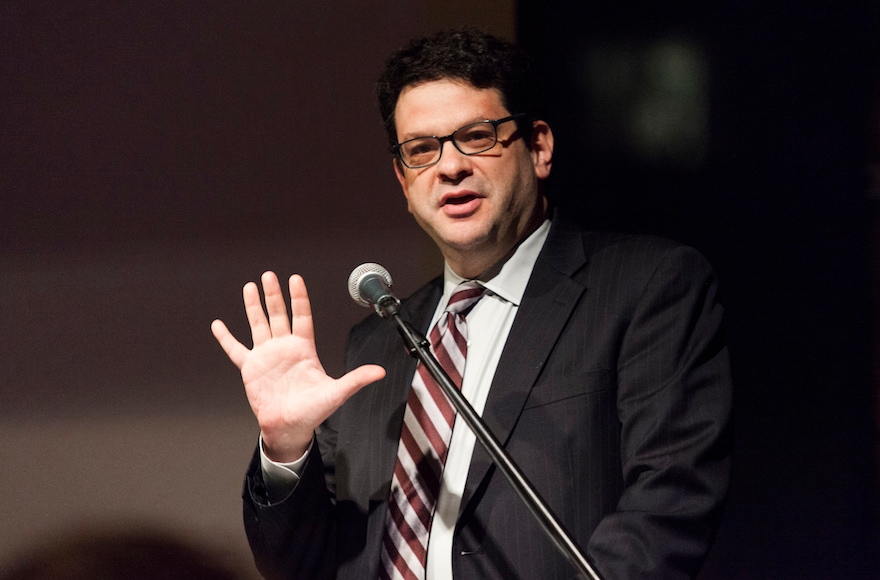 NEW YORK (JTA) — After the white supremacist rally in Charlottesville, voices abounded calling the demonstration an affront to American values.

Rabbi Shai Held called it an attack on God.

“One of the most fundamental claims Judaism makes about the world is that every human being on the face of the earth — black and white, male and female — is created in the image of God and is therefore infinitely valuable,” Held wrote last week in an essay on CNN.com. “An attack on other people’s humanity is by definition an assault on God.”

Persuading more people to talk about God has been at the core of Held’s message as his profile has risen this year. One of the founders of Mechon Hadar, a traditional egalitarian yeshiva in New York City, Held has emerged as a public voice on everything from President Donald Trump to race relations to masculinity. Along with regular CNN columns, his essays on the weekly Torah portion reach 7,000 people. They are now being published as a two-volume book, “The Heart of Torah” (Jewish Publication Society), due out in September.

“I’m not primarily interested in ‘is there a God or not?’ but what kind of a God is there,” Held, 46, said earlier this month, surrounded by shelves upon shelves of religious books in his suburban New York home — with more still in boxes. “I’m trying to make the case for a God who is about love and who asks human beings to live lives of love.”

On its face, the idea that Judaism should focus on God is anything but radical. But though Judaism pioneered the concept of monotheism, observant Jews tend to focus much of their energy on dissecting and analyzing Jewish law — poring over the legalistic Talmud in school and often defining their piety in terms of study and observance rather than “faith.”

Held, the son of a renowned Jewish Bible scholar, grew up with similar Talmudic inclinations. Though his home was secular, his parents sent him to Orthodox day school, where he learned to study complex rabbinic texts at an early age. He became observant on his own, studying in yeshivas in Israel before attending Harvard and gaining rabbinic ordination at the Conservative movement’s Jewish Theological Seminary. He co-founded Mechon Hadar in 2007, an outgrowth of the pioneering Kehilat Hadar independent congregation on the Upper West Side of Manhattan.

“If you say to a Jew who prays three times a day, ‘Do you talk to God?’ many of them will be like, ‘I’m not sure,’” Held said. “That’s kind of fascinating. I’m trying to be alive to the question ‘What does the Lord, your God, ask of you?’ I’m inviting people into that conversation.”

The Jewish emphasis on observance, Held says, has led religious Jews to surrender theological language to Christians. In his book, Held tries to reclaim it, writing about God’s “grace” and “election” of the Jews — terms historically central to Protestant Christianity. He also displays his affection for Christian biblical commentary. Held cites Christian scholars in the book and Walter Moberly, a Christian theologian, has a blurb on the back cover.

Held’s personal life has also steered him toward emphasizing God’s grace. His father, Moshe Held, a professor of Semitic languages and cultures at Columbia University, died when Held was a teenager, which led to difficult years with his mother. And he lives with a chronic illness that causes pain in his back, spine and legs, and subjects him to what he calls “debilitating fatigue,” sometimes forcing him to stop work for hours or days at a time. At times, Held says, the illness makes him focus on himself at the expense of others. But at its best, it allows him to understand the pain of others.

“I don’t mean you’re ill and you become kinder — I think often the opposite is the case — but certain kinds of capacities are born within you or expand within you,” he said. “The question of seeing people who are not seen became incredibly important to me in part through the experience of invisible illness.”

“[W]hat lifts this book from being an outstanding Torah commentary to a great work of religious thought and human moral development is Held’s profound theology that the heart of Judaism’s religious life lies in our relationship to God and fellow human beings,” he said.

Held’s theology of love courses through his essays on even the most legalistic of Torah portions. In his essay on Tzav (Leviticus 6:1-8:36), which details how to give several sacrifices, Held notes that the thanksgiving sacrifice must be eaten on the day it is offered — whether by the sacrificer, his relatives or nearby poor people. From that verse, he draws out that giving thanks also means sharing your good fortune with others.

“We are not meant to rest content with being recipients of God’s gifts but are asked to become givers ourselves,” Held writes. “God’s gifts are meant to flow through us and not merely to us.”

But Held doesn’t restrict himself to platitudes about the importance of gratitude and charity; across his writing, his message is explicitly political. His book, a collection of essays written before the 2016 presidential campaign, is rife with exhortations to love the stranger and take responsibility for poor people.

And his Facebook feed, updated almost daily, is rife with posts lambasting the president and his defenders that often invoke religion. Commenting last week on Jerry Falwell Jr.’s praise of Trump after the Charlottesville rally, Held wrote, “Amazing how a religious leader can declare his own moral, political, and theological bankruptcy in a mere 140 characters. Heed not the word of false prophets.”

“The society we live in will be judged by how it treats those who are weakest and most vulnerable,” Held told JTA. “I want to overcome ‘secular Jews are political activists and religious Jews do mitzvahs.’ I’ve never heard of a more false dichotomy.”

And while Held wants his book to appeal to Jews across the spectrum, his commitment to traditional, egalitarian Jewish observance is clear in everything from his philosophy to his word choice. He makes a point of keeping God gender neutral, never using “He” or “She.” Held also devotes attention to historically marginalized groups like immigrants and people with disabilities. That’s partly because, although he talks constantly about God, Held says Torah is really about caring for people.

“We built the Hadar beit midrash as a place where no human experience was ruled as outside the bounds,” he said, using the Hebrew term for “house of study.” “If there’s a human experience, Torah has to engage with it.”